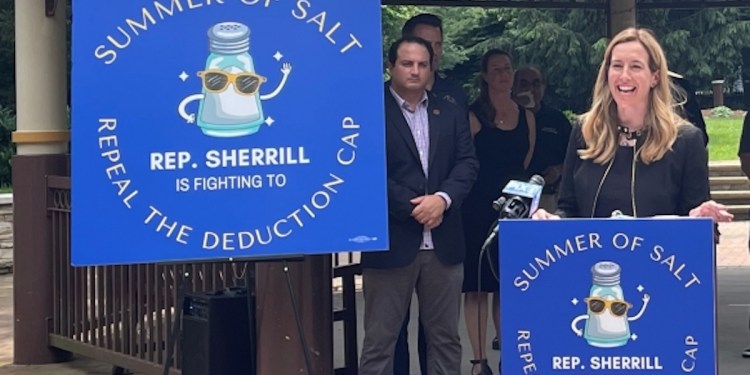 Gathered at the Dowlings Garden Gazebo,Sherrill spoke with local officials, community members, and union leaders to highlight how the SALT cap has affected their ability to make investments in the community and for families to make ends meet.

“The impact of the state and local tax deduction cap stretches to every town, county, and borough in my district,” said Sherrill. “For New Jerseyans in the 11th District, the SALT deduction cap has imposed a harmful double tax and has created one of the largest marriage penalties in the federal tax code.”

At the federal level, Republican leaders have indicated they would not remove the SALT cap as part of a larger infrastructure bill.

“It really doesn’t matter to me whether you’re a Democrat or a Republican, whether you’re a liberal or a conservative, the deduction—or the lack thereof—affects all of our bottom lines,” said Woodland Park Mayor Keith Kazmark, who attended the event.

“Repealing the SALT cap gives the American middle class access to the opportunities that help them thrive. Congress needs to repeal the SALT cap before it causes even more financial pain for working families who cannot handle another blow,” said Weingarten..

Gottheimer noted in April that the SALT deduction could be restored by ensuring tax cheats pay their fair share. IRS Commissioner Chuck Retting said the tax gap could be as high as $1 trillion per year, with Gottheimer saying this funding would be ample to address the SALT cap provision.

“We need the administration’s support and increased investment for enforceability for our current tax laws and help close this massive tax gap,” he said. “In other words, there is a way to do this by actually going after what people owe already.”