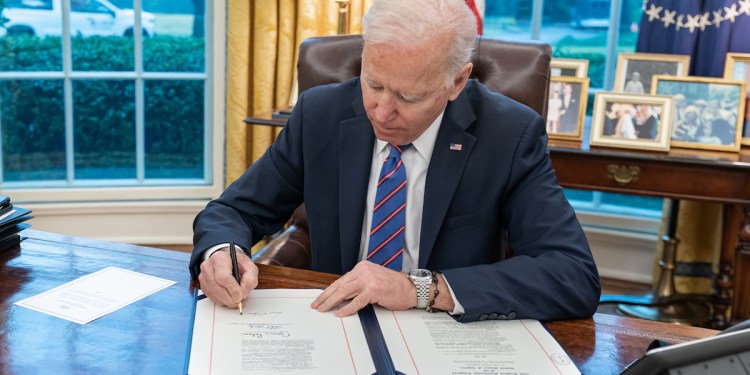 President Joe Biden signs the Saves Lives Act which authorizes the Department of Veterans Affairs to provide COVID-19 vaccines to veterans and their families Wednesday, March 24, 2021, in the Oval Office of the White House. (Official White House Photo by Adam Schultz)

Days before a voting rights bill was blocked by U.S. Senate Republicans, a Monmouth University poll found most Americans support both a path to easier access to early voting as well as requiring photo identification to vote.

The nationwide poll additionally found the public is more divided on expanding vote-by-mail and some national voting guidelines established for federal elections.

But maybe the most revealing on how divided the nation is, a third of the public believes “audits” of the 2020 election results, such as those being undertaken in Arizona, are legitimate efforts to uncover irregularities and continue to believe Joe Biden won the presidency only due to voter fraud.

“The bottom line seems to be that most Democrats and Republicans want to take the potential for election results to be questioned off the table. The problem, though, is they aren’t likely to agree on how to get there,” said Murray.

Seventy one percent of Americans believe in-person early voting should generally be made easier, compared with 16% who say it should be made harder. Conversely, 80% of those surveyed support requiring voters to show photo identification in order to cast a ballot with 18% opposing the measure.

Opinion on voting by mail, used by numerous states during the 2020 elections including New Jersey due to the coronavirus pandemic, is more divided as 50% want it be made easier and 39% say it should be more easily available.

In a more partisan divide, only Democrats back making voting by mail easier to do, with 84% supporting this idea compared to just 40% of independents and 26% of Republicans.

Nearly 7 out of 10 respondents—69%—support establishing national guidelines to allow vote-by-mail and in-person early voting in federal elections in every state. Just 25% oppose this idea. Support for establishing national voting guidelines on these issues is overmelying for comes from 92% of Democrats (92%) and Independents (63%) while barely a majority (51%) for Republicans.

According to Monmouth, the overall number of registered voters who considered voter fraud to be a major problem (36%) in 2012 was similar to the current results, although 20% who said it was not a problem was lower than the 29% it is today. The growth is driven by an increase among Republicans since 2012 from 51%, while declining by the same amount among Democrats from 23%.

“Disenfranchising eligible voters is nominally a bigger concern than voter fraud, but the sizable number of Americans who cling to the view that fraud determined the 2020 election poses an intractable challenge for reaching any public consensus on voting access,” said Murray.

The validity of the 2020 Presidential election continues to linger as 32% of Americans believe that Joe Biden’s victory was due to voter fraud—a number unchanged since the November election. The polling outfit noted the number of “Republicans” who believe this has been trending down while the number of independents who agree has ticked up. Monmouth officials believe this is a product of a shift in how Republicans identify themselves, with some moving their self-affiliation from being partisan to being an “independent” who leans partisan.

When all Republican identifiers and leaners are combined, the number who believe Biden won only because of voter fraud has been fairly stable (63% now, 64% in March, 69% in January, and 66% in November). Furthermore, 14% of the American public say they will never accept Biden as president, including 29% of Republicans and Republican leaners.

“The continuing efforts to question the validity of last year’s election is deepening the partisan divide in ways that could have long-term consequences for our Democracy, even if most Americans don’t quite see it that way yet,” said Murray.

The poll found 57% see audits of the 2020 election results that are ongoing, including in Arizona, or planned as primarily partisan efforts to undermine valid election results. Thirty three percent defend these actions as legitimate efforts to identify possible voting irregularities. When asked about the impact of these audits, 40% say they will weaken American democracy versus 20% who say they will strengthen our democracy, while 35% say they will have no impact.

Overall, 38% of the American public expects the impact of these audit efforts to be long-lasting, including nearly two-thirds of those who believe they will either weaken (63%) or strengthen (64%) our democracy.