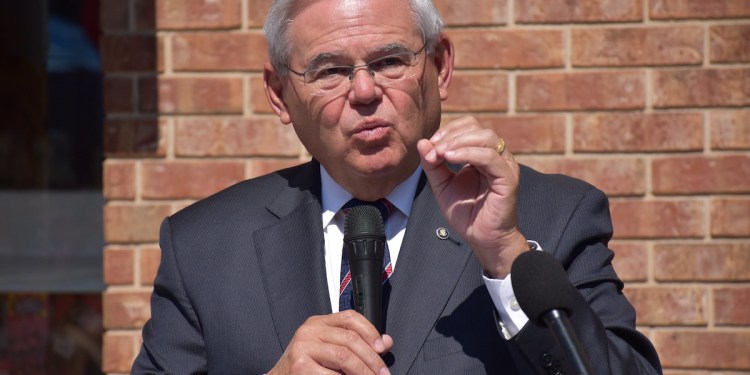 Sen. Bob Menendez reignited calls for a 9/11-style commission to study the U.S. response to the COVID-19 pandemic.

“Never again must the United States of America be caught with its guard down in the face of a deadly and contagious virus,” said Menendez about an investigation whose purpose would be to develop a series of best practices and recommendations to improve readiness for future public health emergencies.

The push comes as New Jersey for the first time since July 30, 2020, did not report an in-hospital COVID-19 related death on June 25.

Meeting with healthcare workers and families of those who lost loved ones to COVID-19 at University Hospital in Newark on June 21, Menendez demanded bipartisan and bicameral legislation that he co-authored be voted on.

Calling the lack of movement on the bill a “national outrage,” Menendez argued the pandemic, which claimed 200 times the number of lives lost on 9/11, should garner broad support.

The commission would include a focus on the estimated 5.4 million Americans were contending with PTSD due to the loss of a loved one to COVID-19.

“We believe that a nonpartisan, independent, equitable, fully funded, comprehensive, and fair COVID commission must center the voices, experiences, and needs of the communities most gravely impacted by this virus—not only the bereaved but also frontline healthcare workers and COVID long haulers,” said COVID-19 Loss Support for Family & Friends founder Sabila Khan, who lost her father to COVID-19 and shared her story during the press conference.

“We must take a full and unvarnished look at what happened and why, so that we can understand how to make sure it never happens again,” she continued.

The National Coronavirus Commission Act of 2021

The bill would establish a commission to investigate the pandemic response, which would focus on:

The act was introduced after Menendez and Collins introduced the National Coronavirus Commission Act of 2020 in September 2020.

As of June 25, the cumulative number of confirmed coronavirus cases in New Jersey was 892,308 with 309 total new PCR cases reported. There were 83 probable cases, bringing the cumulative total of antigen tests to 130,135. The total number of individual cases for the state is 1,022,443.

As for those that have passed, the state reported 12 new deaths, bringing that total to 23,730. The state listed probable deaths at 2,698, bringing the overall total to 26,428. State officials noted no deaths occurred in the last 24 hours of reporting that has not yet been lab confirmed.

Officials reported 302 patients were hospitalized; 233 cases were confirmed and 72 are under investigation. By region, there were 156 in the North, 75 in the Central and 71 in the South.

Of those hospitalized, 58 are in intensive care units and 28 on ventilators. A total of 61 patients were discharged, while 33 were admitted.

Another 718 cases are still under investigation to determine where the person resides.

Health officials noted 30 long-term care facilities are currently reporting at least one case of COVID-19, accounting for a total of 643 of the cases, broken down between 246 residents and 397 staff.

The state’s official death total will now be reported as those that are lab confirmed, sits at 8,062 on June 25. The facilities are reporting to the state 7,891 residents deaths and 144 staff deaths.