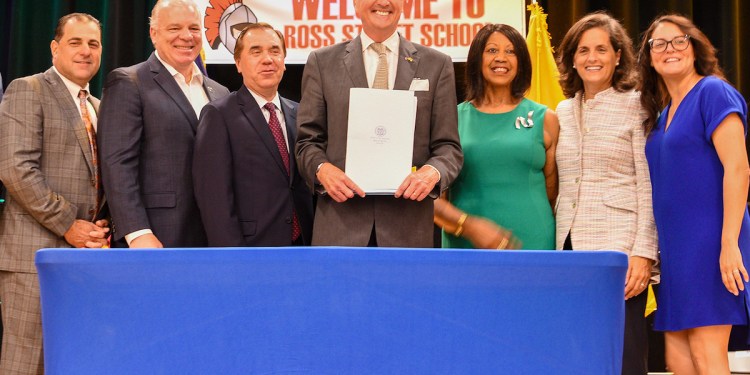 Gov. Phil Murphy proudly signed into law the Fiscal Year 2021 $46 billion budget, one he described as being “bold” in meeting New Jersey’s current and future obligations.

During a signing ceremony in Woodbridge on June 29, Murphy said the budget continues the progress his administration has made over the past three years to protect property taxpayers, invest in public schools and infrastructure while restoring New Jersey’s fiscal integrity.

“When people hear ‘progressive,’ they don’t associate the word ‘responsible’ with that word,” said Murphy. “But we are proving them wrong. This is both proudly progressive and a very deeply fiscally responsible budget.”

“This year’s budget represents the culmination of a four-year journey to fix many longstanding problems in New Jersey. This is a budget that invests in our middle-class and working families—supporting both those building their families and careers and those who are living out their richly-deserved retirements.“

The $46.38 billion spending proposal includes a nearly $2.4 billion surplus, which is 5.1% of budgeted appropriations, that Murphy trumpeted being above the average of the Gov. Chris Christie administration.

Among the expenditures the governor highlighted include setting aside $3.7 billion for the Debt Defeasance and Prevention Fund Established through companion legislation—$2.5 billion of which will go towards retiring State debt, which is expected to generate savings of over half a billion dollars. The other $1.2 billion will support capital construction that replaces current or future debt issuances.

The budget features a record total payment of $6.9 billion to the State Pension Fund, which includes the full $6.2 billion pension contribution and an additional $505 million pre-payment towards subsequent years.

“This budget also places a premium on fiscal responsibility—making good on our promise to public employees by providing above and beyond the full pension payment for the first time in a quarter of a century, responsibly setting aside funds to repay debt, and making New Jersey more resilient to weather future health emergencies,” said Murphy.

The budget will expand multiple tax relief programs, including those aimed at providing relief for seniors and middle-class families. For those targeted at the middle class, beginning in July, over 760,000 New Jersey families will receive up to a $500 tax rebate due to the Millionaires Tax enacted by the Governor and the Legislature last Fall. The estimated program cost is $319 million.

“This budget ensures that every resident will have the opportunity to rebound from the pandemic and benefit from the many opportunities that New Jersey offers,” said Senate President Steve Sweeney (D-3). “The investments are immediate and important, including direct assistance to working families, rebates for homeowners, as well as rental and utility assistance for those struggling most.”

Two programs to put more money in the pocket of seniors were promoted by Murphy during his address. The Earned Income Tax Credit (EITC) age of eligibility will expand to those over age 65, as well as lowering it to 18 from 21. The new limits are projected to help another 90,000 residents—roughly 70,000 over 65 and 20,000 between the ages of 18 and 21.

“This budget invests in our economy, invests in our residents and will make us more resilient in preparing for future challenges,” said Assembly Budget Chair Eliana Pintor Marin (D-29). “The impact of tax relief in this budget, particularly under the increase in the Homestead Rebate Program and expansion of the Earned Income Tax Credit, will ensure New Jersey is more affordable and a state where people can thrive and build a life.”

The second is increasing the threshold for retirement income that is allowed to be excluded from taxation from $100,000 to up to $150,000, helping nearly 70,000 more senior taxpayers.

“This budget presented us with an extraordinary and somewhat unprecedented opportunity to reimagine what we’d like our economy, our schools, our workplaces, and our communities to look like thanks to the dramatic about-face our economy has taken in recent months,” said State Treasurer Elizabeth Maher Muoio. “We have seized that opportunity to make historic investments across our state.”

Among the initiatives are the Garden State Guarantee will provide two years of free tuition at four-year institutions of higher education for students in their third and fourth years with household incomes of less than $65,000; encourage college savings for lower-income residents by providing  matching payments up to $750 for taxpayers with incomes below $75,000 who contribute to NJBEST; and increases in Tuition Aid Grants and the Educational Opportunity Fund spending over FY 2021.

The budget include some of the first allocations of the federal American Rescue Plan’s State Fiscal Recovery Fund (SFRF) dollars, which will be earmarked for school safety to ensure they can reopen in the Fall, allowing parents to return to work, and bolster New Jersey’s public health infrastructure to make sure the State is ready for the next emergency.

“This is a responsive and responsible budget that will help guide our recovery from the most devastating public health crisis of a lifetime,” said Senate Budget and Appropriations Committee Chair Paul Sarlo (D-36). “It establishes a partnership between the Governor and the Legislature for the use of the federal aid New Jersey received from the American Rescue Plan. This shared responsibility will ensure the best use of these funds over the next few years.”

Republcian critics of the bill said the budget did not go far enough in offering tax relief for New Jersey residents as well as decrying the budget process that they see as moving too quickly without significant oversight from lawmakers and the public alike.

But Murphy said this is a budget that pays the state’s bills and invests in a progressive budget that provides “a brighter future.”

“(The budget) ensures a stronger, fairer, and healthier future for the generation born and reared in the shadow of an unprecedented pandemic,” said the governor.

“Together, we are providing broad and equitable pre-K through higher education opportunities for more of our students, making sure every child in New Jersey has health care, delivering substantial tax relief to working and middle-class families, investing real dollars to make the dream of homeownership an affordable reality, helping seniors remain in their communities long into their golden years, and providing hundreds of millions in relief for small businesses,”