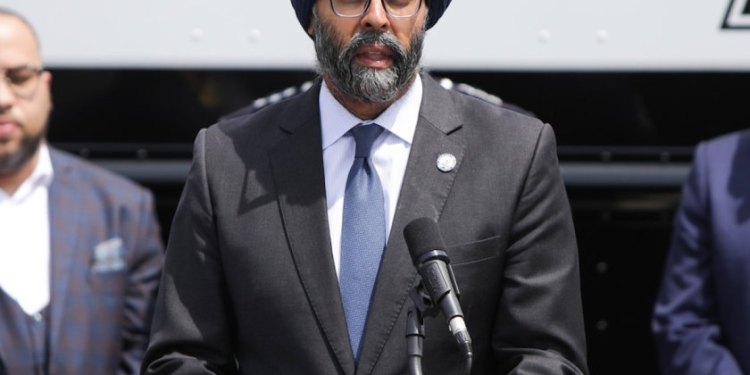 New Jersey Attorney General Gurbir S. Grewal is moving on from his post as the Garden State’s top law enforcer to the ranks of federal law enforcement where he will lead the Securities and Exchange Commission’s (SEC) Division of Enforcement.

The SEC announced Grewal’s appointment will be effective July 26. A nominee of Gov. Phil Murphy, Grewal has served as AG since January 2018 and gained attention for his efforts to curb gun violence, overhaul policing in New Jersey, and taking on former President Trump in the courts.

Murphy called Grewal “an invaluable member of our administration and a dedicated public servant to the residents of New Jersey.”

“Through his efforts standing up to the Trump administration’s attacks on New Jersey and our diverse communities, instituting historic reforms in policing, and leading the fight against gun violence…we’ll miss his leadership,” Murphy said in a June 29 press statement. “I know he’s the right person to protect investors all across the nation, and I congratulate SEC Chair Gensler for this outstanding selection.”

Grewal’s move to the top spot in SEC’s Enforcement Division will put him in charge of going after bad actors on Wall Street, a job for which New Jersey’s senior U.S. Senator, Bob Menendez, believes Grewal is well-prepared.

“I can’t think of a better, more qualified individual than Gurbir Grewal to lead the SEC’s enforcement efforts, protect investors, uphold the nation’s securities laws, and keep Wall Street honest,” Menendez said. “New Jersey is a safer, fairer, and more accepting place because of his service.”

Grewal served as Bergen County prosecutor prior to serving as AG for New Jersey. Earlier in his career, he was an Assistant U.S. Attorney in the Criminal Division of the U.S. Attorney’s Office for the District of New Jersey, where he served as Chief of the Economic Crimes Unit from 2014 to 2016 and oversaw the investigation and prosecution of all major white collar and cybercrimes in the District of New Jersey.

He also previously served as an AUSA in the Criminal Division of the United States Attorney’s Office for the Eastern District of New York, where he was assigned to the Business and Securities Fraud Unit.

“He has had a distinguished career as New Jersey’s chief law enforcement officer and as a prosecutor at both the local and federal levels. I look forward to working closely with him to protect investors and root out wrongdoing in our markets,” Gensler said.

Grewal said in a statement that the SEC’s Enforcement Division “has a critical role to play in finding and punishing violations of the law.”

“I’m excited to get to work with the talented team of public servants to uncover and prosecute misconduct and protect investors. I thank Governor Murphy for the opportunity to serve the people of New Jersey and all of the colleagues with whom I’ve had the pleasure to work during my career in the state.”

Grewal said he was pleased that Bruck would be filling his post and described him as “one of the sharpest legal minds and finest public servants that I have ever met.” Bruck is now charged with leading the Department of Law & Public Safety, which employs more than 3,700 uniformed officers, 750 lawyers, and thousands of additional staff, including investigators, regulators, and administrative personnel.

A New Jersey native, Bruck has been part of the executive leadership team at the Attorney General’s Office since January 2018.

“We entered office together on January 16, 2018, and since that day he has worked tirelessly to stand up for the rights of New Jerseyans, having helped shape some of our office’s most important policies and respond to many of our state’s most complex legal challenges,” Grewal said in a statement.

Before joining the AG’s Office, Bruck served for five years at the U.S. Department of Justice. During his DOJ stint, he served as an Assistant U.S. Attorney at the U.S. Attorney’s Office for the District of New Jersey, and held several roles in the office of Deputy Attorney General Sally Yates, including Senior Counsel, Deputy Chief of Staff, and Acting Chief of Staff.

Before joining DOJ, clerked for Chief Justice Stuart Rabner of the New Jersey Supreme Court. He is an alumnus of Princeton University and Stanford Law School.

Bruck grew up in Montclair and Mendham and currently resides in Trenton with his husband and infant daughter.

Coronavirus Continues to Impact July 4th, Vacation Plans—But to A Lesser Extent Then A Year Ago

Coronavirus Continues to Impact July 4th, Vacation Plans—But to A Lesser Extent Then A Year Ago