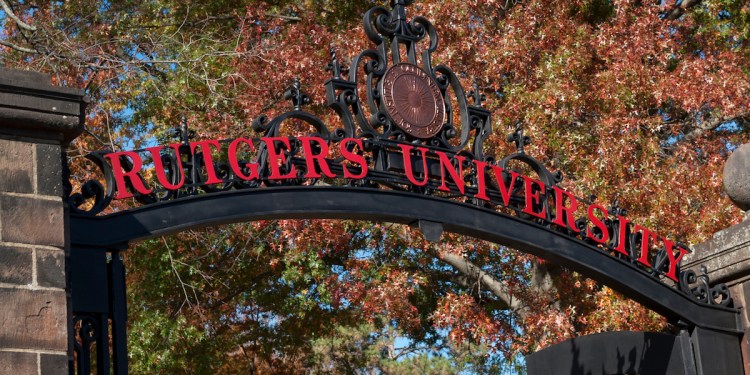 Rep. Josh Gottheimer is calling for action from Rutgers President Jonathan Holloway after what the Congressman defined as misinformation about Israel from a teacher’s union at the state university.

At issue is a statement signed by members of the Executive Board of the Part-Time Lecturer Chapter of Rutgers AAUP-AFT (Local 6324), which called on the American Federation of Teachers to divest itself of all Israeli bonds and for the United States government to cease all financial support to Israel at once.

In its statement, the Rutgers teachers declared that “as teachers and union members, we can no longer allow ourselves to be complicit in the illegal acts of the Israeli government,” and accused Israel of “military actions that have targeted, killed and maimed civilian populations” and of upholding “a regime of legalized racial discrimination perpetrated against the Palestinian people.”

Gottheimer asked the University President to speak out against the misinformation that he termed “alarming.”

“It is important to recognize that invective which singles out, disparages, delegitimizes, or demonizes Israel can and in many cases does fall outside of bounds,” Gottheimer wrote in the letter to Holloway. “I would ask you to please speak out clearly and quickly against this hate-filled misinformation campaign and rhetoric.”

The U.S. has witnessed a sharp rise in a series of antisemitic incidents across the country since an outbreak of fighting in May between Israel and Hamas terrorists.

The union said it supports the position of Trade Union Action for Justice in Palestine, international human rights groups such as Human Rights Watch and the Israel-based B’Tselem, who have designated these practices of Israel as “apartheid” and “a regime of legalized racial discrimination perpetrated against the Palestinian people.”

Gottheimer cited concern for the well-being of Rutgers students who identify as Jewish or pro-Israel and who worry that they might face a hostile environment in the classroom or on campus in such a climate.

“Rutgers’ part-time lecturers are entitled to hold their own opinions, even those which may be disagreeable,” stated the congressman. “(But) considering recent events, it is important to send a clear message that all Rutgers students and community members, including those who identify as being Jewish or pro-Israel, will not be singled out, penalized, or made to feel unwelcome at our state’s flagship university.”

Gottheimer’s letters comes in the wake of a controversial elementary school student project in Tenafly that caused outrage in the community due to an essay that was hanging in the hallways from the perspective of Adolf Hitler and later dressed as Hitler during the presentation. The project included a biography, written in the supposed voice of Hitler, stating, “I was very popular,” and asked, “I was pretty great, wasn’t I?”

The teacher’s union position comes at a time when Democrats in the radical left wing, most notably Sen. Bernie Sanders and Rep. Alexandria Ocasio-Cortez, questioned the historically strong bond between the U.S. and Israel.

All of this has led the Congressman to ask President Joe Biden to engage in efforts to combat the surge of anti semitic rhetoric and violent incidents targeting Jews throughout the United States.

“When this type of violence and inflammatory rhetoric goes unaddressed, it can fuel increasing hatred and violence, and lead to unspeakable acts against Jews. That is why we need a united, bipartisan, national-level commitment to confront and address the threat of antisemitism head-on,” Gottheimer wrote in a letter with colleagues Elaine Luria (D-VA), Kathy Manning (D-NC), and Dean Phillips (D-MN) to the President. “Antisemitism is wrong, and it deserves to be unequivocally condemned by all.”