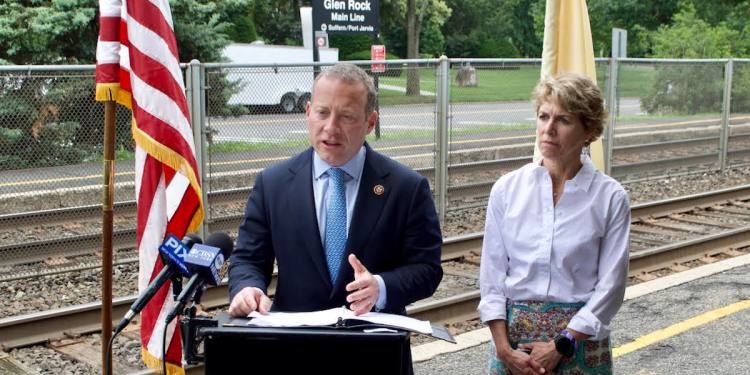 Rep. Josh Gottheimer came to the heart of the 5th Congressional District on July 13 to push why an infrastructure deal is so needed in North Jersey.

Along with Assemblywoman Lisa Swain (D-38), Gottheimer made the case for supporting the trillion dollar agreement, encouraging a stand-alone vote on the bill supported by the Biden Administration at the Glen Rock train station

Gottheimer highlighted how the bipartisan infrastructure framework will invest in repairing and improving New Jersey public transit to help improve the commutes of North Jersey residents. The bipartisan infrastructure package has been agreed to by the White House and a bipartisan group of Senators. The Gottheimer-led Problem Solvers Caucus formally endorsed the plan last week and called for the package to be brought to the House for a vote.

Deal on the Table

“Thankfully, in Washington, there is a bipartisan infrastructure deal—with bicameral support — on the table now, with the backing of the White House, which includes critical investment in New Jersey’s transit system—from the rails and train cars to the Gateway Tunnel,” stated Gottheimer. “It’s time to bring it up for a standalone vote, without any delays.”

The Congressman offered grim stats that showed the investments are desperately needed to upgrade infrastructure in New Jersey. NJ Transit trains are ranked the worst in the nation as residents who take public transit spend an extra 82.7% of their time commuting and 22% of trains and other transit vehicles in New Jersey are past useful life.

“Even before the pandemic, because of outdated technology and train cars and tracks in need of repair, NJ Transit often couldn’t deliver, and far too often, commuters sat delayed,” said Gottheimer.

He added, “These delays sapped productivity in the morning by being late to work—and put a lot of sad faces on parents racing home in the evening, when folks can’t tuck in their kids. In fact, it’s often the reason many young families tell me they won’t move to Jersey.”

The roads and bridges do not offer a much better alternative. The Garden State has the third worst roads in the nation, with more than 500 bridges in New Jersey currently rated as deficient and a third of New Jersey’s bridges needing repairs. As a result on driving on damaged roads, each New Jersey driver pays $713 per year in costs and repairs to their vehicles.

“For Jersey to compete, to attract families and businesses, and for America to win in the global marketplace, we must turn this around,” stated the Congressman. “China spent $3 trillion dollars on infrastructure outside of their country last year. And we’re here putting bubble gum and scotch tape on our bridges to keep them from crumbling.”

“This investment will modernize our public transit, finally improve our roads and bridges and get Gateway back on track, and make our infrastructure and transit resilient for future use — all while greatly enhancing the lives of all our commuters — which is a win-win-win for North Jersey.”

The Bipartisan Infrastructure Framework will invest more than $312 billion to transform the nation’s transportation infrastructure and make it more resilient, including investing $110 billion in roads, bridges, and major projects. Additionally, it moves forward in modernizing public transit with a nationwide investment of $48.5 billion and $66 billion investment in passenger and freight rail — the largest federal investment in public transit in history and the largest federal investment in passenger rail since the creation of Amtrak.

“This is great news because the bottom line is: we can’t afford to wait any longer. In all, this is the largest investment in infrastructure since President Eisenhower began the Interstate Highway System,” stated Gottheimer.

Both lawmakers framed the argument outside of just improving the physical infrastructure. They touted the economic boost as well as improving the environment.

Swain noted the need for investment was not just about fixing mass transit.

“Transit is so important to our residents, our commuters,” said Swain. “It’s not just an economic issue of getting our residents back to work—it’s an issue of pollution. We need to get people out of cars and into our trains.”

“The bipartisan infrastructure deal will help New Jersey and our transit systems…greatly improve the lives of our commuters,” said Gottheimer. “That means that Amtrak, NJ Transit, and our region’s public transportation and light rail options will finally have the federal investment they need to improve for the 21st century — and get our workforce to and from work on time, and back home safely.”

On the economic front, Gottheimer predicted infrastructure investment will create good-paying jobs and critical economic growth across New Jersey, positioning the state and the nation to succeed in the 21st century. He cited a Congressional Budget Office state that a single dollar in infrastructure can have as much as a $2.50 impact on our GDP.

“That’s a real return on investment,” the congressman stated. “This will help our economy in the short- and long-term, and it will help it operate more efficiently. Studies even show that public investment in infrastructure also leads to productivity growth in the private sector.”

“We must get this done. We simply have no other choice.”