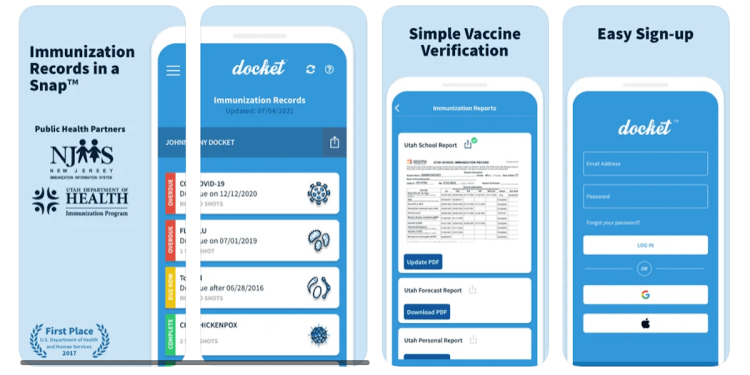 In an effort to expand access to immunization records, a new app from the New Jersey Department of Health (NJDOH) makes it easier for individuals and families vaccinated in the state to access their COVID-19 vaccination record.

Murphy Administration officials stated the purpose for the Docket app is to allow fully vaccinated residents in New Jersey to easily access their COVID-19 record digitally in case they lost their vaccination card or want quick access to their record and not the beginning of a passport system in the Garden State.

“To be absolutely clear, this is not a passport,” stated Gov. Phil Murphy at a press briefing July 12. “Docket is intended to solely give residents easy access to their COVID vaccination record, especially if their vaccination card has been damaged or lost.”

Murphy reiterated that his position has not changed on a vaccine passport system, stating “I’m not ‘hell no,’ but we continue to need to make more progress on the equity front, and progress is being made.”

“We’ve come a long way, but in particular in black and brown communities, we’re not yet where we need to be,” continued Murphy. “I continue to believe until we are—and we’ve not —and until we’ve given it everything we’ve got and that everyone has had fair access to the vaccine, then while I’m open-minded, I don’t think the timing is right.”

But Republicans, led by State Sen. Michael Testa (R-1), are worried this is the first step toward a vaccination passport program in the Garden State despite assurances by the governor. Testa sponsored legislation (S-3674) that would prohibit the state from requiring private businesses to confirm a person’s COVID-19 vaccination status as a condition for entry.

“Gov. Murphy hasn’t been transparent with New Jerseyans during the pandemic and he’s refused to rule out the use of vaccine passports. We need to be vigilant to ensure this app doesn’t suddenly morph into a vaccine passport that people are forced to display everywhere they go,” said Testa.

Individuals with an email or phone number on file with the New Jersey Immunization Information System (NJIIS) can access and download their COVID-19 vaccination record using the app. The app, developed by New York-based Docket Health, Inc., can provide access to family members’ COVID-19 records through a shared account as well.

“If you don’t have your vaccination card with you or you have lost it, you can easily access your record through the app,” said New Jersey Department of Health Commissioner Judith Persichilli. “Providing this COVID-19 record digitally, as is done with other health records, simplifies access to consumers.”

State officials said the information in Docket will be used only to provide consumers with electronic access to their own COVID-19 vaccination record. NJIIS captures an individual’s name, phone number, and demographic details which were shared at the time of vaccination. This data is used to show a person’s COVID-19 immunization record through the app.

The app currently only displays COVID-19 vaccination details, however, future plans include expanded access for other full immunization histories. Docket is a CDC-approved application currently used in Utah and planned for rollout in additional states.

“The app adheres to federal and state standards for data security and privacy,” said Persichilli.

As of July 14, the cumulative number of confirmed coronavirus cases in New Jersey was 896,191 with 371 total new PCR cases reported. There were 136 probable cases, bringing the cumulative total of antigen tests to 130,823. The total number of individual cases for the state is 1,027,014.

As for those that have passed, the state reported five confirmed deaths, bringing that total to 23,811. The state listed probable deaths at 2,716, bringing the overall total to 26,527. State officials noted four deaths occurred in the last 24 hours of reporting that has not yet been lab confirmed.

Officials reported 310 patients were hospitalized; by region, there were 149 in the North, 88 in the Central and 73 in the South. Of those hospitalized, 50 are in intensive care units and 22 on ventilators. A total of 46 patients were discharged.

Another 723 cases are still under investigation to determine where the person resides.

Health officials noted 18 long-term care facilities are currently reporting at least one case of COVID-19, accounting for a total of 70 of the cases, broken down between 37 residents and 33 staff.

The state’s official death total will now be reported as those that are lab confirmed, sits at 8,063 on July 14. The facilities are reporting to the state 7,878 residents deaths and 144 staff deaths.