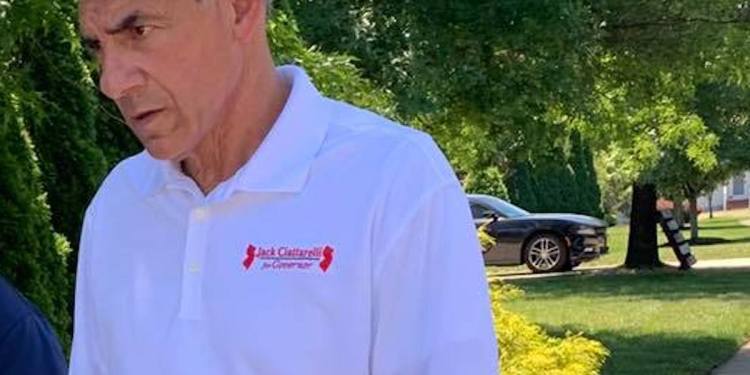 Gov. Phil Murphy’s Republican challenger, Jack Ciattarelli, defended himself July 14 against criticism from LGBTQ advocacy groups and Murphy backers after video surfaced of Ciattarelli saying he would roll back New Jersey’s LGBTQ curriculum that is now required in public schools.

LGBTQ groups called Ciattarelli’s comments during a June campaign stop hateful and divisive, but Ciattarelli maintained in an interview on NJ 101.5 that the sensitive and intimate topics covered in the curriculum are best taught by parents, not New Jersey’s public schools.

“I think this race—we’re winning, because I’ve gone from being anti-woman to anti-Semite to now anti-gay,” Ciattarelli, a former State assemblyman, quipped on 101.5’s Deminski and Doyle show.

He added: “I’m saying, as governor, we need to make some changes. These are the kinds of things that parents should be doing, not our schools or our teachers.”

Ciattarelli had discussed the curriculum, much of which is slated for rollout in New Jersey’s public schools this fall, during a June 26 campaign stop at a gun range. His comments aired in a video first obtained by the Gothamist and WNYC and now posted to YouTube.

In the video, Ciattarelli tells listeners he feels lucky that his children are “in their 20s and I don’t have to be dealing with what you’re dealing with right now.”

Ciattarelli was referring to two New Jersey laws, both of which Murphy signed. The first, which Murphy signed on March 1, takes effect for the upcoming, 2021-2022 school year. The legislation is brief and requires each New Jersey school district to “incorporate instruction on diversity and inclusion” in grades Kindergarten through 12 as part of the district’s implementation of the New Jersey Student Learning Standards.

The law stipulates that the instruction shall incorporate lessons that promote “economic diversity, equity, inclusion, tolerance, and belonging in connection with gender and sexual orientation, race and ethnicity, disabilities, and religious tolerance.”

Moreover, the law stipulates that K-12 public school instruction “encourage safe, welcoming, and inclusive environments for all students regardless of race or ethnicity, sexual and gender identities, mental and physical disabilities, and religious beliefs.”

An earlier law that Murphy signed in January 2019 requires New Jersey’s public middle schools and high schools to provide instruction that portrays the “political, economic, and social contributions of persons with disabilities and lesbian, gay, bisexual, and transgender people.” That law took effect for the 2020-2021 school year.

The New Jersey Democratic State Committee LGBTQ Caucus was among the many LGBTQ groups to denounce Ciattarelli’s comments. “Let us be unequivocally clear: inclusive curriculum is not ‘teaching sodomy to 6th graders,’ and only bigots would say that. Ciattarelli’s willingness to misrepresent our community for (a few) votes shows his true character,” the group said on Twitter.

Murphy’s communications director, Mahen Gunaratna, tweeted as well: “We don’t need a mini-Trump contender for gov who caters to the most extreme elements of the right-wing and seeks to divide us. That’s what Jack Ciattarelli represents.”

Additionally, Garden State Equality Founder Steven Goldstein was quoted in the New Jersey Globe, asking: “Who the hell does Jack Ciattarelli think he is?  By equating LGBTQ relationships with ‘sodomy,’ Jack is now Frankenstein’s clone of Marjorie Taylor Greene for New Jersey. He is a fringe crackpot who operates in a galaxy far, far away from bipartisan human decency.”

Ciattarelli Defends His View as ‘Mainstream’

Ciattarelli responded in his radio interviews that “when you look at Goldstein’s comment, once again it confirms that I think we’re winning this race. So I think the questions I’m posing are very reasonable.”

He added: “I think that my mainstream viewpoint on this issue is consistent with an overwhelming number of New Jerseyans, including all of those that have school-aged children. The Dems trying to make this gay versus non-gay is an intentional distraction…Murphy is the one that signed those bills into law. His position is extreme.”

Ciattarelli sought to shift the focus to Murphy, saying that detractors who are calling him “anti-gay” are steering the focus away from the point.

Ciattarelli said that Democrats will say that parents can opt their children out of instruction they find objectionable, but “if you talk to parents, opting out isn’t easy.” Moreover, he questioned the logistics of how opting out would work. If eight children left the classroom because their parents objected to the curriculum, he said, “then we have to explain to kids why the kids are being separated.”

Asked about the curriculum components that discuss the cultural and societal contributions of people from the LGBTQ community, Ciattarelli responded, “If we teach the beauty of diversity and the need for inclusivity, mutual respect, and tolerance—if we teach that each and every day to our children—I think everything else takes care of itself.”

“Let’s not be asking parents to abdicate their responsibility,” he said.