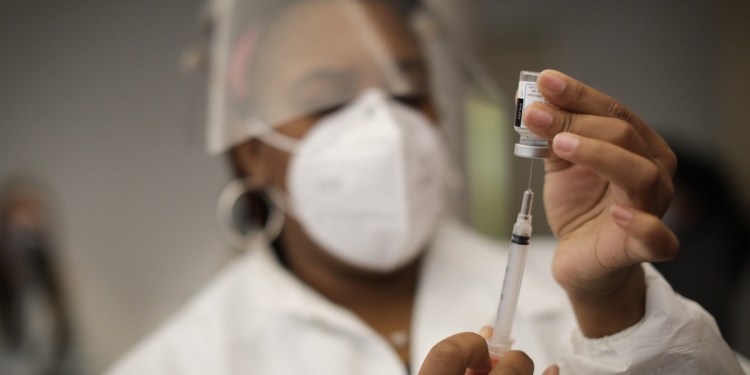 Gov. Phil Murphy signaled his support for hospitals mandating the COVID-19 vaccine but would not say if he would have one for state employees.

“I think in communities like (hospitals and nursing homes), we have to be open-minded to the safety and security of residents, patients,” said Murphy at a press briefing on July 19. “You started seeing this, I think it was in Houston first, then Barnabas came in, and now you’re starting to see just as when Rutgers went with the requirement for higher ed. You’re starting to see a big shift.”

The question arose as two major hospitals in the state recently announced their mandates as terms of employment and a recent ruling by a federal judge allowing a university to require students be vaccinated to return to campus.

RWJBarnabas Health (RWJBH) announced in an email to employees that a half dozen high-ranking workers lost their jobs after they refused to comply with a new policy to get the COVID-19 vaccination.

The medical provider in May announced its policy requiring those employees to be fully vaccinated against COVID-19 no later than June 30. In a notification to employees July 15, the company reported that 2,979 staff members, or 99.7% of the affected employees, were fully vaccinated as of July 14.

“Regrettably, six staff at the supervisor level and above have not complied with the mandate and are no longer employees of RWJBH, per our policy,” the email says. “At RWJBarnabas Health, we have an ethical and professional responsibility to protect our patients and ensure a safe, COVID-19 free environment.”

The company said it will announce its plan mandating vaccination for all staff and physicians “in the coming days.”

A memo to employees at the 13 hospitals and dozens of other health centers run by HMH set a deadline of Oct. 1 to receive at least one dose of vaccine. All staff would have to be completely vaccinated by Nov. 15 or face suspension and/or termination. The directive includes all staff, from cleaning crews to receptionists and all medical staff.

Dr. Daniel Varga, chief physician executive, noted that while 70% of all team members are already vaccinated, he was concerned about the rise of deadly coronavirus variants.

“We are requiring vaccinations for all team members to help stop the spread of this deadly virus and keep our patients, team members and visitors safe,” said Varga. “Mandatory vaccinations are the best way to achieve herd immunity, and protect our communities from the deadly variants that are threatening to wreak havoc in the months ahead. They’re our best shot at defeating this pandemic once and for all, saving lives and returning to normal.”

And the efforts of universities and colleges in New Jersey to mandate students returning to campus this Fall were boosted when a federal judge ruled Indiana University can require its students to submit proof of COVID-19 vaccination.

U.S. District Judge Damon R. Leichty said the university system acted reasonably to protect public health when it required all of its students, faculty and staff to be fully vaccinated against COVID-19 by July 1, with limited medical and religious exceptions.

All of this led Murphy to note vaccine skepticism has been going in a good direction. The biggest difference he believed was those receiving the vaccine months ago are still in good health.

“The bully pulpit is working, including especially—forget about politicians—but from doctors, nurses, faith leaders,” said Murphy. “People are realizing they will be boxed out of certain activities in society where they won’t be able to participate.”

The governor restated his opposition currently to a passport requirement because of the inequities in black and brown communities.

“I think it’s very different when you’re talking about a hospital system versus a broad societal reality,” stated Murphy.

As of July 20, the cumulative number of confirmed coronavirus cases in New Jersey was 898,827 with 593 total new PCR cases reported. There were 234 probable cases, bringing the cumulative total of antigen tests to 131,074. The total number of individual cases for the state is 1,029,901.

As for those that have passed, the state reported 12 confirmed deaths, bringing that total to 23,839. The state listed probable deaths at 2,718, bringing the overall total to 26,557. State officials noted four deaths occurred in the last 24 hours of reporting that has not yet been lab confirmed.

As for the rate of transmission reported July 20, it remained unchanged from the day before at 1.37 The daily rate of infections from those tested July 15 was 2.5%; by region, the rate was 2.3% in the North, 2.7% in the Central region and 2.7% in the South.

Officials reported 350 patients were hospitalized; by region, there were 175 in the North, 96 in the Central and 79 in the South. Of those hospitalized, 58 are in intensive care units and 29 on ventilators. A total of 24 patients were discharged.

Another 729 cases are still under investigation to determine where the person resides.

Health officials noted 20 long-term care facilities are currently reporting at least one case of COVID-19, accounting for a total of 74 of the cases, broken down between 41 residents and 33 staff.

The state’s official death total will now be reported as those that are lab confirmed, sits at 8,063 on July 20. The facilities are reporting to the state 7,878 residents deaths and 144 staff deaths.