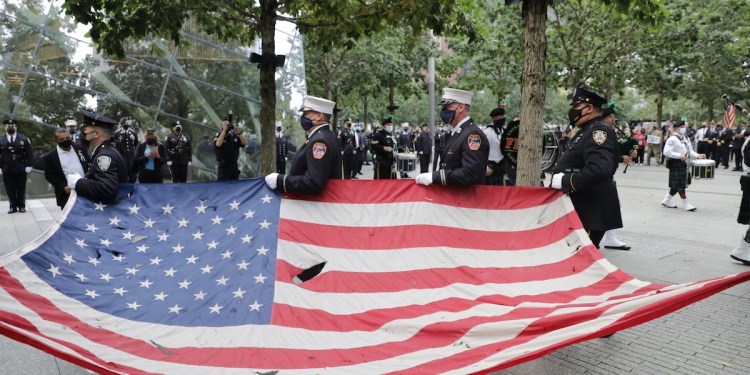 Sen. Bob Menendez was joined by colleagues in renewing a call to better help 9/11 families in their pursuit to find justice for their lost loved ones.

Menendez, along with Connecticut’s Sen. Richard Blumenthal and New York’s Sen. Kirsten Gillibrand, called on the Department of Justice (DOJ) and the Federal Bureau of Investigation (FBI) under the Biden Administration to review previous administrations’ claim of “state secrets privilege” in connection to information requested under the Justice Against Sponsors of Terrorism Act (JASTA).

“The 9/11 families—many of whom we are honored to represent in Congress—have fought relentlessly for justice and to hold accountable all associated with the worst terrorist attack ever committed on American soil,” wrote the senators in a letter to Attorney General Merrick Garland and FBI Director Christopher Wray.

The renewed push was made in advance of the upcoming 20th anniversary of the 9/11 terrorist attacks.

“We are now less than (two) months away from the twentieth anniversary of the 9/11 attacks. The lengthy passage of time since the attacks creates powerful questions about the need for continued classification of documents and the ongoing withholding of related information,” they said.

The Senators questioned why the DOJ, and in particular, the FBI had held back information regarding the attacks, especially considering the request was made under JASTA.

Questioning the Need for State Secrets

The Senators thought they had finally made headway Sept. 11, 2019, when then-President Donald Trump made a promise to disclose information to family members of those lost in the attacks. However, Attorney General William Barr involved the state secrets privilege the very next day.

“Unfortunately, in fact, the reasons for continued concealment of this potentially critical evidence have never been credibly or adequately explained,” they wrote.

Additionally, the three tri-state U.S. Senators said government agencies should not stand in the way of families seeking the truth, and that the FBI should share what it had learned in the last 20 years.

The Senators argued a fair day in court for 9/11 families would require access to evidence, saying the effort was about truth, justice, and accountability.

Menendez said both of the letter’s recipients had previous committed to review the situation, but there was no tangible progress and no response had yet been made.