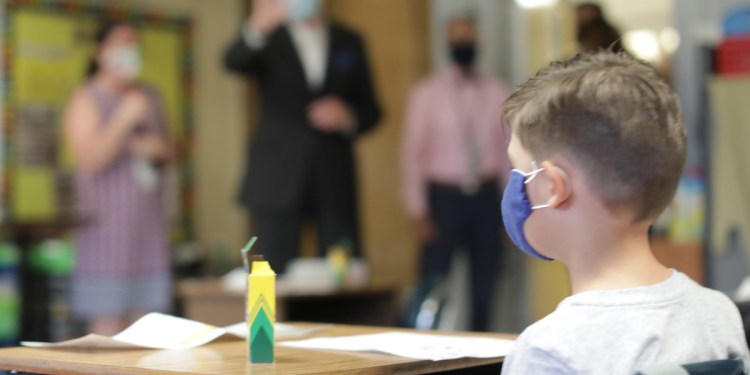 State officials continue to remain confident with their guidance that students will not have to wear a mask in the Fall despite recent recommendations from a pediatrician association that masks be required when doors open in September.

The American Academy of Pediatrics recently called for schools to enforce universal masking mandates because so many kids will not be protected by the Fall and school officials will have no way of verifying COVID vaccine status unless the Centers for Disease Control and Prevention (CDC) approve a vaccine for those 12 and under in the near future.

But, with a relatively high vaccine rate in New Jersey, state officials see no reason right now to mandate masks to be worn by students when classes start for the 2021/2022 school year

“I remain comfortable with where we are,” said Gov. Phil Murphy at a press briefing July 19.

But Murphy added if circumstances change, he would reinstate the mask requirement in New Jersey.

“I want to reiterate unequivocally I don’t want to go back but if we think that’s the right public health thing to do, then that’s what the experts will suggest,” said the Governor. “The good news about masking is it’s not like an investment in a building or building a new building. You can make decisions with the fullness of time and data and make them very informed and also make them very quickly if need be.”

New Jersey Department of Health Commissioner Judith Persichilli pointed out that the doctor’s association is recommending a layered approach to the prevention strategies.

Feel Free to Wear a Mask

Murphy added, “(The CDC) is trying to encompass everybody from Vermont and New Jersey and Connecticut on the one hand all the way over to Missouri, Alabama, other less vaccinated places on the other hand.”

The governor stated if a mask mandate did return, he hoped it would only be for a limited time.

“These variants are not raging like this forever and for always….this is not a permanent condition that we’re in,” stated Murphy. “We need to keep that in mind, that we can’t stigmatize against someone who chooses to (wear a mask), whether they do it for the absolute right, public health reason, because they’re unvaccinated, or because they just feel more comfortable doing it.”

As of July 21, the cumulative number of confirmed coronavirus cases in New Jersey was 899,464 with 655 total new PCR cases reported. There were 208 probable cases, bringing the cumulative total of antigen tests to 131,136. The total number of individual cases for the state is 1,030,600.

As for those that have passed, the state reported five confirmed deaths, bringing that total to 23,844. The state listed probable deaths at 2,718, bringing the overall total to 26,562. State officials noted two deaths occurred in the last 24 hours of reporting that have not yet been lab confirmed.

Officials reported 369 patients were hospitalized; by region, there were 182 in the North, 103 in the Central and 84 in the South. Of those hospitalized, 63 are in intensive care units and 26 on ventilators. A total of 46 patients were discharged.

Another 725 cases are still under investigation to determine where the person resides.

Health officials noted 24 long-term care facilities are currently reporting at least one case of COVID-19, accounting for a total of 85 of the cases, broken down between 49 residents and 36 staff.

The state’s official death total will now be reported as those that are lab confirmed, sits at 8,063 on July 21. The facilities are reporting to the state 7,878 residents deaths and 144 staff deaths.