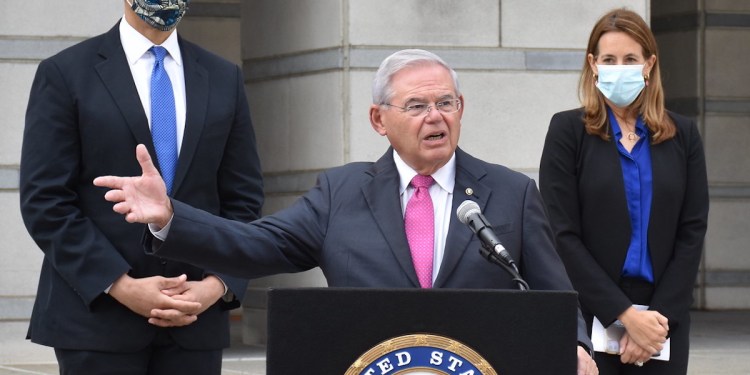 The bipartisan legislation—The Daniel Anderl Judicial Security and Privacy Act of 2021—would place restrictions on the sale or dissemination of personal information of federal judges and their immediate families.

The bill was introduced in the Senate on July 14 by New Jersey Senators Bob Menendez and Cory Booker. On July 16, U.S. Reps Mikie Sherrill (D-NJ) and Brian Fitzpatrick (R-PA) introduced the legislation in the House.

Sherrill: Public Servants Must Be Protected

The bill is named for Salas’ son, who was murdered during a July 2020 violent home invasion. During the incident, a man posing as a FedEx delivery driver, went to Salas’ home in New Brunswick and opened fire, critically wounding her husband, Mark, and killing their 20-year-old son, Daniel.

The gunman, Roy Den Hollander, identified by authorities as a “men’s rights” attorney, had previously argued a case before Salas and used publicly available information to target the judge. A day after the attack, Hollander was found dead from a self-inflicted gunshot wound in upstate New York.

“No judge should have to fear for their safety, or the safety of their families, because of public service to our country,” Sherrill said of the tragedy.

“It’s imperative we make clear that we will protect public servants who are doing their duty and living up to their oaths,” she said.

The measure would boost funding to the U.S. Marshals Service, which provides protection for judges and serves as the enforcement art of the court system. It would allow for hiring additional intelligence analysts, monitoring and assessing online threats, investigating complaints and addressing acts of aggression against the federal judiciary.

‘Security Incidents’ On The Rise

The renewed push to protect judges comes as threats against the judiciary are on the rise.

A newly-released report from the Department of Justice found that “security incidents” against federal judges jumped 89% between 2016 and 2019 but that the U.S. Marshals Service “does not have the resources or proactive threat detection capabilities” needed to meet its protective services obligations.

Fitzpatrick said, “In order to bolster our ability to protect our federal judges and their families, we need to safeguard the personally identifiable information of our judges and optimize our nation’s personal data sharing and privacy practices.”

“We must do our part to keep them and their loved ones safe,” he added.

Menendez said it was imperative to give the U.S. Marshals Service the resource and tools needed to keep judges safe.

“I made a personal commitment to Judge Salas that I would put forth legislation to better protect the men and women who sit on our federal judiciary, to ensure their independence in the face of increased personal threats on judges and help prevent this unthinkable tragedy from ever happening again to anyone else,” he said.

In the wake of the attack on the Anderl-Salas family, Menendez, Booker and Sherrill partnered last year on bicameral legislation designed to protect judges and their families.

The bill stalled in the Senate after Sen. Rand Paul (R-KY) sought to amend it to extend similar protections to members of Congress.

Booker, a member of the Senate Judiciary Committee, said, “No federal judge should ever have to live fearing that their commitment to serving the public could make their family a target.”

“Last year, our state grieved alongside Judge Salas and her husband following the tragic murder of their son Daniel.  Now, it’s time for Congressional action to prevent such a horror from ever happening again.”

Graham said, “The tragic and senseless death of Daniel Anderl is a grim reminder of the problems our federal judiciary and their families face. I will do everything in my power to work with my colleagues to make sure Mr. Anderl did not die in vain.”

In November 2020, Gov. Phil Murphy signed a similar bill into effect in New Jersey that prevents the release of personal information of current or former judges, prosecutors and law enforcement officials.

At the time, Salas thanked Murphy and the State Legislature “for enacting this trailblazing legislation” and said she hoped it could be “a stepping stone to improving the security” of federal judges throughout the country.