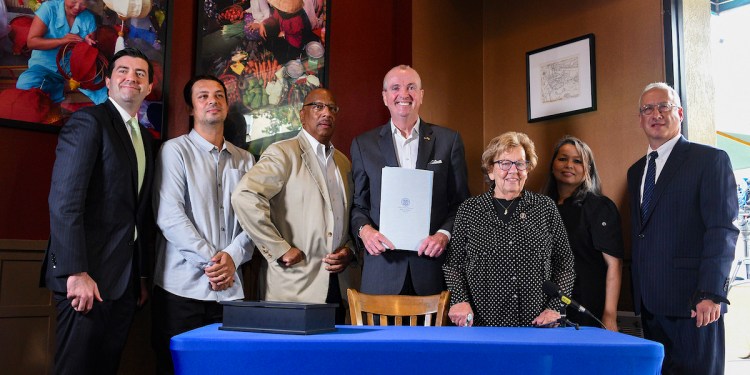 The governor signed legislation on July 22 to offer $135 million to small businesses throughout the state, administered by the New Jersey Economic Development Authority (NJEDA) as part of its Phase IV Emergency Grant Program and NJ Community Stage Relief Grant Program.

Murphy signed the bill into law at the Simply Vietnamese restaurant in Tenafly, with lawmakers including 37th Legislative District members State Sen. Loretta Weinberg and Assemblyman Gordon Johnson on hand. He later visited with small business owners in Passaic.

“As small businesses throughout New Jersey continue to struggle from the economic aftermath of COVID-19, we remain committed to providing them with the resources they need to recover,” said Murphy. “Together with our partners at the federal level, the NJEDA and other departments have provided more than three quarters of a billion dollars to our small business community as we emerge from the pandemic stronger and more resilient.”

The bulk of the funding will be administered by the NJEDA, and will help fund all eligible Phase IV applications. To date, the economic agency has allocated more than $650 million in aid to tens of thousands of small businesses across the state.

The breakdown of the $135 million in today’s legislation is as follows:

“The last year and a half have been economically challenging for many New Jersey families, businesses, and the organizations serving our communities,” said Johnson, a sponsor of the bill. “It’s time to get back on track. The allocation of this federal funding will aid in helping New Jersey do just that.”

The owners of Simply Vietnamese, owned by K.T. Tran, and Ma Mi Eatery, owned by Joseph Diovisalvo, said the aid they have received has allowed them to keep their doors open.

“Business is picking up and that money has really, really helped me,” said Tran. “When you own a business, it is a stressful business.”

“The $135 million in additional COVID-19 relief funding enacted today will be a lifeline to small businesses as they reopen and return to full capacity,” said Sullivan. “The targeted funds for restaurants, arts and culture organizations, and child care providers will be particularly important in ensuring businesses that were severely impacted by the pandemic have the resources they need to make a full recovery.”

As of July 22, the cumulative number of confirmed coronavirus cases in New Jersey was 900,128 with 750 total new PCR cases reported. There were 312 probable cases, bringing the cumulative total of antigen tests to 131,218. The total number of individual cases for the state is 1,031,346.

As for those that have passed, the state reported four confirmed deaths, bringing that total to 23,846. The state listed probable deaths at 2,718, bringing the overall total to 26,564. State officials noted two deaths occurred in the last 24 hours of reporting that have not yet been lab confirmed.

Officials reported 356 patients were hospitalized; by region, there were 182 in the North, 110 in the Central and 64 in the South. Of those hospitalized, 60 are in intensive care units and 30 on ventilators. A total of 58 patients were discharged.

Another 726 cases are still under investigation to determine where the person resides.

Health officials noted 25 long-term care facilities are currently reporting at least one case of COVID-19, accounting for a total of 90 of the cases, broken down between 51 residents and 39 staff.

The state’s official death total will now be reported as those that are lab confirmed, sits at 8,063 on July 21. The facilities are reporting to the state 7,878 residents deaths and 144 staff deaths.