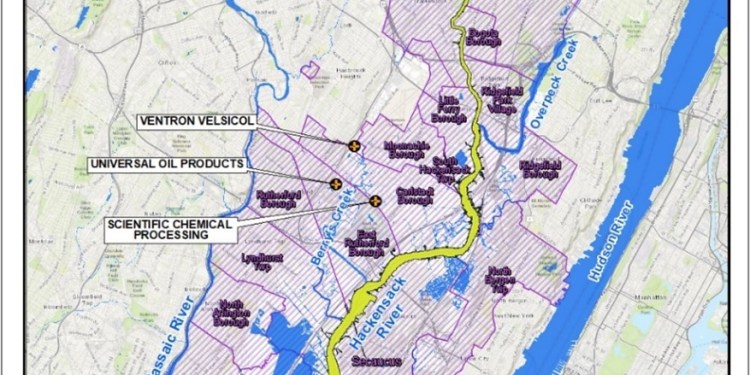 New Jersey officials, including Reps. Josh Gottheimer and Bill Pascrell, announced they are seeking to designate 23 miles of the lower Hackensack River as a federal Superfund site.

If granted, a Superfund site designation would provide access to federal funds to clean up the contaminated river and enable the federal Environmental Protection Agency to begin the process of identifying responsible polluters to fund remediation.

The section of the Hackensack River, located in northeastern New Jersey, runs from Oradell Dam to Newark Bay. State officials said this would be the first time that a New Jersey river, itself, would be proposed for Superfund listing and marks a critical step toward remediation of river sediments contaminated with mercury, polycyclic aromatic hydrocarbons, and other pollutants from past industrial practices.

New Jersey Department of Environmental Protection Commissioner Shawn LaTourette, Gottheimer, and Pascrell held a July 23 press event in Laurel Hill Park along the river in Secaucus to announce the effort to seek Superfund designation.  They were joined by local officials from Bergen and Hudson County towns that line the river.

Gottheimer said at the event that the affected stretch of the Hackensack River snakes past multiple towns in his 5th district, including River Edge, Hackensack, Oradell, Teaneck, and Bogota.

“By including the Lower Hackensack River in the Superfund program, this means that we will be able to bring critical resources to boost this cleanup effort,” Gottheimer said. “With this cooperation between the State of New Jersey and the federal government, we’re working to stop further damage and contamination of North Jersey’s waters and wildlife.”

Pascrell: Past Leaders ‘Dragged Their Feet’

Pascrell thanked LaTourette and Gov. Phil Murphy for their support, saying that earlier leaders “dragged their feet” and “shrugged at the dilemma” while North Jersey communities along the Hackensack River suffered.

“Once these efforts begin, our region will realize the powerful economic, environmental, and recreational benefits the Hackensack River has to offer,” said Pascrell, who represents New Jersey’s 9th district.

“Cleaning up dilapidated and dangerously contaminated sites remains a top priority for my office. We will remain vigilant and not allow any more inaction. While I am fighting to protect our environment in the Congress, I am thankful to see the Murphy Administration leading the way here in New Jersey.”

‘Much Hard Work Ahead’

LaTourette said at the event that the Murphy administration is committed to cleaning up the river, which he said has been contaminated for so long that local health officials banned bathing in it as early as the 1920s.

“This first step—it’s just the beginning. There’s much hard work ahead.”

The state’s environmental commissioner said that New Jersey’s “important and worthwhile industrial legacy also leaves behind environmental impacts that we must still reckon with today. Because of industry of the past and some present the Hackensack River is polluted with contaminants including mercury and PCBs and other toxic and hazardous substances.”

The lower portion of the Hackensack River—23 miles spanning from the Oradell Dam in Bergen County to the mouth of the river at Newark Bay in Hudson County—“need our attention and our help,” LaTourette said. “This area of the Hackensack River was once home to heavy industry. It’s bounded by known contaminated sites and its immediate watershed hosts nine superfund sites impacted by contaminants strikingly similar to those that we find in the main stem of this river.”

The federal Superfund designation was created in the Comprehensive Environmental Response, Compensation and Liability Act (CERCLA) in 1980 during President Jimmy Carter’s administration. Congress passed the law in response to public concern over the risk to human health and the environment posed by toxic waste dumps such as Love Canal in New York.

Under CERCLA, the EPA seeks parties responsible for environmental contamination to perform cleanups or pay the government for EPA-led cleanup work, but the taxpayers foot the bill when responsible parties cannot be identified.

Hackensack Riverkeeper Bill Sheehan said that he’s been working on obtaining a Superfund designation since 2015 and politics got in the way of past efforts. The EPA undertook a study during the Obama administration, but previous New Jersey Gov. Chris Christie’s administration would not let the EPA move forward with listing the river, he said at the press event.

New Jersey’s Department of Environmental Protection noted that the federal EPA previously studied the Lower Hackensack River “and is committing to completing the evaluation for potential inclusion” on the Superfund National Priorities List.

Said Sheehan: “I would like to see it become one of the most important Superfund cleanups ever undertaken by the U.S. EPA and prove to all those naysayers out there that the Hackensack River is good and it’s getting better.”