Ciattarelli looks to make uptick in crime a campaign issue

by Kimberly Redmond
in Court
0 0
1 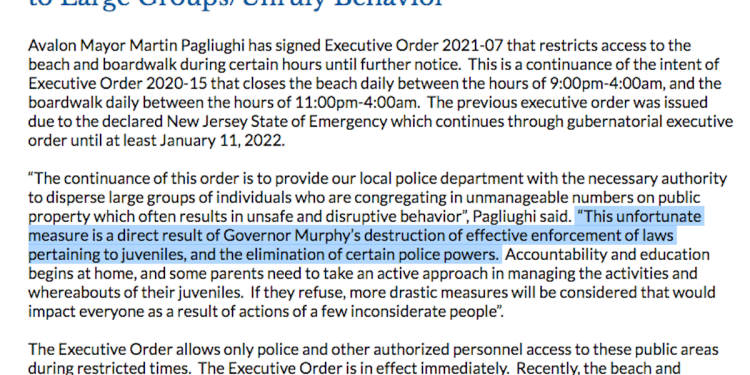 New Jersey Republicans are blaming Gov. Phil Murphy’s policies for the uptick in crime and unruly behavior in Jersey Shore communities this summer.

While the state’s new marijuana laws and juvenile justice reforms are aimed at keeping young people out of the criminal justice system, critics say it is tying the hands of law enforcement and disturbing the peace in shore towns.

Over the past few months, officials in several towns, such as Avalon, Point Pleasant, Beach Haven and Long Branch, have reported large gatherings of teenagers and young people that have destroyed property, harassed residents and started fights. As a result, communities have put in place restricted overnight access to boardwalks and beaches to fight the upsurge in bad behavior.

“This order is to provide our local police department with the necessary authority to disperse large groups of individuals who are congregating in unmanageable numbers on public property which often results in unsafe and disruptive behavior,” Avalon Mayor Martin Pagliughi said in announcing that town’s new policy. “This unfortunate measure is a direct result of Governor Murphy’s destruction of effective enforcement of laws pertaining to juveniles, and the elimination of certain police powers.”

State Sen. Anthony Bucco (R-25) said the slew of stories about teens causing mayhem up and down the Shore this summer demonstrate that Murphy went too far with social justice reforms in the aftermath last summer of George Floyd’s death.

“From Monmouth to Cape May, we’ve seen what happens when you strip police of the power to hold teenagers and young adults accountable for breaking the law,” he said.

“Kids have no fear of smoking pot, drinking, or breaking other laws in public when they know police can do little more than issue toothless warnings. It’s only going to get worse as more kids realize that Governor Murphy has given them a free pass until they turn 21,” Bucco added.

State Sen. Michael Testa (R-1) said the directive “makes police the criminals if they dare to stop, detain, or question rowdy teenagers who are destroying property, openly using drugs and alcohol, and disrupting our communities.”

“All across New Jersey, Governor Murphy has stripped police of their power to enforce the law and protect the public while clear violations are being committed before their eyes. Kids know they’re above the law and they’re taking advantage of it,” Testa stated.

Murphy has defended himself a few times against the growing criticism that he is culpable for the crime surge.

“I think there are a lot of reasons why folks are behaving the way they are coming out of a pandemic when you’ve been locked down, when you’ve been going to school remotely, when you’ve been working remotely,” he said during a July 12 press conference. “The shore is booming. There’s a disconnect between the economy and the labor market; we’ve talked about that a fair amount”

A few weeks earlier, he pointed out that crime increases are “not unique to New Jersey.”

“There’s a lot of behavior right now. I suspect partly…95 degree, high humidity weather does not help. There’s a lot of kinetic activity in the state right now and in the country,” Murphy said. “We’ve seen upticks in gun violence in the state, in the country. We’ve just got to plead with people we get it. Everybody wants to get out there and unshackle themselves from this pandemic.

Jack Ciattarelli, New Jersey’s Republican nominee for governor, has made this an issue in his campaign, connecting Murphy as being responsible for the “lawlessness” along the Jersey Shore, claiming that police have been “disarmed” by the governor and his former attorney general.

“People up and down this state are extremely concerned, longstanding family traditions are fading away, police recruitment is at an all-time low, and the only thing Murphy has to offer is his usual ‘thoughts and prayers’ from another heavily staged press conference,” Ciattarelli stated. “Enough is enough—it’s time for Murphy to go.”

Point Pleasant Beach Mayor Paul Kanitra echoed the sentiment, saying, “There are zero solutions coming out of the governor’s office. Our communities, our residents, and law-abiding visitors deserve someone who will work with us and local law enforcement to find solutions—yet heat and humidity is blamed for the chaos instead of those individuals who actually cause it.”

“It’s Not an Us Against Them”