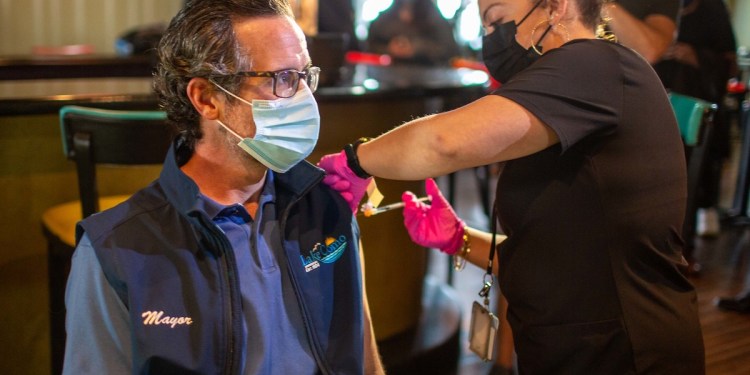 While Gov. Phil Murphy is establishing a vaccine requirement for workers in healthcare facilities and high-risk congregate settings, general concern for emerging coronavirus variants is on the rise.

Forty-eight percent of Americans are at least somewhat concerned about catching one of the emerging coronavirus variants, according to a recent Monmouth University Poll.

The poll found that concern was generally elevated among those who received at least one dose of the vaccine, with 57% reporting their concern; meanwhile, only 16% of those who were vehemently opposed to getting the vaccine had any concern about catching a new variant.

“Many, if not most, anti-vaxxers believe COVID is a hoax or they are unlikely to get infected. Which means there may be very little that can be done at this point to change their minds,” said Patrick Murray, director of the Monmouth University Poll.

About Seven in 10 Have at Least One Shot

The Monmouth University Poll found that 68% of respondents reported getting at least once dose of a COVID-19 vaccine, which was in-line with current CDC reports. Additionally, 2% said they would get it as soon as possible and 9% were hesitant but persuadable.

In contrast, 17% remained opposed to getting the vaccine at all. Among those who do not want to get the vaccine, 70% identified with or leaned toward the Republican party while only 6% aligned with Democrats, showcasing a partisan divide.

Although the number who were opposed to getting the vaccine dropped in the most recent poll, Monmouth University Poll found the number of people who did not answer the question grew from polls recorded in April and June, with the profiles of those who “don’t know” looking extremely similar to anti-vaccination groups.

“This could be a data blip, but it’s possible that more anti-vaxxers refuse to admit their position publicly now that leaders in their own party are pointing the finger at them for the recent surge,” said Murray. “However, it is not clear that calling them out has moved many, if any, of them from their vehement anti-vax stance.”

New Mandate by the Governor

The new rules from the Governor will require all healthcare facilities and other settings to ensure vaccinations among all employees by Sept. 7. For workers that still do not comply, a testing program will be required to ensure those workers do not have the disease.

“We are taking this step today because it has been proven time and time again that vaccines save lives and are our way out of this pandemic,” said Murphy. “Individuals in healthcare facilities should have confidence in their caretakers, and this measure will help ensure peace of mind for those in higher-risk settings.”

The private sector is inching closer and closer to vaccine and mask mandates, according to various media reports. Tyson Foods will require U.S. workers to vaccinate, as will corporate employees at Walmart.

Meanwhile, the Kroger Co. and McDonald’s are reinstituting mask policies even among the vaccinated, reversing course from earlier in 2021 when vaccinated individuals could forgo the face coverings.

As of Aug. 9, the cumulative number of confirmed coronavirus cases in New Jersey was 917,349 with 884 total new PCR cases reported. There were 306 probable cases, bringing the cumulative total of antigen tests to 132,734. The total number of individual cases for the state is 1,050,083.

As for those that have passed, the state reported three confirmed deaths, bringing that total to 23,930. The state listed probable deaths at 2,720, bringing the overall total to 26,636. State officials noted four deaths occurred in the last 24 hours of reporting that have not yet been lab confirmed.

Officials reported 651 patients were hospitalized; by region, there were 273 in the North, 192 in the Central and 186 in the South. Of those hospitalized, 117 are in intensive care units and 59 on ventilators. A total of 82 patients were discharged.

Health officials noted 61 long-term care facilities are currently reporting at least one case of COVID-19, accounting for a total of 239 of the cases, broken down between 131 residents and 108 staff.

The state’s official death total will now be reported as those that are lab confirmed, sits at 8,067 on Aug. 9. The facilities are reporting to the state 7,883 residents deaths and 144 staff deaths.