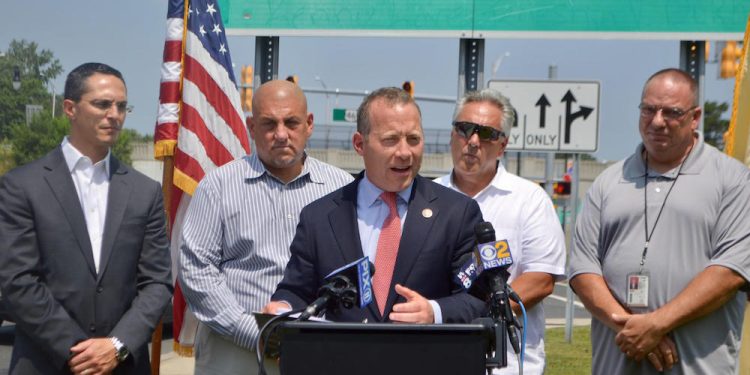 In the shadow of New York City, Rep. Josh Gottheimer rolled out his new bipartisan federal legislation to fight the proposed New York congestion tax in order to protect the North Jersey commuters and families who drive into Manhattan from his district.

Under New York’s proposed plan, after commuters pay $16 to go across the George Washington Bridge, they would have to pay an additional $15 dollars when they drive south of 60th Street.

“The relationship between New York and New Jersey is a driving economic force, not only in the country, but in the world. Our states are deeply intertwined, and it is tradition for New York and New Jersey to work together,” said Gottheimer at a press conference in Lodi Aug. 11. “That is why the proposed $3,000 a year congestion tax is such a slap in the face to New Jersey commuters.”

The congressman’s proposed Anti-Congestion Tax Act will prohibit the U.S. Secretary of Transportation from awarding any new Capital Investment Grants to MTA projects in New York until drivers from the New Jersey crossings into Manhattan receive exemptions from this new congestion tax. Additionally, the bill amends the Internal Revenue Service code to offer drivers a federal tax credit at the end of the year equal to the amount paid in congestion taxes entering Manhattan from any of the three New Jersey crossings.

“Most of these folks are daily commuters into New York City. If you’re in Franklin Lakes, or Newton, or Knowlton, or West Milford, your options are limited—too few regular bus lines, if any, and too many failing trains. People have no other choice but to hop in their car for the commute. Why would we punish them?” asked the congressman.

“With the help of the bipartisan legislation that I’m announcing today, we’re fighting back against the proposed New York congestion taxes that are targeting.”

The proposed federal law comes in conjunction with a state proposal from members of the 38th Legislative District. Their proposal would add the New Jersey state sales tax for out-of-state drivers to every toll crossing from New Jersey into New York. The tax dollars would be collected in a Congestion Tax Relief Fund to help New Jersey commuters contend with New York’s proposed congestion tax plan.

State Sen. Joe Lagana (D-38) is supporting the federal bill to ensure that North Jersey drivers who commute into New York City are not hit with yet another tax.

“We cannot take any option off the table to fight against this unfair proposal,” said Lagana. “New York’s congestion pricing scheme targets the wallets of New Jersey residents who work in the city and already contribute income taxes, tolls and their business.”

No Benefit to New Jersey

Besides the cost to taxpayers, Gottheimer said it “more galling” that unlike the shared Port Authority resources from the tolls on the bridge that help both New York and New Jersey, all of the monies for the Midtown congestion tax will go to New York to help fix their subways.

“That’s a joke,” stated the 5th Congressional District Representative. “Even more, under this proposed clown show, New York City drivers, and those going over or in via intra-state crossings like the Henry Hudson Bridge and Midtown Tunnel, will likely be exempted from the congestion tax.”

“Yes, they are hitting Jersey drivers while protecting New York drivers. What a bunch of hypocrites.”

The lawmaker noted MTA Chief Financial Officer Bob Foran recently said during a June 2021 board meeting that the agency does not need congestion pricing revenue right now. And with Gov. Andrew Cuomo stepping down, Gottheimer is hopeful his successor will put a stop to the congestion tax.

“I’m sending a letter to incoming Governor (Kathy) Hochul that will arrive on her desk on her first day on the job…and reverse this inexplicable attack on Jersey families,” he said. “Proposing a new regressive congestion tax on New Jersey commuters, who already pay a fortune, is no way to make this region stronger. And to do so, just as New York City is trying to get back on its economic feet, makes even less sense.”

The proposal from Gottheimer follows him earlier this year joining Rep. Bill Pascrell, Jr. to request that U.S. Secretary of Transportation Pete Buttigieg require a comprehensive review of the congestion tax’s burden on Jersey commuters, as well as public hearings in Northern New Jersey.

Additionally, Gottheimer is leading bipartisan legislation with Rep. Nicole Malliotakis (R-NY), the Economic Impact of Tolling Act, to ban implementation of a congestion tax until there is more information on the economic impact on our constituents and states.