Ciattarelli running mate claims cases are up due to open borders 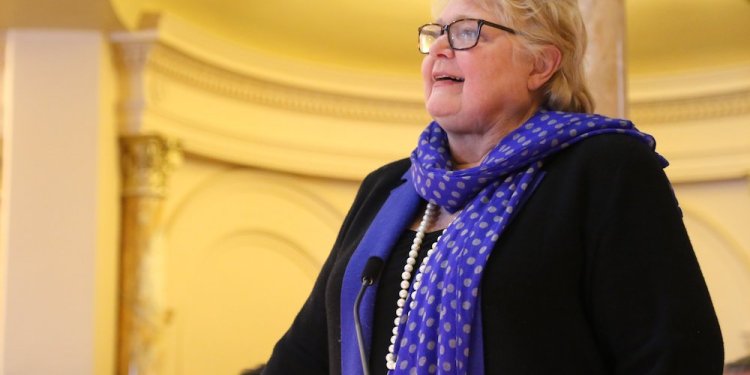 “Tinfoil hat stuff” is what Gov. Phil Murphy labeled the GOP candidate for lieutenant governor’s recent claims the spike of coronavirus cases is due to illegal immigrants gaining access to the U.S. from open borders.

Murphy at his weekly press briefing labeled Diane Allen, the Republican running mate of Jack Ciattarelli, as one of the public figures or elected officials who are contributing to COVID-19 misinformation.

“The people I’m running against started repeating this ridiculous Fox News narrative that the reason why COVID is raging in Texas and other places is because illegal immigrants are coming over the border, encouraged by this President, with COVID and then being put on buses and sent to states,” said Murphy.

The comments from Murphy followed an Aug. 7 radio interview of Allen with David Wildstein on the New Jersey Globe Power Hour on Talk Radio 77 WABC. The comments came when Allen confirmed she voted for former President Donald Trump.

“It’s not because I thought that Donald Trump was a sterling example of humanity. It was because I really was afraid that Biden was going to be tearing this country apart,” said Allen.

“I mean right now, look at all these people with COVID who are coming across the border, and it scares me,” Allen continued. “They’re put on buses, I’d expect some of them are coming up to New Jersey.”

The Ciattarelli’s campaign said Allen statements were based on public health experts and U.S. Department of Homeland Security officials quoted in an NBC News story about how more than 18% of migrant families and 20% of unaccompanied minors who recently crossed the border tested positive for COVID-19. The campaign pointed to another story that some people seeking asylum tested positive after crossing the border in Brownsville, TX, and are headed to New Jersey.

“Racism and xenophobia have no place anywhere in New Jersey, let alone its leadership,” Sen. Menendez tweeted. “If Sen. Allen really cares about protecting New Jerseyans, she’ll stop spreading this garbage and focus on getting every New Jerseyan vaccinated.”

“Senator Allen’s suggestion that undocumented individuals are spreading COVID-19 across our nation is wildly inappropriate and not grounded in reality,” said State Sen. Nellie Pou (D-35), the chair of the caucus, in a statement. “We are at a critical moment in our fight against the pandemic—now is the time to use our platforms to promote facts that will save lives, not shameful demagoguery.”

Looking at the bigger picture, Murphy said Allen’s and like-minded comments are part of disinformation surrounding the coronavirus pandemic that needs to be confronted.

“Let’s call the balls and strikes as we see them. If you hear something that’s crazy like that, be responsible. Don’t repeat that, in addition to calling out the person who said it,” said Murphy.

The governor went on to add “the disinformation (is) making people sick, and in some cases they’re killing people. Other people are irresponsibly repeating stuff that they’re hearing as though it’s true.”

As of Aug. 12, the cumulative number of confirmed coronavirus cases in New Jersey was 921,914 with 1,697 total new PCR cases reported. There were 567 probable cases, bringing the cumulative total of antigen tests to 133,338. The total number of individual cases for the state is 1,055,252.

As for those that have passed, the state reported eight confirmed deaths, bringing that total to 23,952. The state listed probable deaths at 2,720, bringing the overall total to 26,672. State officials noted seven deaths occurred in the last 24 hours of reporting that have not yet been lab confirmed.

Officials reported 763 patients were hospitalized; by region, there were 314 in the North, 242 in the Central and 207 in the South. Of those hospitalized, 134 are in intensive care units and 55 on ventilators. A total of 85 patients were discharged.

Health officials noted 76 long-term care facilities are currently reporting at least one case of COVID-19, accounting for a total of 320 of the cases, broken down between 164 residents and 156 staff.

The state’s official death total will now be reported as those that are lab confirmed, sits at 8,069 on Aug. 12. The facilities are reporting to the state 7,886 residents deaths and 144 staff deaths.