The incidents happened over a six month period 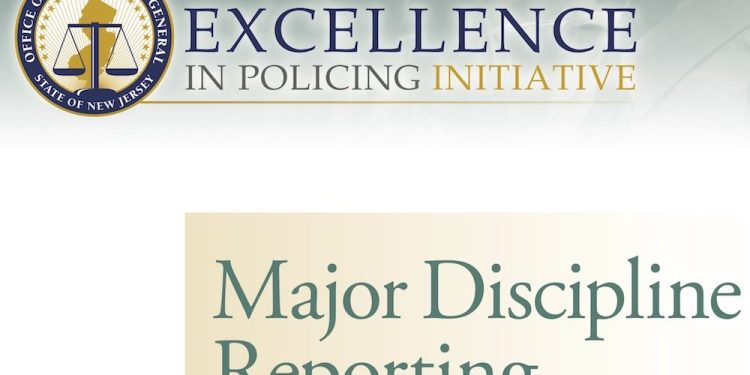 A total of 43 law enforments officers in the North-JerseyNews.com coverage area were subject to major discipline according to information released for the first time by the New Jersey Attorney General’s Office.

Released on Aug. 9 for the time period between June 15, 2020 and Dec. 31, 2020, the information was released in compliance with Attorney General Law Enforcement Directive 2021-6, which former Attorney General Gurbir S. Grewal issued two months ago after the New Jersey Supreme Court ruled for the state authorizing the public release of certain police disciplinary information on a going-forward basis.

“We are releasing this information not to shame or embarrass individual officers, but to provide the same type of transparency and accountability in policing that New Jersey mandates in other essential professions,” stated Bruck.

Under the directive, all New Jersey law enforcement agencies are required to publish online and provide to the Attorney General’s Office the names of any officers who were subject to “major discipline”—those either terminated, demoted, or suspended for more than five days—during the relevant reporting period. Going forward, agencies will be required to release this information on an annual basis, shortly after the end of the calendar year.

Bruck noted 203 officers of the state’s more than 38,000 police represent a fraction of those who protect and serve their communities were reprimanded. Further stating the point, a total of 87 law enforcement agencies reported at least one case of major discipline, out of approximately 500 departments total.

“The vast majority of New Jersey’s law enforcement officers serve the public with honor and integrity, doing the right thing day-in and day-out for the communities they serve, so I take no joy in putting this information out,” said Bruck. “But we are doing this because it is an important and necessary step to build greater public trust while promoting professionalism in law enforcement.”

The report was released after an unanimous ruling in June by the New Jersey Supreme Court that agreed state authorities could publish the names and offenses of officers subjected going forward. An attempt to release records going backwards was denied.

Below is a list of the North Jersey officers who faced major discipline from June 15, 2020- December 31, 2020. The list contains only local police forces as well as sheriffs. No major discipline was reported in Warren County. North-JerseyNews.com excluded corrections and state troopers from the list to concentrate on a more local view.

Officer Steve Boudaher was suspended 75 for violating departmental policies and procedures of his post assignment while on duty.

Police Officer Andrew Vecchione was suspended 82 days for failure to report a motor vehicle accident with his police vehicle to his immediate supervisor.

Police Officer Peter Youngberg was suspended 30 days for his actions stemming from an off duty verbal altercation and some administrative issues that were discovered during the investigation.

Lieutenant Naomi Zepeda was suspended for 20 days for a violation of the rules and regulations, specifically for conducting private business while on duty.

Police Officer Maurice McKelvin was suspended 10 days for failing to take a police action while witnessing an off-duty police officer involved in a physical altercation.

Police Officer Sean Lake was suspended 15 days due to acting unprofessional during a motor vehicle stop when he issued the driver five summonses.

Police Officer Yves Zogba was suspended 10 days for failure to obtain consent of search from a homeowner during a recovery of a weapon used in an assault.

Police Officer James Allen was suspended 10 days for failure to take a police action while witnessing an off-duty police officer involved in a physical altercation.

Police Officer Kerwin Lovo was suspended six days after striking a fire hydrant with a marked patrol unit during an accident.

Police Officer Richard Pacelli was suspended 30 days for discharging a chemical agent against a prisoner inside the emergency room of a hospital.

Police Patrolman Brian Aparicio was suspended 10 days for violation of chain of command/abandonment of post.

Police Sergeant Leonard Ramirez is currently serving a 494 day suspension with pay with the offense not given.

Officer Jose Gonzalez was suspended for 15 days for failing to take police action.

Officer Victor Silva was suspended for 20 days for abuse of the sick leave policy.

Officer Nicole Buzinkai was suspended for 90 days for abuse of the sick leave policy. Investigator Paul Newman was terminated for driving an agency vehicle on more than one occasion, while his driver’s license was suspended.

Officer Jasmine Cruz was suspended for 90 days for divulging the contents of a court proceeding to another party that was not present in the courtroom.

Police Officer Gicella Sanchez lost a total of 109 days and was terminated for violating criminal acts and conduct.

Lieutenant Michael Timmins was suspended for a total of 90 days for negligently discharging a firearm while off duty and on his personal property.

Sergeant Tarance Bryant lost a total of 20 days accrued time for responding to a call for service traveling at a high rate of speed.

Police Officer Andrew Parra lost a total of 20 days for involvement in a domestic violence incident.

Police Officer Maria Decristofaro was suspended for a total of 122 days for conduct, neglect of duty and truthfulness.

Lieutenant Daniel Coyle was suspended a total of 20 days after he was arrested for DWI and other traffic violations.

Police Officer Michael O’Neill was suspended 25 for failure to perform duties and conduct after failing to submit an MVA report as required.

Union City Special Law Enforcement Officer Onofrio Altizio was suspended 60 days after he took a police vehicle without authorization and struck a pedestrian. Altizo was deemed at fault in the accident due to his failure to maintain control of the vehicle.

Lieutenant Sergio DeRojas was suspended eight days for using passcodes not belonging to him to modify a police incident report.

Police Sergeant Dan Papa was suspended 60 days for conduct unbecoming a police officer in regard to an off-duty incident.

Police Sgt Jason Hawiszczak was demoted for failure to supervise, failure to take police action and misuse of the CJIS database.

Lieutenant Claudia Aguirre-Cruz was suspended for 14 days for violating the body worn camera policy, call response policy and for failing to perform duties.

Officer Annette Guzman was suspended for 25 days for failing to report a confidential law enforcement computer lookup after she was made aware that the lookup was improper.

Officer Shayed Islam was terminated: because he could not complete the necessary training academy required for employment.

Officer Kaitlyn Puch was suspended 68 days for conduct unbecoming a public employee, Intoxication off duty, not in uniform, after he was arrested and charged with DWI

Police Ptlm Jack Sanchez was suspended: 20 for untruthfulness on a report.

Police Patrolman William Underwood was terminated for inappropriate and derogatory comments made on Facebook.

Police Cpl. Craig Grauerholz was suspended 45 days for his involvement in an altercation off-duty on the evening of March 17, 2020. As a result, he was charged by the Sussex County Prosecutors Office with one count of PDP Harassment. He pled guilty to a PDP offense on 8.19.2020 and the charge was expunged immediately.