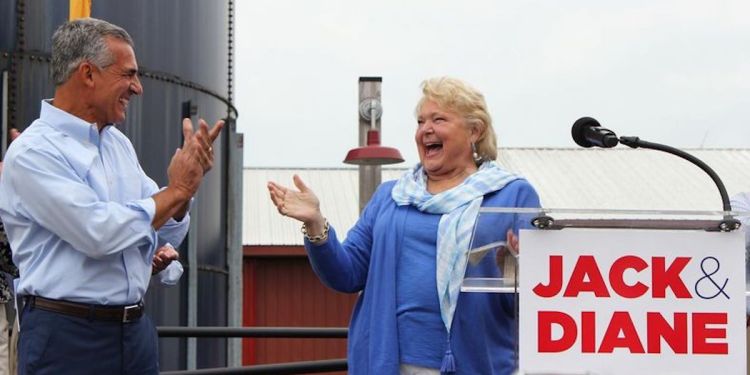 Let us add our voices to those expressing disappointment with the views expressed by Diane Allen in the days after being named the running mate of Republican governor nominee Jack Ciattarelli.

We were encouraged when Ciattarelli chose Allen, a moderate Republican who was known for her bipartisan work. Heck, one of the first bill’s Gov. Phil Murphy signed named after Allen the year after she retired from the senate to strengthen protections against employment discrimination and promote equal pay.

But we were disheartened when Allen went on the radio and gave two answers playing to the worst extremes of the GOP.

Asked on the New Jersey Globe Power Hour if she voted for then-President Donald Trump in 2020, Allen confirmed she voted for her party’s candidate. The former State Senator and Assemblywoman said she did, not because Trump was “a sterling example of humanity,” but because of her concern Joe Biden was going to tear the country apart.

While we disagreed with her choice, Allen’s reasoning for support was a position supported by 70 some million other Americans. And we respect Allen’s decision.

Then came what Gov. Phil Murphy referred to as “tinfoil” comments, using the talking points of Republicans attempting to tie the surge in coronavirus cases in the U.S. to illegal immigration along the Southern border.

“Look at all these people with COVID who are coming across the border, and it scares me,” Allen said. “They’re put on buses. I suspect some of them are coming up to New Jersey—not a good idea. (But) the people who are pulled over from the border who are carrying illegal guns or drugs, or whatever. So there’s a lot of things going on that I didn’t want to see go on, and that was the reason that I voted for Trump.”

Logically, there will be immigrants who have the coronavirus as we are in the midst of a global pandemic with an aggressive variant. But surges seen in the U.S. are more due to the policies enacted—specifically in the South such as the banning of face masks in schools and restricting outreach of vaccination programs—by GOP politicians and the disinformation being spewed about the vaccine than those looking to make a better life for themselves in the U.S.

But more alarmingly, Allen stated her support for making it easier to allow New Jerseyans to carry guns as states that allow them “seem to have less problems.”

“I look down in Texas, where…I believe concealed and maybe even unconcealed weapons are allowed, and these people that go into churches and schools and start shooting, there’s generally someone there with a gun who can take them out,” she said. “I’d like to look at that.”

This is a position that is just completely out of step with the residents of North Jersey. We need less guns on the street. If you are a campaign that wants to attack Gov. Murphy for not fully supporting police and being soft on crime, you are undermining your credibility by advocating for the mythical ‘Good Guy with a Gun.’

We are not naive—we understand candidates of both parties make statements on the trail to rally their bases. But Ciattarelli and Allen have well-earned and admirable reputations for being moderate Republicans when they were in office. We urge them to provide that style of leadership and not pander to GOP extremists.