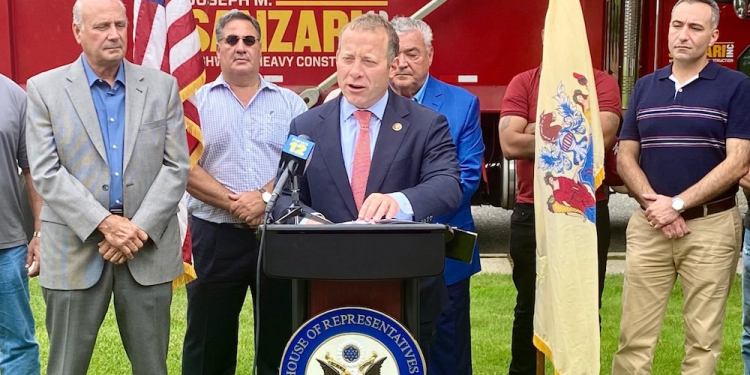 A North Jersey congressman wants a separate vote on the U.S. Senate infrastructure legislation that Democrats plan to couple with a more expansive and expensive budget.

In a letter to Speaker of the House Nancy Pelosi, Rep. Josh Gottheimer and eight other moderate Democrats members of the House want the Infrastructure Investment and Jobs Act voted on first before moving on the $3.5 trillion reconciliation package.

“Some have suggested that we hold off on considering the Senate infrastructure bill for months until the reconciliation process is completed. We disagree,” states the letter that Gottheimer is the lead signatory for on Aug. 13.

“We will not consider voting for a budget resolution until the bipartisan Infrastructure Investment and Jobs Act passes the House and is signed into law,” said the letter signed by Reps. Carolyn Bourdeaux (D-GA), Ed Case (D-HI), Jim Costa (D-CA), Henry Cuellar (D-TX), Vicente Gonzalez (D-TX), Jared Golden (D-ME), Kurt Schrader (D-OR) and Filemon Vela (D-TX). “With the livelihoods of hard working American families at stake, we simply can’t afford months of unnecessary delays and risk squandering this once-in-a-century, bipartisan infrastructure package. It’s time to get shovels in the ground and people to work.”

The members of the House, who as a bloc have the power to halt a vote due to the thin majority Dems have in the lower legislative body, added “the country is clamoring for infrastructure investment and commonsense, bipartisan solutions. This legislation does both, and will help us compete with China and others in the global economy.”

“We urge our House colleagues to follow the same path as the Senate: vote first on the bipartisan Infrastructure Investment and Jobs Act and then consider the budget resolution,” states the letter. “President Biden swiftly applauded its passage, stating that he hopes Congress will send it to his desk as soon as possible. The House of Representatives should heed his call and immediately pass the legislation.”

In response, Pelosi suggested tying the two together in a letter to House Democrats, writing that “I have requested that the Rules Committee explore the possibility of a rule that advances both the budget resolution and the bipartisan infrastructure package.” The House is due to take up the issue when it returns from Summer break on Aug. 23.

While Gottheimer would not disclose his talks with the House leaderships, he reiterated his stance in an interview on CNBC’s Aug. 16.

“It’s very important that we don’t back off of this path which is voting first on infrastructure and then consider the budget resolution. There’s enough of us who really feel strongly that we’re going to hold to our guns here and find a solution,” said Gottheimer.

In an interview on CNN the day the letter was released, Gottheimer defended his position as not putting the larger $3.5 trillion budget in peril as some of his colleagues in the left wing of the party have criticized his actions as paramount to voting against President Joe Biden and his party’s agenda.

“Just the opposite—the President said when it passed the Senate, ‘Get it to my desk as soon as possible’,” stated Gottheimer in a television interview. “That is what we are focused on.”

The 5th Congressional District Congressman said with the support of Democrats and Republicans and such a diverse coalition as the AFL-CIO and the Chamber of Commerce, a vote should move forward without further delay.

“I am actually confused by some of my colleagues that are actually holding this bipartisan package hostage and refusing to let this come to the floor for a vote,” said the third-term congressman. “I do not understand the hesitancy…to vote on this package.”

But the co-chair of the Problem Solvers Caucus noted the infrastructure deal came about in large part through bipartisanship in both the House and Senate.

“We worked with Democrats and Republicans in the House and our colleagues in the Senate, it’s what helped get this infrastructure package going,” said Gottheimer. “Frankly, I am hoping that spirit within the party and between parties will get across the finish line and to the President’s desk.”

“This would be a huge win for the President and a key part of his agenda,” he added.

“We are good colleagues and are always talking to each other. My hope is that we will work it out together” he said about working with progressives. “We can look at the other part as there is no reason to hold that up either.”

Gottheimer received backing on his stance from a key labor organization in his district.

The Bergen County Building Trades praised the leadership from the White House and collaborative bipartisan work between the United States Senate and the House of Representatives, specifically noting the work of the  Problem Solvers Caucus.

“The bipartisan infrastructure deal in the U.S. Senate is a win for New Jersey workers. Congress needs to pass the bipartisan deal without delay and get the bill to the President’s desk,” said Thomas J. Sullivan, President of the Bergen County Building Trades. “Infrastructure investment is a pressing need for New Jersey families and economy. Two million jobs will be created each year over the next decade nationwide and it will help improve New Jersey’s infrastructure.”

New Jersey Teachers Are Expected to Have COVID-19 Vaccine Mandate

New Jersey Teachers Are Expected to Have COVID-19 Vaccine Mandate