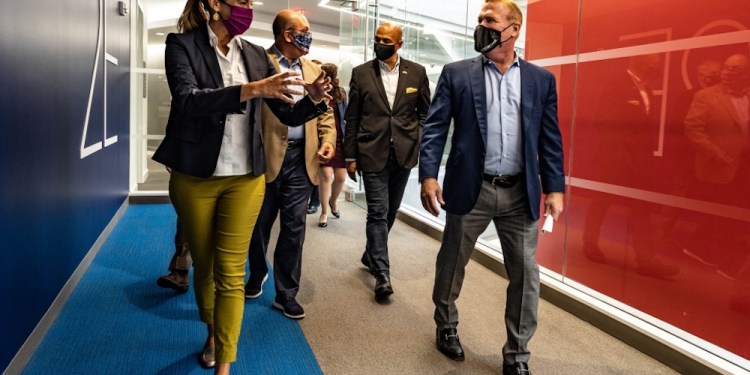 In support of the Revamping Appropriate Incentives for Solar Energy (RAISE) for the Roof Act, Rep. Mikie Sherrill toured the facilities of GAF to highlight their work on solar energy and her recently introduced legislation.

“I was thrilled to be able to highlight the RAISE the Roof Act today, alongside the GAF and GAF Energy teams who are helping New Jersey remain a leader in the clean energy economy,” said Rep. Sherrill at the company’s facility in Parsippany Aug. 18.

“We are thinking beyond traditional manufacturing processes and roofing materials to develop new offerings including integrated solar, recycled asphalt shingles, and non-asphaltic materials,” said Schnepper. “We are excited to have a great champion like Rep. Sherrill who is committed to helping our industry bring that innovation forward to customers.”

The RAISE the Roof Act, which boasts Rep. Bill Pascrell Jr. as a co-sponsor, would clarify and expand the solar investment tax credit (ITC) to include integrated solar roofs.

Under current regulation, only the most traditional and large-scale solar panels qualify for ITC while new innovations, including solar integrated roofing products like those made by GAF, would not qualify.

Additionally, the bill would allow consumers to expense roof repairs and replacement that is sometimes necessary for a solar installation plan.

GAF’s DeBono said the bill is a key step in remedying the issue that for too long rooftop solar policy has ignored the roof.

“The RAISE the Roof Act…(is) the type of smart policy that will unleash innovation in the sector,” said DeBono “Passing RAISE would support thousands of jobs here in New Jersey and across the country, help consumers, and propel us to a cleaner, more sustainable future.”

Sherrill and Pascrell argued the “outdated gap in the tax code” makes it incredibly difficult to accurately price installation costs for solar integrated roofs. Additionally, it made it difficult to delineate what part of a highly integrated job would apply for credit.

“As the threat of climate change grows, we have no choice but to use every tool in our toolbox to combat it and encourage clean energy solutions,” said Rep. Pascrell, New Jersey’s only member of the tax-writing House Ways and Means Committee.

Rep. Sherrill noted the bill would both modernize the current tax law to keep up with investments, but to also confront the climate crisis.

“One of our biggest challenges in confronting the climate crisis is making clean energy technologies more accessible for families and businesses. This bill removes some of the financial barriers and modernizes the current tax credit law to keep up with the tech advancements we’ve seen in solar,” she said.