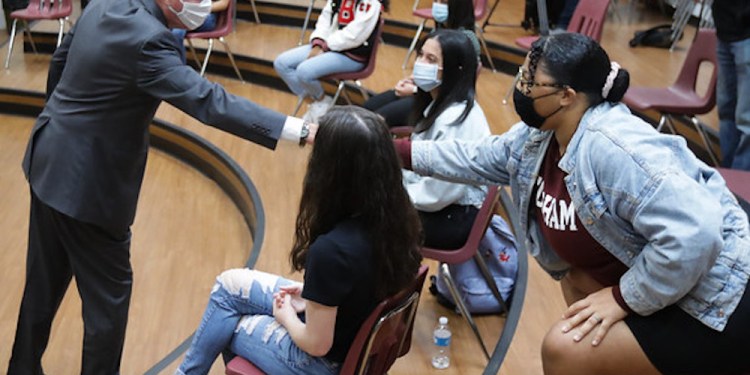 Mandating vaccinations for school-age children was less popular. Just over half of all voters (53%) said they would approve of requiring children aged 12 and older to be vaccinated in order to attend school in person. Under half (45%) said they would support the same requirement for children under 12 years old if a vaccine is authorized for that age group in the months ahead.

Registered voters who are parents were less supportive of vaccine mandates for school attendance with 44% saying they support requiring vaccines for middle to high schoolers and 39% saying they would support such a requirement for younger children.

“The vocal opposition to the state’s school mask mandate is a decidedly minority view. However, there may be greater pushback from parents if a vaccine mandate was instituted for school children,” said Patrick Murray, director of the independent Monmouth University Polling Institute.

The poll was released hours before Gov. Phil Murphy announced the expansion of the COVID-19 vaccine mandate in New Jersey to include all those employed by a school district as well as government employees. At a press briefing on Aug. 23, Murphy revealed that by Oct. 18, teachers, administrators and staffers, whether full or part time, face the choice of being fully mandated or face testing of up to twice a week. The order applies to all public, private, and parochial preschool programs and elementary and secondary schools, including charter and renaissance schools.

The same deadline goes for all state employees—including those at state agencies, authorities, New Jersey State Police officers and public colleges and universities.

Previously, Murphy on Aug. 6 signed Executive Order 251, which mandates masking inside all public, private, and parochial schools from preschool through secondary school, with limited exceptions. The order took effect on Aug. 9.

In signing the order, Murphy said that students learn best in a classroom setting and that he remained “committed to having our schools open for full-time, in-person instruction this fall.”

“While this announcement gives us no pleasure, I know that by taking this precaution we can keep our schools open while also keeping our children safe,” Murphy said. He added that state officials “will continue to closely monitor the science and data and will lift this mandate when we can do so safely.”

Better Than Other States

The poll found that 51% of voters say New Jersey has been doing better than other states in handling the pandemic, while 17% say it has done worse.

“The delta variant has raised public concern, but New Jerseyans look at what is happening in places like Florida and Texas and feel we have things under better control here,” Monmouth University’s Murray said.

The Monmouth University Polling Institute in West Long Branch conducted the poll by phone from Aug 11 to Aug. 16 with 810 New Jersey registered voters and a margin of error of +/-3.5 percentage points.

As of Aug. 24, the cumulative number of confirmed coronavirus cases in New Jersey was 940,179 with 1,595 total new PCR cases reported. There were 548 probable cases, bringing the cumulative total of antigen tests to 137,608. The total number of individual cases for the state is 1,075,930.

As for those that have passed, the state reported 20 confirmed deaths, bringing that total to 24,053. The state listed probable deaths at 2,722, bringing the overall total to 26,775. State officials noted 11 deaths occurred in the last 24 hours of reporting that have not yet been lab confirmed.

Officials reported 982 patients were hospitalized; by region, there were 358 in the North, 293 in the Central and 331 in the South. Of those hospitalized, 184 are in intensive care units and 87 on ventilators. A total of 81 patients were discharged.

Health officials noted 113 long-term care facilities are currently reporting at least one case of COVID-19, accounting for a total of 646 of the cases, broken down between 338 residents and 308 staff.

The state’s official death total will now be reported as those that are lab confirmed, sits at 8,451 on Aug. 24. The facilities are reporting to the state 7,894 residents deaths and 144 staff deaths.