House will vote on infrastructure bill by Sept. 27 as works begins on $3.5 trillion budget 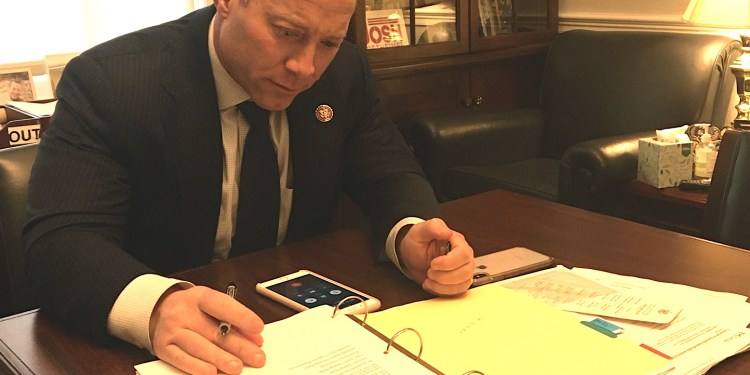 In the end, Rep. Josh Gottheimer was able to achieve his goal in getting a firm date when the Infrastructure Investment and Jobs Act would be voted upon—albeit not as soon as he wanted.

The House of Representatives passed a measure Aug. 24 approving a $3.5 trillion budget blueprint and locking in a late September vote on a roughly $1 trillion infrastructure bill, ending a standoff between centrist Democrats led by Gottheimer and party leaders over their legislative agenda. Although the centrists didn’t secure an immediate vote on the infrastructure measure, they did pin down a Sept. 27 deadline for it, which means the House could vote on that bill weeks before the budget package is ready.

Speaker of the House Nancy Pelosi previously stated the House wouldn’t vote on infrastructure until the budget has passed the Senate, expected to be done through reconciliation. The centrist coalition, with the ability to defeat the legislation due to the Democrats slim majority, had argued passing the bill was urgently need to move forward on President Joe Biden’s agenda, warning that “time kills bills.”

“With roads and bridges crumbling across New Jersey and our nation, this agreement does what we set out to do: secure a standalone vote for the bipartisan infrastructure bill, send it to the President’s desk, and then separately consider the reconciliation package,” said Gottheimer in a statement after the agreement was reached. “This is a big win for Jersey that will help get people to work and shovels in the ground.”

Gottheimer, who had come under criticism from members of his own party that were concerned his stance would block Democrats budget priorities that emphasises investments in healthcare, climate change and education, stressed that a firm date was needed to vote on the infrastructure bill in fear that bipartisan support would wane.

“We have established a path forward that ensures we can pass this once-in-a-century infrastructure investment…allowing us to create millions of jobs and bring our nation into the 21st century,” stated Gottheimer. “The country has waited far too long for legislation that will actually fix our crumbling roads, bridges, and tunnels, including the Gateway Tunnel, and this deal ensures the House will pass the bipartisan package by Sept. 27.”

With naming them, Rep. Bill Pascrell, Jr. chided the Democrats who had sought an immediate vote on the infrastructure bill.

“The delaying and grandstanding we saw this week was not helpful or productive,” said Pascrell in a press statement. “Ensuring we can advance the full measure of support for American families must take precedence. Congress can walk and chew gum at the same time and pass a package deal. An agenda to build back better for all Americans depends on it.”

The representative from the 9th Congressional District stated the Democrats are now focused on assembling the multi-trillion jobs and families package that is central to President Biden’s agenda to rebuild America.

“The American people elected President Biden and a Democratic House and Senate to commence the hard task of rebuilding America. With today’s passage, we took a huge step toward passing the agenda Americans elected us to pursue,” said Rep. Pascrell.

Pascrell said the Ways and Means committee which he sits on and other committees will now immediately “roll up our sleeves” to enact the Biden Administration priorities that emphasizes rebuilding America by making sure the wealthy and big corporations pay their fair share while getting rid of the cap on the state and local tax (SALT) deduction.

“I will redouble my own fight to repeal the sinister SALT cap Republicans cruelly imposed on blue states like New Jersey,” said Pascrell. “I am hopeful that what we ultimately produce will tackle the climate crisis head on be among the most seminal legislation Congress has passed on behalf of unions and working Americans in generations.”

Rep. Tom Malinowski sees an opportunity in reconciliation process to remedy some of its shortcomings in the infrastructure bill that “does give us much of what our country desperately needs…The enactment of both bills will make this Congress the most productive in decades, and help restore faith in the capacity of government to make people’s lives better.”

“My objective for many months has been to pass an infrastructure bill that will rebuild America, create jobs and bring money back to New Jersey for projects like the Gateway Tunnel, and to advance a budget that supports the needs of the middle class families I represent,” stated Malinowski. “I am very happy that we’ve now committed to send the bipartisan infrastructure bill to the president by the end of September, which ensures that funding for the Gateway project will be there when it receives its final approval.”

The congressman stated that while the needs of parents in regards to roads, bridges, and mass transit to get to work, the budget reconciliation bill must address issues such as affordable childcare needed to get the economy growing. Other priorities he will seek to include during the reconciliation bill include tax fairness, climate change, aid for college students and global distribution of the COVID-19 vaccine.

“Any budget reconciliation bill that affects individual tax rates must restore the SALT deduction for my hard working middle class constituents,” said Malinowski. “The investments President Biden is proposing should be responsibly paid for by ensuring that corporations like Amazon actually pay taxes in America, and strengthening enforcement of existing tax laws. But we must also provide real relief to middle class taxpayers and finally restore tax fairness for states like New Jersey.”

The 7th District Congressional representative highlighted that the Build Back Better addressed the climate crisis head-on through market-based incentives that will reduce carbon emissions and transition America to a clean energy future.

“The storms, floods, and fires that Americans have experienced in just the last few months are a wakeup call, but also a reminder that America can prosper if our companies, innovators, and consumers win the race to develop the technologies that lead the world to clean energy,” he said. “This legislation is our best opportunity in a generation to do so.”

Malinowski tied the economic future of the country currently requires access to high quality pre-school and a chance for every high school graduate to go to community college without incurring large amounts of debt.

“The legislation we are developing must advance these goals. Congress must also ensure that when the student loan repayment moratorium expires, borrowers aren’t faced with the burdens they faced before the COVID-19 pandemic,” he said.

A former member of the Obama Administration’s State Department, the congressman urged it set side monies to ensure it is a global leader in providing the COVID-19 to other nations.

“The reconciliation package must include additional funding for the production and global distribution of COVID-19 vaccine,” Malinowski stated. “This is the most important investment we can make to defeat COVID and prevent the emergence of even more deadly variants of the disease.”