Attack on Kabul Airport Was Feared by North Jersey Lawmakers

Rep. Sherrill warned earlier the “evacuation is set to get more dangerous in the coming days” 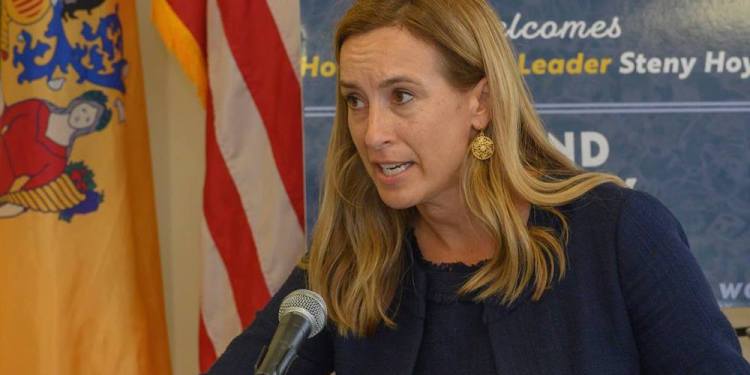 Days before the airport where American troops are leading efforts to withdraw U.S. citizens and their allies were attacked, two North Jersey lawmakers expressed their concerns on the ongoing mission.

Rep. Mikie Sherrill stated the withdrawal date of Aug. 31 was not doable, while Sen. Bob Menendez warned that confronting terrorism would be an issue going forward with the Taliban ruling Afghanistan.

Two explosions struck within a crowd outside the Hamid Karzai International Airport in Kabul on Aug. 26, leaving dozens injured or dead, including 12 U.S. Soldiers and wounded 15. Taliban officials condemned the attack that killed upto 60 and wounded 140. There was no immediate claim of responsibility for the blasts. But the night before, a senior U.S. official warned of a “specific” and “credible” threat at the airport by an affiliate of the Islamic State, the Islamic State Khorasan, or ISIS-K.

An attack was something that Sherrill had fornwarned, stating on Aug. 24 that “Make no mistake, this evacuation is an extremely dangerous mission and is set to get more dangerous in the coming days.”

“I condemn in the strongest and most forceful of terms today’s attacks targeting U.S. citizens, personnel, and vulnerable Afghans trying to flee Afghanistan,” said Menendez. “This is a full-fledged humanitarian crisis, and the U.S. government personnel, already working under extreme circumstances, must secure the airport and complete the massive evacuation of Americans citizens and vulnerable Afghans desperately trying to leave the country.”

A couple of days before the attack, Sherrill said the “critical mission” was assuring  all American citizens and Afghan allies in the Special Immigrant Visas (SIV) program and their families to safety, especially vulnerable Afghans like women and girls who served in leadership roles.

“America supported their efforts to access education and leadership roles throughout Afghanistan and they are now in danger as a result of taking on those roles,” said the Congresswoman. “Our focus needs to be on executing this mission.”

A Navy veteran, Sherril told Biden Administration officials that the goal of finishing the withdrawal by the end of the month, despite the progress that had been made, was suspect.

“I do not believe (a withdrawal of all our allies) can be accomplished by Aug. 31, and I have requested that the Secretary of Defense and the Secretary of State encourage the President in the strongest terms possible to reconsider that deadline,” said Sherrill. “That said, I think it is critically important we ensure our military has the tools it needs to complete the mission.”

Menendez, Chairman of the Senate Foreign Relations Committee, released a set of seven goals aimed at addressing the critical issues being encountered in Afghanistan with his counterparts in Italy, France, Germany, Japan, the United Kingdom, and the European Parliament.

“We believe we have a role in working together to mitigate the serious consequences for global security and regional stability the current emergency could trigger,” said Menendez.

The G7 members laid out their plans that need to be done in three phases with the first being the Humanitarian Rescue currently underway.

The the next two phases are political in nature: establishing a framework for dealing with the Taliban and assuring global security and regional stability.

The leaders of the G7 are mandating that the not be recognize the Taliban until they repudiated all cross-border terrorism, including al Qaeda and associated groups; equality of rights for girls and women; protection of minority ethnic and religious groups; commitment to democratic elections; and ending all narcotics-related activity.

“There is little indication from its past or present behavior that the Taliban is committed to any of these principles so the G7 countries should be prepared to isolate the Taliban and impose robust sanctions should violations reach an agreed threshold,” the statement from the G7 noted.

Menendez said the U.S. and its allies reiterated that the withdrawal from Afghanistan “should not be misinterpreted by the global community as any weakening of resolve from G7 governments in taking all necessary measures to combat cross-border terrorism, to support regional cooperation or advance democratic values.”

The group is looking to form allegiances with other countries when it comes to combating terrorism in the region.

“With the spillover of terrorism possible, we would like to see India invited to attend this G7 meeting,” the groups statement said. “As other terror groups are beginning to muster in the Horn of Africa and reawaken movements elsewhere, we believe the African Union should be invited to attend individual G7 meetings when appropriate.”

The Menendez statement concluded, “We hope the G7 governments are able to agree a concrete set of outcomes from the emergency meeting of leaders and look forward to cooperating on the Parliamentary steps required to protect the people of Afghanistan and all our citizens.”