by Kimberly Redmond
in County
0 0
1 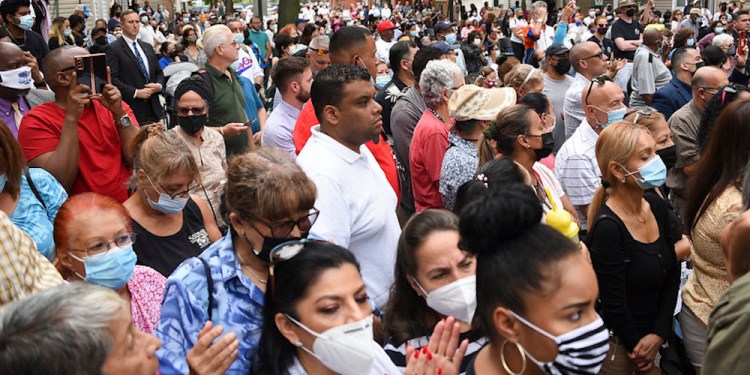 New Jersey voters believe the two biggest issues facing the state are the ongoing coronavirus pandemic and taxes, according to a new survey from the Monmouth University Polling Institute.

Who’s Up For The Challenge?

Pollsters asked voters which gubernatorial candidate they think will do a better job at handling some of New Jersey’s most pressing challenges. When it comes to handling the pandemic, Democratic Gov. Phil Murphy led Republican Party nominee Jack Ciattarelli by a more than 2-1 margin, 46% to 21%.

Murphy leads on jobs and the economy was closer but still distinct, garnering 35% support over Ciattarelli’s 21%, according to the poll. Nearly one-in-four (22%) said they trust the two the same.

But when it came to who voters trusted more to deal with New Jersey’s property taxes, the electorate was evenly divided—30% favored Ciattarelli and 29% Murphy.

Patrick Murray, director of the Monmouth University Polling Institute, said, “On the issues part of the campaign, you either win on the thing voters care about the most or you get them to focus on a different concern where you have the edge.”

Just over half (52%) of registered voters in the Monmouth poll back Murphy, while 36% support Ciattarelli. Regionally, Murphy leads in North and Central Jersey, but the Southern part of the state is tilted slightly toward Ciattarelli.

In terms of overall impressions of the two major party nominees, 48% of voters have a favorable opinion of Murphy, who is seeking his second term as governor. According to the poll, 32% said Murphy’s political views are in line with most New Jerseyans, but 46% said they are unsure if he is in step.

While he has ground to make up, Ciattarelli has an advantage that he is a blank slate to most. Sixty-one percent said they have no opinion about Ciattarelli, a  former assemblyman from the 16th Legislative District. Additionally, 73% of respondents said they do not know enough about Ciattarelli to form an opinion on his political views.

The two party’s nominees for lieutenant governor are even less familiar to voters as 80% of respondents have never heard of Diane Allen, the GOP candidate, former state senator and one-time news anchor, while 66% do not know Sheila Oliver, the current Democratic lieutenant governor.

Murray noted that is not unusual because a large chunk of New Jersey’s electorate usually “does not tune in until mid-October,” which means Ciattarelli still has to be introduced to most voters.

“The question is whether the candidate or his opponent gets to make the introduction. A good bet is the Murphy team will pour resources into ads casting the largely unknown challenger as too extreme for the state,” he forecasted.

As of Aug. 27, the cumulative number of confirmed coronavirus cases in New Jersey was 945,717 with 1,990 total new PCR cases reported. There were 570 probable cases, bringing the cumulative total of antigen tests to 138,829. The total number of individual cases for the state is 1,084,546.

As for those that have passed, the state reported 18 confirmed deaths, bringing that total to 24,104. The state listed probable deaths at 2,722, bringing the overall total to 26,826. State officials noted seven deaths occurred in the last 24 hours of reporting that have not yet been lab confirmed.

The state reported 1,022 patients were hospitalized; by region, there were 384 in the North, 307 in the Central and 331 in the South. Of those hospitalized, 202 are in intensive care units and 98 on ventilators. A total of 136 patients were discharged.

Health officials noted 129 long-term care facilities are currently reporting at least one case of COVID-19, accounting for a total of 763 of the cases, broken down between 403 residents and 360 staff.

The state’s official death total will now be reported as those that are lab confirmed, sits at 8,459 on Aug. 27. The facilities are reporting to the state 7,899 residents deaths and 144 staff deaths.