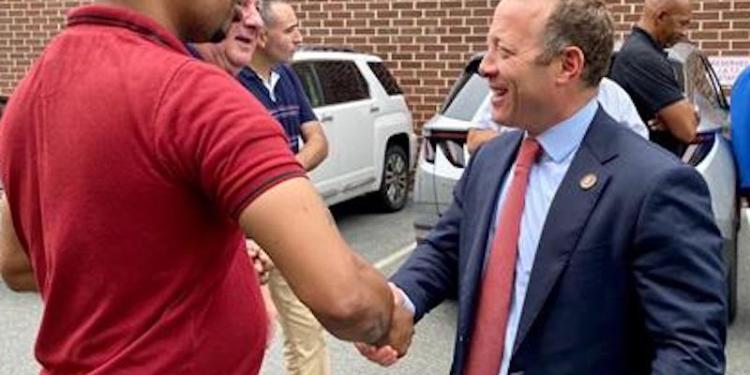 Rep. Josh Gottheimer has been a pinata for politicians and political columnists, both locally and nationally, that last couple of weeks since putting in writing his demand that the infrastructure bill should have been voted upon immediately instead of tethered to the reconciliation budget legislation.

Gottheimer’s expressed fear was that one of the most popular agenda items for the Biden Administration could be lost to the politics of Washington after passing the U.S. Senate by an overwhelming bipartisan vote of 69-30. “Time kills bills. We have this opportunity within our grasp—why would we blow it?” was the mantra of the 5th Congressional District congressman the past two weeks. “We need to get the infrastructure bill to the President’s desk. Now, not later.”

Until a compromise was secured with Speaker of the House Nancy Pelosi that a vote for the $1 trillion infrastructure bill would be held by Sept. 27, the North Jersey Democrat was the one taking all the slings and arrows accusing him of derailing the Biden legislative agenda. People wanted more of an explanation of his stance—there had to be a deeper reason for him and the eight other centrist members of the party threatening to vote against the President’s tentpole legislative achievement ?

We think it is this: it was a preemptive strike against the left wing of the party using the infrastructure package as a bargaining chip to pass the $3.5 trillion reconciliation budget bill.

After all, it is what the more liberal members of the party have stated they plan to do—the same tactic Gottheimer was being chided for. Rep. Pramila Jayapal (D-WA), chair of the Congressional Progressive Caucus, was adamant on Aug. 24 the caucus position remained unchanged: The left wing of the party is more committed to passing reconciliation than infrastructure.

“We will work to first pass the Build Back Better reconciliation bill so we can deliver these once-in-a-generation, popular, and urgently needed investments to poor and working families, and then pass the infrastructure bill to invest in our roads, bridges, and waterways,” stated Jayapal in a press statement released by the left-driven caucus. “As our members have made clear for three months, the two are integrally tied together, and we will only vote for the infrastructure bill after passing the reconciliation bill.”

Plane as day: We will only vote for the infrastructure bill after passing the reconciliation bill.

Gottheimer and Jaypal are two colleagues who lead influential caucuses—the Problem Solvers Caucus and Congressional Progressive Caucus, respectively. And while in a Venn diagram their agenda circles meet in a larger area than you would expect, they definitely enter the Dems mythical big tent from opposite directions.

As for the reconciliation budget, the foremost example of disagreement for North Jerseyans is the debate on the removal of the state and local tax (SALT) deduction cap. It’s an issue lawmakers are prioritizing as being vital to help the middle class in the Garden State. But left wing Dems led by Rep. Alexandria Ocasio-Cortez (D-NY) counter that the deduction aids higher-income taxpayers, and shouldn’t be a priority given greater need to enhance federal support for lower-income families in the social-spending focused bill. Ocasio-Cortez has gone as far as to describe getting rid of the cap as “a gift to billionaires.”

Gottheimer has driven home the point that in his district, the pain has been felt across the board and not just among the wealthiest. According to the Congressman, middle class families in the 5th Congressional District that consist of Sussex, Warren, Bergen and Passaic counties are now paying anywhere from $2,500 to $14,000 more in taxes because of the GOP’s actions in 2017.

Now, we understand it makes political sense for the majority of Democrats to want to pair a budget bill that will struggle to get enough votes to get passed by its own party with a more popular bipartisan one. When you go big for what you see as a chance to reset the nation’s priorities on such urgent matters such as childcare, climate change and tax fairness, you have to find a path that gives you the best chance of winning in a diverse coalition that makes up the House majority and a 50-50 split in the Senate.

The fight about when to hold the vote about the Infrastructure Investment and Jobs Act was a preview to where Democrats are headed over the next couple of months when it comes to the reconciliation budget. We look forward to the media scrutinizing the motives of the left wing of the party with the same vigor that the nine centrist in the House faced the last two weeks.