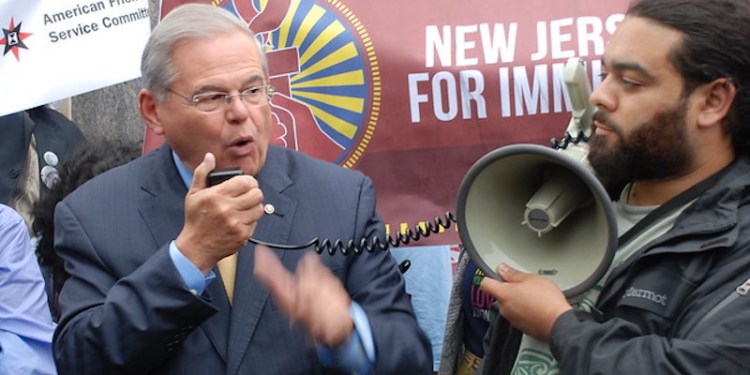 Sen. Bob Menendez hit back at the Supreme Court of the U.S. (SCOTUS) after it directed the Biden Administration to reinstate the “Remain in Mexico” policy instituted under the Trump Administration.

Calling it a “disastrous step” for the country, Menendez argued it was contrary to the nation’s long standing status as a nation made up of immigrants, and a safe harbor for those fleeing violence and crises.

“The Trump administration’s immoral use of the ‘Remain in Mexico’ policy is a stain on our standing humanitarian leadership around the world,” he said.

Striking Back at a ‘Xenophonic’ Law

The highest ranking Latino in Congress, Menendez called the program “xenophobic,” arguing it would force vulnerable people to wait in tent camps set up in dangerous Mexican border communities.

Pregnant women and victims of violence, he argued, would be among those forced to stay in these camps “where the Government of Mexico could not guarantee their safety and security.”

“I urge the Biden-Harris administration to take swift action in using its executive power to curtail and put a lawful end to the implementation of this disgraceful policy,” Menendez concluded.

Menendez argued the SCOTUS decision would hurt the nation’s diplomatic efforts, especially as it encouraged other countries to open their doors to refugees from Afghanistan.

With the terror attacks in Afghanistan at Kabul airport, these efforts will become more critical.

“This is a full-fledged humanitarian crisis, and the U.S. government personnel, already working under extreme circumstances, must secure the airport and complete the massive evacuation of Americans citizens and vulnerable Afghans desperately trying to leave the country,” said Menendez of the attack.

A federal judge in Texas had previously ordered the program to be instituted a week before the decision, and alongside the 5th U.S. Circuit Court of Appeals, refused the Biden Administration’s request to put the ruling on hold.

Of note, the AP reported there was nothing preventing the Biden Administration from trying to find another pathway to ending the program.