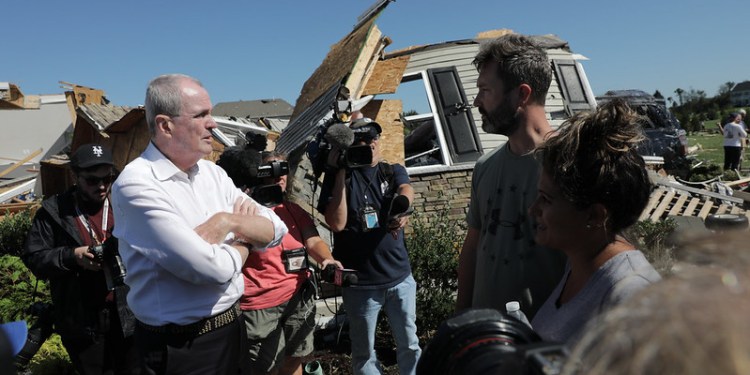 The death toll from the deadly remnants of Tropical Storm Ida that ravaged New Jersey reached 25 people Friday morning, according to state officials. Among the dead were four residents of the Oakwood Plaza Apartments In Elizabeth, two people found dead in submerged vehicles in Hillsborough Township, a driver was found dead in a pickup truck in a creek in Milford, a 70-year-old man drowned in a car fully submerged in rising flood waters in Passaic, a Maplewood attempting to remove debris from drains was suddenly swept up into dangerous flood waters and a man died when he was swept into a 36-inch storm sewer pipe in Middlesex County. The Record

The National Weather Service confirmed three tornadoes were confirmed in New Jersey, including that massive EF-3 in Mullica Hill, with winds as high as 150 miles per hour. NWS investigators have mapped the path of that twister from Harrisonville to Deptford that damaged or destroyed a dozen homes and a barn and two 80 foot tall grain silos at New Jersey’s largest dairy farm. A second EF-1 tornado hit Edgewater Park in Burlington County, following a path to Bristol, PA, while a third EF-0 was confirmed in Princeton that was only on the ground briefly with peak winds of 75 miles per hour. NJ1015.com

President Joe Biden approved an emergency declaration for New Jersey to help cover the costs of cleaning up from Ida. The declaration makes state and local governments eligible for federal assistance in all 21 counties in the state. The funding would be coordinated through the Federal Emergency Management Agency. NJ.com

Gov. Phil Murphy said New Jersey needs infrastructure capable of handling a more violent climate, as he warned of a “long road“ ahead to clean up damage throughout the state caused by the remnants of Hurricane Ida. Murphy said the state needs to update its playbook for storm responses as “The world is changing. These storms are coming in more frequently. They’re coming in with more intensity. As it relates to our infrastructure, our resiliency, our whole mindset, the playbook that we use—we have got to leap forward and get out ahead of this.” PoliticoNJ

Hurricane Ida and Western wildfires are putting pressure on lawmakers to approve funds for infrastructure resiliency projects. While business groups and Republican senators who supported the bipartisan infrastructure deal, which includes $50 billion for resiliency projects and another $65 billion to harden the electrical grid, push for its swift passage, dozens of House Democrats are pressing leadership to include more resiliency programs in the separate Democrats-only budget reconciliation package. The Wall Street Journal

New Jersey is expected to see a stretch of sunny skies without precipitation, but river flooding from Ida will remain a concern over the next few days. The National Weather Service has issued flood warnings for a majority of the state through Sept. 4 as the Passaic, Pequannock, Raritan and Rahway rivers are all in danger of producing flooding conditions. News12 New Jersey

When it comes to implementing K-12 COVID-19 screening and testing programs for students, school districts will have the discretion to implement a program that must have parental consent. “Testing should be offered on a voluntary basis, and schools should have a procedure in place to obtain parental consent for minor students,” said New Jersey Department of Health Commissioner Judith Persichilli. “School-based testing should never be conducted without consent from a parent or a legal guardian.” North-JerseyNews.com

The Liberty Science Center announced that it will require visitors to show proof of vaccination for COVID-19 to enter the center beginning Sept. 8. Visitors 12 and older must show proof of at least one dose of the COVID-19 vaccine and a valid photo identification. The center will continue to require guests and staff to wear face masks. Hudson Reporter

Gov. Phil Murphy recently signed the Laura Wooten’s Law, which will require civics instruction at the middle school level starting in the 2022-2023 school year. New Jersey, among a minority of states that didn’t require the topic to be studied by middle school students, will require students 6-12 to be acquainted with the underlying principles of the American system of government and citizens’ roles in it. North-JerseyNews.com

A New Jersey three-judge panel shot down an appeal lodged by school boards in three shore counties seeking to tweak the school funding formula lawmakers approved in 2018. The appellate panel denied the districts’ request for a reallocation of state dollars, siding with a lower court that found the districts lacked standing to bring the case. The plaintiffs claimed the changes were unconstitutional because they deprived them of due process and equal protection as well as wanting municipal payments-in-lieu-of-taxes agreements should be considered in the distribution of state aid because those agreements lower the towns’ tax bases and boost the funds received from the state. New Jersey Monitor

New Jersey’s Republican members of the Senate and General Assembly called for a special session of the Legislature in an effort to prevent a payroll tax increase on employers as well as focus on ways to repay debt and to restore stability in the state’s Unemployment Insurance (UI) Fund, including using available coronavirus federal funds. “The Murphy administration seems content on imposing the most expensive, irresponsible, and destructive solutions possible to fix our UI Fund,” said Senate Republican Budget Officer Steven Oroho (R-24). “It doesn’t have to be that way—we don’t have to put more employers and jobs at risk when reasonable alternatives are waiting for the Legislature’s consideration.” North-JerseyNews.com

The U.S. Census Bureau will release the final format of the 2020 census data on Sept. 16, two weeks earlier than previously announced. New Jersey Secretary of State Tahesha Way said the state will use the second data release date—not the first on August 12—to trigger the redistricting calendar. That means adjusted municipal and census tract population numbers to reflect people incarcerated in New Jersey prisons and jails must be released by Sept. 23. New Jersey Globe

And finally…Rutgers’ football home opener game with Temple has been moved to Saturday, Sept. 4 at 12 p.m. due to the impact of Hurricane Ida. ROI-NJ.com