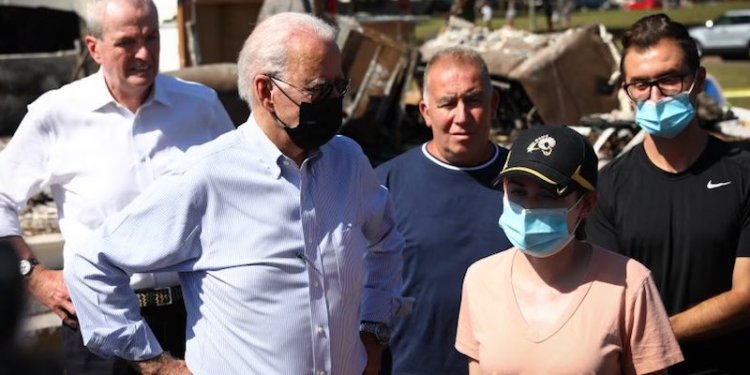 Before he toured the devastation that the remnants of Hurricane Ida did to New Jersey, President Joe Biden delivered a message that building back to what was there before is no longer sustainable.

At a press event before touring the damage in the Somerset County town of Manville, President Biden told local, state and federal officials that New Jersey is just the latest state in America that has been affected by climate change.

“The losses we are looking at today are profound,” said Biden at the Somerset County Emergency Operations Center Sept. 7. “Dozens of lost lives, homes destroyed, gas leaks causing fires, damaged infrastructure including the rail system…I am here to see first hand what the damage is and find out from you what is most needed.”

The President’s visit came after the Federal Emergency Management Agency (FEMA) approved a Major Disaster Declaration in Bergen, Passaic, Gloucester, Hunterdon, Middlesex and Somerset counties due to damages sustained from the remnants of Hurricane Ida Sept. 2. The declaration will allow individuals in the six approved counties to register for direct assistance for Ida-related recovery, which may include home repairs. ​​

While lawmakers in Essex, Morris, and Hudson counties were frustrated that they were not among the six counties receiving the declaration from FEMA, Biden pointed out more federal personnel were out in those areas to assess the needs of those areas.

“We are all in this together and have to make sure that we do not leave any community behind,” said Biden. “We want to make sure relief is equitable as those hardest hit get what they need. We know there is a lot more to do, that is why we are here.”

Later, White House Press Secretary Jen Psaki said the President was “quite amenable” to increasing the number of counties as Major Disaster Declarations.

“I was there in the room when he spoke with Gov. (Phil) Murphy last week, and what he conveyed to him is, ‘You just tell me what we need—what you need and—what you need to help the people of New Jersey to recover, and we’re going to work to get you that’,” said Psaki. “Sometimes these requests just take a moment to process, but the President has been quite focused on pressing his team to act and provide resources as they are requested.”

The President noted for decades, scientists have warned that climate change would result in extreme weather happening more often and causing greater damage.

“We are living through it now, we do not have any more time,” said Biden. “I have been on the road an awful lot—California, Idaho, Louisiana, Mississippi—every part of the country has been hit with extreme weather.”

Biden stated that the U.S. can not turn back the damages that climate change has caused but prevent it from causing greater damage going forward. Two federal bills—the U.S. Senate passed ​​Infrastructure Investment and Jobs Act as well the $3.5 trillion budget currently being written by Democrats—are tentpoled by spending to confront the effect of climate change.

The President said he wanted to hear the specifics from local leaders not to just return to normal but to get back to a place if it happened again the damage would be considerably less.

“I think this is an opportunity as the country has acknowledged that global warming is real and it is moving at an incredible pace,” declared the President. “We have got to do something about it.”

Biden noted that after touring New Jersey and New York he would be heading to a global conference about how world leaders can work together to deal with climate change that he sees as an “inflection point. We either act or we are going to be in real, real trouble.”

The Presidents praised the work of local politicians and responders and the coordination with FEMA personnel to help New Jerseyans.

“When we get local, state and federal working together, it is 10 times more than if just one was working to help people,” said Biden.

In introducing the President, Murphy said he was grateful for the speed the Biden Administration has been in responding to New Jersey’s  requests for assistance.

“No matter the hour, our calls have been answered and our concerns addressed,” said Murphy. “The President’s approval of our request for a Major Disaster Declaration opens the way for residents and businesses to get the direct federal help they will need to rebuild, restore, and move forward. New Jersey stands shoulder-to-shoulder with every community, every resident, and every business owner.”

Murphy echoched the comments of President Biden that the recovery from Ida is going to take a whole-of-government approach, “from town halls to the State House to the White House.”

“We are going to direct resources and aid to where they are needed,” said Murphy. “We will move mountains to put back what Ida tried to wash away. I know the President and his team are committed to this and will stand right alongside us in this effort.”