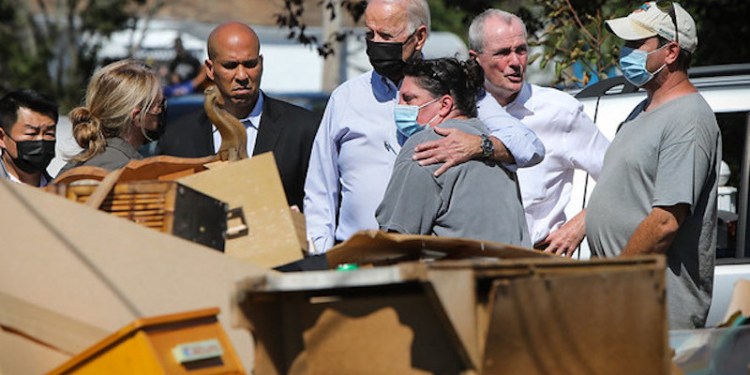 Seeing first hand the damage Tropical Storm Ida caused in New Jersey, Gov. Phil Murphy has remarked that a new plan is needed to tackle the increase in extreme weather events that strike the state.

Murphy at a press briefing on Sept. 8 floated the idea that any proposal going forward could feature “buying people out and just acknowledging that this part of a community is going to be—there’s no amount of mitigation we can put in place that is going to keep them from the reality of what we’re seeing, which is the intensity and the frequency of storms.”

The governor echoed the sentiments of President Joe Biden who stated during his visit to New Jersey to assess the damage that “you can’t build back and restore it…(you have) to get back to a place where, if it happened again, the damage would be considerably less.”

“That’s why I say with the increasing intensity and frequency of these storms, it’s inevitable that this is going to get worse before it gets better,” said Murphy. “We have to get the playbook not just up to where we are in 2021. We (have) to anticipate what this is going to look like over the next number of decades.”

The governor later added he was open to buying homes in “an area where it doesn’t make sense to have people living and just turn that into a natural runoff area for waters as they rise. It’s got to be creatively thinking through flood plains. It can’t just be barriers and levees.”

Since the day after tornadoes and torrential rains devastated all parts of the Garden State causing flooding that killed 27 people, Murphy has argued that New Jersey and the U.S. need a different playbook to deal with extreme weather events he sees being caused by climate change.

Murphy said those discussions have begun, starting with President Biden and members of the state’s Congressional delegation and including mayors and county officials. The buying of private homes would not be the first time the state participated in such as program due to a weather event. The state reserved $300 million to purchase homes damaged by Superstorm Sandy at pre-storm value through its Blue Acres initiative.

“Any infrastructure bill out of Congress would be a game-changer for us as we’re the most densely populated state in the nation,” he said. “We’ve got to be creative…we’ve got a location second to none, but we’re very exposed as a result of that location.”

Murphy recounted that on his tour in Manville with President Biden of hearing from homeowners that sustained damage from flood waters, some for the first time and others it being a regular occurrence.

The most immediate decision elected officials will face will be what to do with homeowners in flood plains. Murphy said it is a difficult subject for homeowners who have raised families and have warm memories in houses that are now subjected to flooding in ways they were not before.

“That’s got to be an option on the table that you don’t say with any amount of glee because people bought those homes,” he said.

But Murphy added in talks with “a fair number of people, including mayors, who’ve said enough is enough.”

New Jersey and federal officials are continuing to assess the severity of damage from Tropical Storm Ida in eight more counties as the state seeks additional federal help for residents impacted by the storm. The state’s Office of Emergency Management and FEMA have already toured Burlington, Hudson, Essex, Mercer Monmouth, Morris and Union counties and are expected to assess Warren County Sept. 9.

President Biden has so far declared six counties—Bergen, Passaic, Gloucester, Hunterdon, Middlesex, and Somerset—major disaster areas already, allowing residents to seek federal assistance to begin rebuilding. Lawmakers in Essex, Morris, and Hudson counties expressed frustration that they were not among the first counties to receive the declaration from FEMA.

Persichilli Pushes for COVID-19 Vaccine for Kids as Hospitalizations Rise