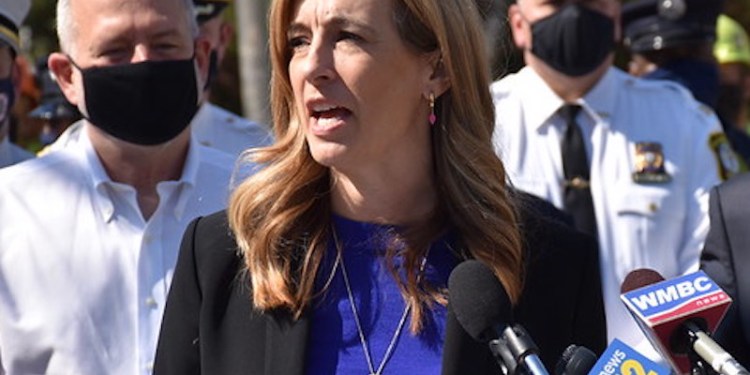 Rep. Mikie Sherrill says bipartisan legislation she introduced earlier this year will help Americans who lost their jobs during the coronavirus pandemic, enabling them to find good-paying employment that matches their job skills.

Her Expanding Pathways to Employment Act (H.R. 4338) would establish a fund authorized at $700 million over nine years to provide grants for “evidence-based workforce development and post-secondary education programs.”

The goal behind the bill, which is co-sponsored by Rep. David McKinley (R-WV), is to connect the unemployed with jobs that align with employer demand and “high-growth career pathways,” said Plinio Ayala, president and CEO of national tech training nonprofit Per Scholas. Ayala promoted Sherrill’s bill in a Sept. 3 op-ed for the New York Daily News, calling it “the missing link” in President Biden’s jobs plan.

Ayala argued that despite the rise of the COVID delta variant, the U.S. economic recovery is well underway from a labor standpoint.

Still, according to Ayala, the recovery has been uneven, often excluding people of color. Black and Hispanic workers disproportionately work in lower-wage industries.

“Clearly, there is a disconnect between the abundance of open jobs, the industries that are hiring, and the people who have the skills necessary to take them,” Ayala wrote.

Per Scholas is one of more than 70 groups advocating for its enactment. The groups penned a letter calling Sherrill’s Pathways bill “transformative” in bolstering programs with a proven track record for connecting the unemployed with high-quality jobs.

“I am so proud that this legislation received the endorsement of over 70 organizations because they know this bill will be incredibly helpful as people seek to take advantage of new opportunities in the workforce,” Sherrill said in an Aug. 4 statement touting the bill’s support.

The groups said the legislation links government-funded programs to measurable results by setting aside dedicated funding “for programs that have proven, based on rigorous evaluations, to work for their participants. Eligible programs will include those with statistically significant positive outcomes on earnings, student achievement, or degree completion.

“A program’s eligibility will depend on a number of factors including its impact relative to its cost, the quality of the evidence supporting it, and how intensively it focuses on promoting equity for those in historically underserved communities,” the groups said of Sherrill’s bill in their letter.

Even with the 70-plus groups that have endorsed Sherrill’s “Pathways” bill, the pathway to enactment may be a long one. It has just four co-sponsors and no Senate companion measure so far.

“We hope to see a Senate companion bill introduced soon. We further hope both chambers of Congress will prioritize action on this proposal this fall, especially in the context of broader legislation focused on workforce development, education, human services, and economic mobility,” the groups wrote.

Ayala said that President Biden’s original infrastructure plan, proposed in March, would have established funding for education and training programs to provide unemployed and underemployed individuals the skills needed to access higher-paying careers. However, Ayala said the current bipartisan legislation under consideration is a scaled-back version of the original plan and focuses more on transportation and public works projects.

“Federal support payments are set to expire in early September, and for those who are traditionally barred from better paying ‘pandemic-proof’ jobs, it is especially crucial that resources be made available to help those most impacted by the pandemic get back on their feet and make a meaningful wage,” Ayala added.

Sherrill said the federal Department of Treasury would be responsible for administering the $700 million fund that her legislation would authorize.

Rep. Donald Payne (D-10) of New Jersey is one of the bill’s four co-sponsors.

As of Sept. 10, the cumulative number of confirmed coronavirus cases in New Jersey was 969,062 with 2,173 total new PCR cases reported on Labor Day. There were 660 probable cases, bringing the cumulative total of antigen tests to 144,103. The total number of individual cases for the state is 1,113,062.

As for those that have passed, the state reported 15 confirmed deaths, bringing that total to 24,290. The state listed probable deaths at 2,749, bringing the overall total to 27,039. State officials noted 11 deaths occurred in the last 24 hours of reporting that have not yet been lab confirmed.

The state reported 1,167 patients were hospitalized; by region, there were 393 in the North, 388 in the Central and 386 in the South. Of those hospitalized, 268 are in intensive care units and 128 on ventilators. A total of 136 patients were discharged.

Health officials noted 151 long-term care facilities are currently reporting at least one case of COVID-19, accounting for a total of 1,059 of the cases, broken down between 571 residents and 488 staff.

The state’s official death total will now be reported as those that are lab confirmed, sits at 8,485 on Sept. 10. The facilities are reporting to the state 7,926 residents deaths and 145 staff deaths.