by North-JerseyNews.com
in County
0 0
1 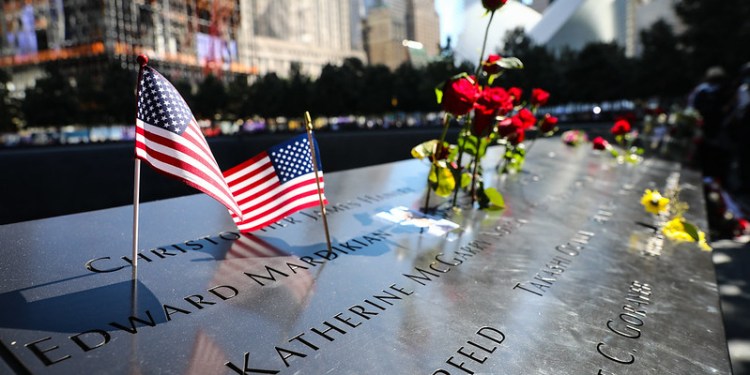 On the 20th anniversary of the September 11th attacks, remembrance ceremonies were held to honor the members of the North Jersey community and first responders who lost their lives in the horrific attacks. Nearly 3,000 Americans lost their lives from the 9/11 attacks, including more than 400 firefighters, police, and other first responders who ran in to help. New Jersey lost nearly 750 residents. Since then, more than 2,000 first responders and others who were in and around the World Trade Center have died since, as a result of toxic 9/11 exposure.

Following are images and excerpts from some of the remarks the New Jersey lawmakers made this year.

“Today is not a day for words. Today, words give way to reflection and remembrance. Today is a day to renew our commitment to the ideals upon which this country was founded, and which have flourished over more than 200 years – the ideals which were under attack 20 years ago today, liberty and unity. For every generation, there are moments seared into our collective memory – the events we can recall, without hesitation and with near-perfect clarity, no matter how much time has passed, exactly where we were, and what we were doing. September 11th is one of these days.

We feared for friends and loved ones – many who, to our great relief, were safe, including the thousands of precious lives that New York Waterway ferried to safety. But there are also the 750 New Jerseyans – among the many, many hundreds more – who, to our extreme grief, were lost. And there are also the towers, removed from the skyline in a matter of hours. 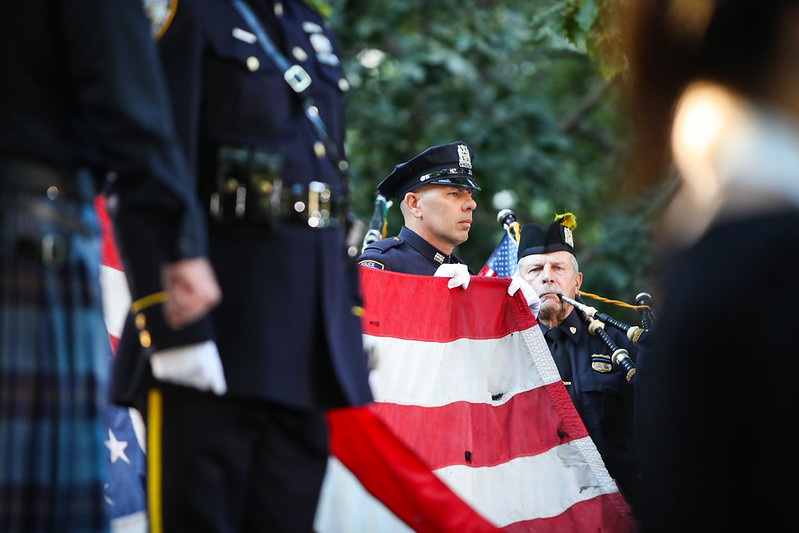 A span of twenty years means that while so many of us were alive to witness the attacks and their aftermath – whether we watched on television, gazed across the Hudson River from this spot, or stood on the streets of lower Manhattan – there is now an entire generation for whom 9/11 is just pictures and words. They are a generation who never viewed the silhouette of the Twin Towers against a rising sun. They never experienced the rite of so many schoolchildren before them of a class trip to the roof – where it seemed you could touch the sky itself.  And, hard as it is to believe, twenty years means they are now entering adulthood.

For them, there is a new tower. But, for us, we will always remember the Twin Towers, and empty sky of the night of September 11, 2001. Faith and the 9/11 Memorial Foundation, along with survivors and their families, are doing tremendous work to ensure that September 11th isn’t ever relegated to textbooks. The Empty Sky memorial is vital to this effort, as are the countless stories we must remember. But the work is not theirs alone.

As we commemorate this 20th anniversary, all of us must ensure this and future generations continue to honor all those lost on that day…

…The men and women who went to work, and the families who boarded planes, not knowing what lay ahead.

…The first responders who rushed to help, whether it be those receiving the wounded here in Jersey City, those rushing into the once-proud towers in New York, those racing to the smoking ruins at the Pentagon, or those called to an open field in the small town of Shanksville, Pennsylvania.

There is a saying, “Time heals all wounds.” Of course, for every saying, there is an exception. Today is certainly one. Time may have dried our collective tears, but time will never erase the names and the stories of those who were lost. They will always be in our hearts. Their memories will live within us, and as we look toward the heavens, the sky will never truly be empty.” 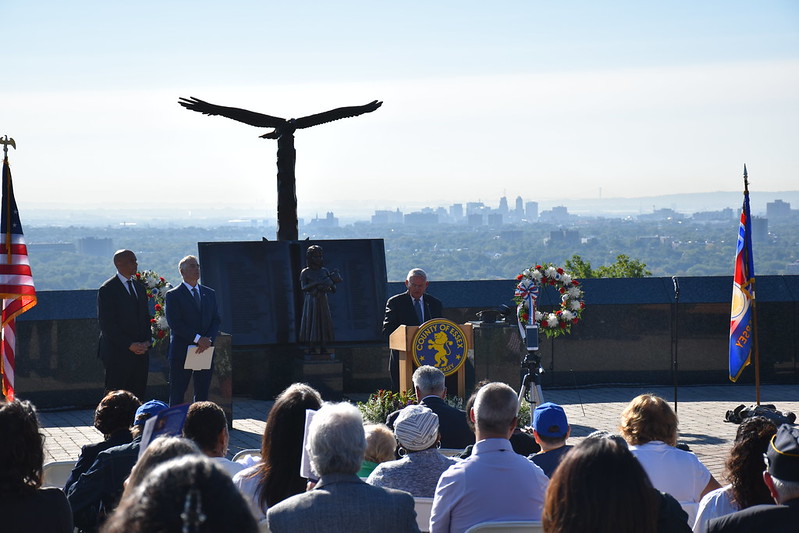 “Twenty years ago today we lost 3,000 Americans, including 750 New Jerseyans, in the worst terrorist attack this nation has experienced. Twenty years later, as we remember those who perished that day, we stand in solidarity with the families and loved ones who grieve for them and to renew our pledge to Never Forget.

“To all the 9/11 families who lost a mother or father, a son or daughter, a spouse, sibling, or loved one in those horrific acts of terror, I know there’s no way to qua

ntify the grief you carry in your hearts. You have carried that pain for twenty years. Twenty years of missed anniversaries, birthdays, graduations, holidays. Twenty years without those everyday moments we all take for granted. There is no way to put into words the constant ache of grief in your hearts. Time has a way of dulling pain, of softening the sharp edges, but there is no way to truly mend what is broken. Twenty years seems like an impossible amount of time to live without someone.  And although their physical presence is gone, their love never leaves.

“Our nation faces myriad challenges today, from a global pandemic to climate change to the proliferation of terror and extremism around the world and so much more. Yet all too often, where we desperately need unity, we constantly find division. I truly believe that if we can harness that unity and renew the compassion we felt for each other in the aftermath of 9/11, there’s nothing that we as Americans cannot overcome or achieve. 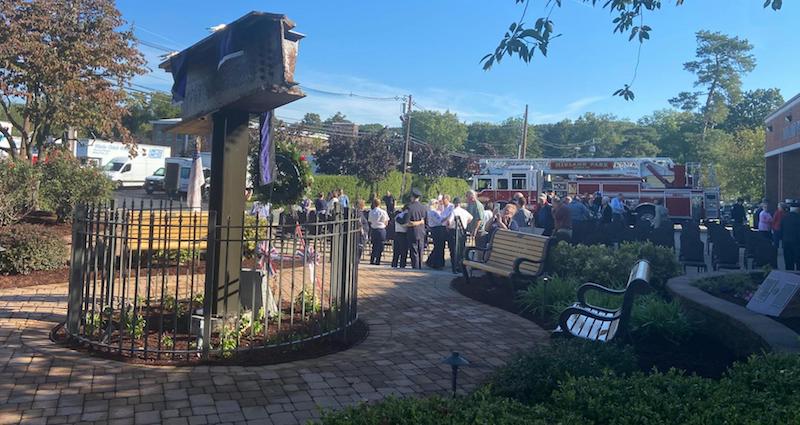 “Despite all that was taken from us, I still see a country bound together by love for family, pride in one’s work, solace in our diverse faiths, and unwavering commitment to freedom. These are the common threads that bind us together as a people and brought us closer together in the aftermath of September 11th. These are the values that united us and gave us the strength to overcome terror and show our enemies that the American people never give in to fear. And they are the values that empower us to go on living while cherishing the memories of those taken from us.

“May those we lost on 9/11 live on forever in our hearts. May the heroism we witnessed on that day inspire us for generations to come. And may the humanity and decency that united us those twenty years ago give us the wisdom and resolve we need to overcome the challenges of today and together, build a better tomorrow.” 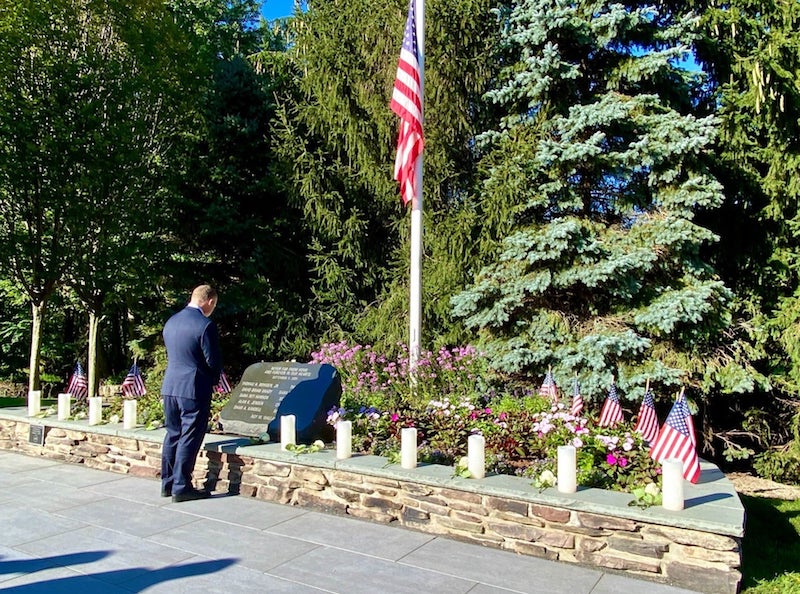 “With great loss, and in the face of great evil, our nation rose from the ashes and came together across any lines that divide us — party or region — especially here in North Jersey, where we will always live in the shadows of those attacks. Just as we did then, we still stand together — in unity as Americans — against those who only wish to tear us apart. For many, the exposure at the site has brought about cancer and illness — many years later — as if all the tragedy just that one morning was not enough. Thankfully, we have taken steps in Congress, to fight for and pass legislation to provide long-overdue support to cover 9/11 survivors, first responders, and their families. We are still fighting for them — and we must — for all of our first responders, and take all critical steps necessary to protect our homeland from ISIS-inspired and lone-wolf terror, and others who threaten our democracy and our very way of life.” 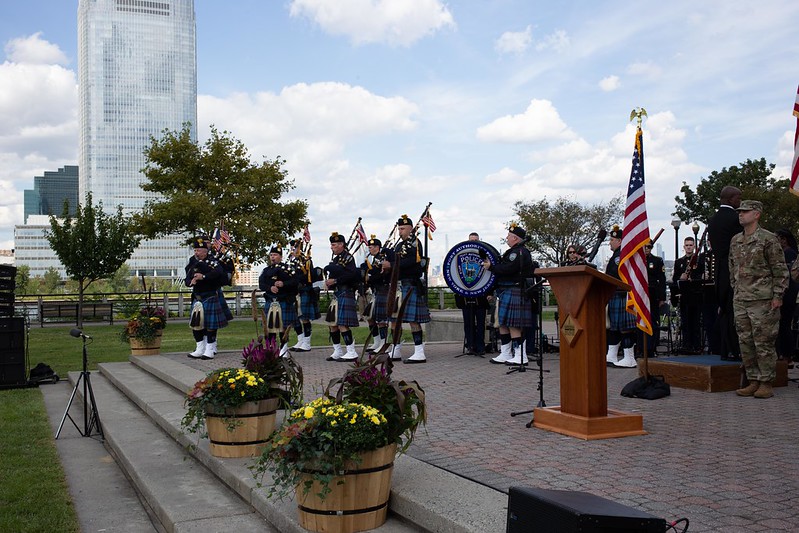 “For so many of us, it is difficult to believe it’s been 20 years since that fateful Tuesday morning in September, which changed our world forever and cost us so many loved ones.

“We all remember where we were that day. As a young Naval Officer, I was stationed at the US Atlantic Fleet Headquarters in Norfolk, VA. I’ll never forget the juxtaposition of a perfect fall day, beautiful blue skies, a crisp feeling in the air and the absolute horror of the attack as I manned my post in the headquarters. Amidst the chaos, with the Pentagon under attack and so much uncertain information flowing, our hours and days following the attacks were dominated by our coordination of the military response, scrambling jets and mobilizing forces to be on high alert.

“As we’d come to find out, 749 New Jerseyans died on 9/11, more than 90 of them residing in what is now the 11th Congressional District. As we do every year, we honor their lives by coming together as a community in each town across the district and continuing to keep their memories alive. We promised to never forget, and we keep that promise. 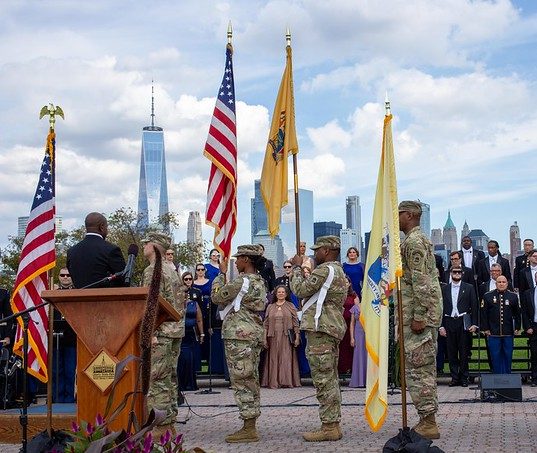 “We owe a debt of gratitude to our first responders from New York, New Jersey, and those who flooded in from all over the country to save lives and search for our loved ones in the rubble. Far too many of them lost their own lives as a result. And to this day, too many are still grappling with the health effects they incurred from their time on the pile. I’ve been so proud to be part of the fight, working for them to help make the 9/11 Victims Compensation Fund permanent. Our continued support for them is central to our efforts to never forget.

“As we gather at services, memorials, and events on this anniversary, it’s heartening to be able to be together once again after the year and a half we’ve had. I look forward to joining you all in towns throughout the district to remember, grieve, and honor our families, friends, and neighbors today.” 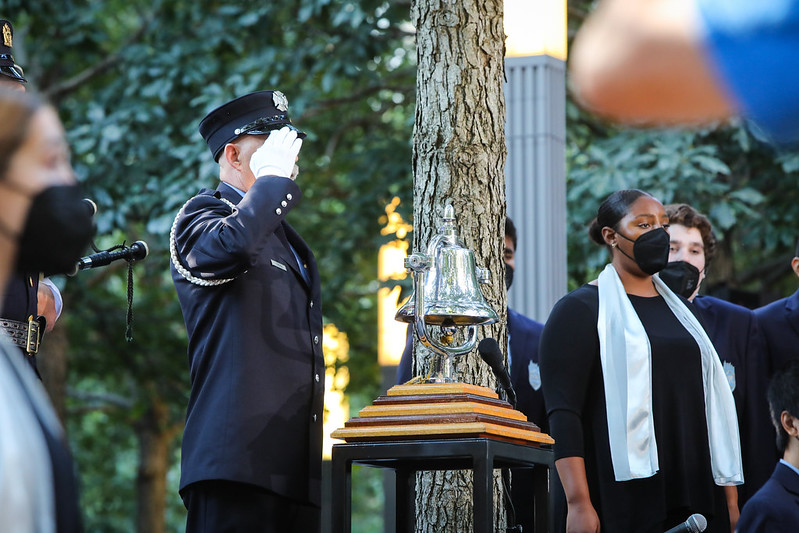 “The terrorist attacks of September 11, 2001 changed America forever. It showed us that we are not protected from the evils of global terrorism.  My condolences and prayers continue to go to the families who lost loved ones on 9/11.  We must always remember the people who died as patriots and heroes in our continued fight for liberty and freedom.  Also, we must remember how we came together as a nation to support each other after the attacks.  We came together as a country and defeated the terrorists who attacked us.  It is a unity we must remember as we battle the COVID-19 pandemic and other threats to our country.”

OPINION: What Happened to the Spirit of Sept. 12?