Support for vaccine passport varies depending on industry 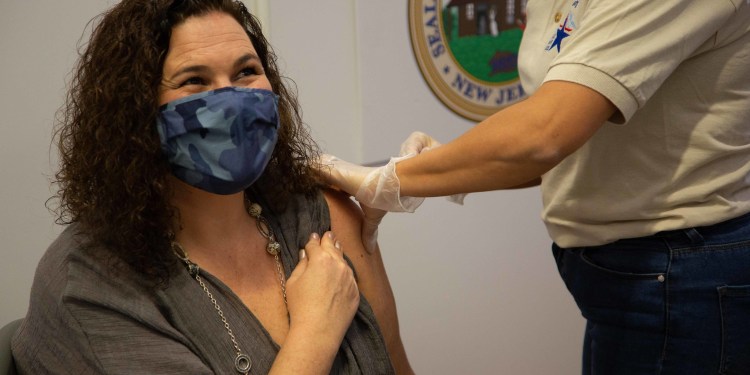 The popularity of COVID-19 vaccine and mask mandates continues to grow as a majority of Americans support the initiatives recently announced by President Joe Biden.

According to the Monmouth University Poll focused on the effect of the coronavirus pandemic across the U.S, the survey found support for instituting guidelines for masking and social distancing, as well as requiring people to show proof of vaccination for certain activities.

“The current poll shows majorities of residents in both red states and blue states support some type of COVID control measures, and that includes many of the mandates proposed by the President,” said Patrick Murray, director of the independent Monmouth University Polling Institute in a press statement. But a significant number of people—mostly Republicans—still remain opposed to getting the COVID vaccine.

Currently, 63% support state-based face mask and social distancing guidelines for these measures in their state, which is up from 52% in July. In Monmouth’s July poll, residents of states that voted for President Joe Biden (49%) were slightly less likely than those in states that voted for former President Donald Trump (54%) to support instituting these guidelines. Now, 66% (+17 points) of blue state residents and 59% (+5 points) of red state residents support these measures.

The poll finds that 66% of Americans support requiring the face masks mandate enacted in New Jersey by Gov. Phil Murphy for students, teachers, and staff —with 68% of blue states and 63% of red state residents backing the mandates.

In school settings, the poll finds majority support (60%) for requiring teachers and school staff to be vaccinated. But when it comes to students, the percentage drops to 51% of supporting a vaccine those aged 12 and older.

The poll also finds that 59% of  Americans support requiring people to show proof of COVID-19 vaccination in order to fly on a plane. Smaller majorities support the same requirement for going to an indoor arena for a sporting event or concert (55%), office settings (53%) and gyms (50%). Only 46% support one for indoor dining or attending an event at an outdoor arena.

“The Delta variant has dampened public confidence that we will get clear of this pandemic. That’s probably playing a role in broad support for mandates and other measures,” said Murray.

Just 11% of the public believes that the country will get the outbreak under control by the end of the year, a steep decline from six months earlier when 61% felt that things would start returning to normal by year’s end. At the other end of the spectrum, 22% of Americans feel that we will never get Covid under control and return to normal. Just 9% felt this way six months ago.

Currently, 75% of those polled report receiving at least one dose of Covid vaccine and 2% say they will get it as soon as possible. A majority of American adults (51%) say they are very likely to get a Covid booster shot if it is made available and another 16% are somewhat likely.

GOP the Party of Anti-Vaxxers

The poll continues to find a sizable amount of anti-vax sentiment. This includes 6% of the public who say they are still waiting to see how it goes before getting an initial Covid shot, 15% who will not get the vaccine at all if they can avoid it, and 2% who give no answer on their vaccination intent.

In prior polls, there were clear demographic differences between the wait-and-see group and the opposed group. Now that both groups have shrunk in size, they are looking much more similar in terms of their opposition to most pandemic containment measures. Among the nearly 1 in 4 who show anti-vaccine attitudes, 72% describe themselves as Republicans or lean toward the Republican Party.

Americans Not Doing A Good Job

“In prior polls we made a distinction between those who are vaccine-hesitant and those who are opposed. These results suggest that distinction has largely vanished and about a quarter of the adult population remains unlikely to get the vaccine without some sort of mandate,” said Murray. He added, “I think it’s possible some of the anti-vax people we poll do not answer the intent question honestly because more and more Americans disapprove of their stance as the pandemic continues to rage.”

Just 23% of those polled say the American public is doing a good job dealing with the coronavirus outbreak while 65% say it is doing a bad job. This is the most negative rating Monmouth poll participants have given to their fellow Americans since the pandemic started in March 2020.  The prior low point was in August 2020 (26% good job) while the high point was in May 2020 (51% good job).

As for those that have passed, the state reported 17 confirmed deaths, bringing that total to 24,399. The state listed probable deaths at 2,766, bringing the overall total to 27,165. State officials noted 22 deaths occurred in the last 24 hours of reporting that have not yet been lab confirmed.

The state reported 1,150 patients were hospitalized; by region, there were 392 in the North, 367 in the Central and 391 in the South. Of those hospitalized, 252 are in intensive care units and 128 on ventilators. A total of 142 patients were discharged.

Health officials noted 157 long-term care facilities are currently reporting at least one case of COVID-19, accounting for a total of 1,156 of the cases, broken down between 636 residents and 520 staff.

The state’s official death total will now be reported as those that are lab confirmed, sits at 8,505 on Sept. 17. The facilities are reporting to the state 7,936 residents deaths and 145 staff deaths.