Control of the courts, state houses was always the prize for GOP 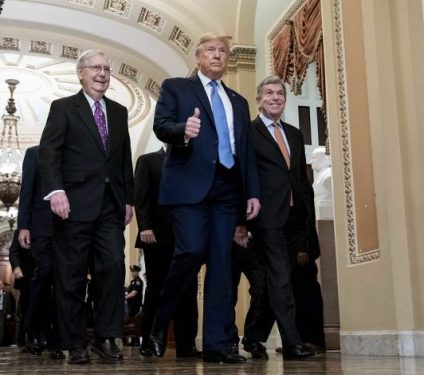 The recent U.S. Supreme Court decision to allow the Texas Heartbeat Act to go forward was a generation-long effort to ensure Republicans maintain power no matter whether they were the majority party in Washington and the U.S..

The GOP in the last 20 years has prioritized winning state house elections and appointing federal judges to life-long positions in an attempt to further their agenda. It is all legal, above board, and done right in front of our eyes. We come to this subject matter not to defend or promote it, but to give an explanation of how it happened.

While Democrats express outrage over just before midnight ruling without any arguments in front of the full court, they only have themselves to blame. They have held power in Washington at least twice during this time, but were unable to secure the nominations to the Federal bench that the Republicans did while not building a national machine prioritizing local state house races in ways their counterparts across the aisle did.

The GOP, especially Sen. Mitch McConnell, were ruthless in their path to assure the Federal Courts had a conservative majority. McConnell successfully ran the clock out on now Attorney General Merrick B. Garland’s nomination by President Barack Obama in March 2016 to fill the vacancy created by the death of Antonin Scalia. Eventually, President Donald Trump nominated and the Senate confirmed Neil Gorsuch to the vacant seat.

Going against his own precedent of a Supreme Court nominee should not be considered in a Presidential election year, McConnell shepherded the rapid approval of Supreme Court Justice Amy Coney Barrett in 2020 after the death of Justice Ruth Bader Ginsberg. Sandwiched in between was the highly controversial confirmation of Justice Brett Kavanaugh.

The appointment of 245 federal judges, the second most by any President in a four year period, and the possibility of three Supreme Court justices were large selling points for Republicans in voting for Trump. While the former President might have been an imperfect vessel for a cohort of GOP voters, they voted for him because due their top priority remaking judicial system and the Supreme Court into a conservative majority for years to come due to the three Trump justices being under the age of 55.

In the Texas abortion restriction case, the court is backing the will of GOP lawmakers. This will not be the only case that makes its way from the Lone Star State testing if the constitutional rights of citizens are being restricted to make it to the Supreme Court. The law tightening voting rules, SB1, is expected to follow the same path as the abortion bill. And we suspect any mandates President Joe Biden issues in a bid to curtail the coronavirus will end up in front of the nine justices.

All of these maneuvers are about power. When you cater to an increasingly smaller base, politicians will go to great lengths to maintain their influence. This is an outgrowth of only once winning the Presidential popular vote since 1992.

The Democrats are beginning to engage in this as well. They have decided to go it alone and use the reconciliation process to pass a $3.5 trillion budget bill that devotes money to their priorities—expanding America’s social infrastructure and earmarking funds for climate change initiatives. This budget bill stands in contrast to the $1 trillion bipartisan infrastructure bill the U.S. Senate recently passed.

Besides the courts, Republicans have poured resources into winning state houses across the nation, now controlling the governor’s mansion and two houses in 25 states. Democrats hold only 15 trifectas, including New Jersey, and 10 are split.

This could easily lead to Republicans regaining the House of Representatives in 2022. States have the power to redraw congressional districts how they see fit, often gerrymandering a map to maximize the number of districts that favor the party in power at the state capitol.

The Texas Heartbeat Act is a case study on how the Republican long game to maintain and use power through the courts and legislative bodies outside of Washington. We hope those who are the gatekeepers of this responsibility keep the will of all the people in mind and not just those who put them there.