Dem gameplan is simple: Vote "yes" on infrastructure while continuing to work on reconciliation budget 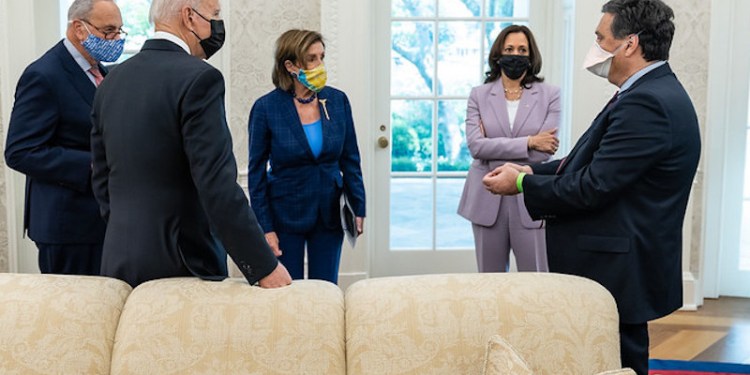 One of the key selling points in the 2020 election by Democrats was that they would be a party who would govern in a manner that produced results.

The party is on the threshold of losing that political weapon due to the demands and actions of the radical left wing of the party.

Their first major test is set for Sept. 27, the day the overwhelmingly popular bipartisan Infrastructure Investment and Jobs Act is set to be voted upon by the House of Representatives. But in the days leading up to the vote, the push by progressives to link it to a yet-to-be written $3.5 trillion social infrastructure bill could blow up the Democrats and President Joe Biden’s agenda—paving the way for Republicans to regain the Senate and House in 2022. That is what is at stake.

Sen. Chris Van Hollen (D-MD) summed it up best when he stated “We’re at the moment of truth here, the clock’s ticking and we’ve got to find a way to get everybody on the same page.”

Democrats—whether they are liberal, moderate or conservative—have expressed support for the critically needed investments in both bills. Progressives lawmakers have already won the arguments that infrastructure is more than bridges, roads, tunnels and rails, making Americans understand that government spending priorities in the 21st Century goes beyond things we build. There is a generational shift affecting millions of Americans in any budget bill passed.

But the reconciliation budget—an attempt to get diverse liberal priorities such as expanding healthcare, addressing climate change, tax fairness and childcare—is still being negotiated. And with Sens. Joe Manchin (D-WV) and Kyrsten Sinema (D-AZ) continually balking at key provisions and the cost, when a deal will be agreed upon is unknown.

To show their political strength, progressives scored a legislative victory this week by forcing party leaders to strip funding for the Iron Dome, the $1 billion missile defense system that saved countless lives in Israel from Hamas’ rocket attacks earlier this year. The House would later go on to to fund the Iron Dome by a 420-9 vote.

Their “win” exposes the disconnect for those inside this left wing bubble that believe we should not be helping the only democracy in the Middle East. Led by Reps. Alexandria Ocasio-Cortez (D-NY), Ilhan Omar (D-MN) and Rashida Tlaib (D-MI), they are on the precipice of becoming the liberal version of the Republican’s Freedom Caucus—a small minority within the party willing to forego legislation helping Americans and their party’s political gains if it does not meet their purity test.

Rep. Pramila Jayapal (D-WA), leader of the Progressive Congressional Caucus, confirmed this when she declared that passage of the budget bill in the Senate was needed to persuade progressives to vote for the infrastructure bill. After meeting with Speaker of the House Nancy Pelosi, Jayapal stated she has 40 votes against the bipartisan legislation unless the reconciliation budget is voted on the same day.

That raised the ire of House Majority Leader Steny Hoyer (D-MD), who warned that if the infrastructure vote was rejected because a block of liberals voted “no” in an effort to maintain their leverage, it would have the opposite effect.

“There will not be a positive reaction to help coalesce our caucus if the infrastructure bill goes down,” Hoyer said. “I don’t agree with the judgment of those who think somehow it will compel the moderate wing of the caucus to be more supportive.”

For those arguing that moderates wing, led by Rep. Josh Gottheimer, did the same thing with the infrastructure bill, the circumstances are completely different. The nine centrists secured a date for a bill that 1) had already passed the House, 2) had passed the Senate after modifications with the House and 3) was agreed on by all members of the party. And let us stress this again: There is no budget bill to vote on.

Politics is about using any leverage you have to advance your policy objectives. But in the end, you must the votes to pass the legislation. Simply put, the reconciliation budget bill at its $3.5 trillion price tag is not going to pass. Progressives deserve a significant role in shaping the budget and the legislative agenda for Democrats. But they do not get the final say.

The radical left wing of the Democratic party has a choice to make. They can continue to negotiate to form a foundation on programs that will move this country forward, starting with voting to pass the infrastructure bill.

Or they can be seen as dragging down a party that had portrayed itself as the adults in the room. This will greatly increase the chance of handing back the Congress to Republicans where significant gains on climate change, healthcare and tax relief for the middle class will not only be rolled back but completely undone.

It is as simple as this: All Democrats vote to pass the Infrastructure Investment and Jobs Act on Sept. 27. Keep negotiating on a budget deal that funds progressive priorities. Otherwise, Dems be portrayed as dysfunctional as Republicans when it comes to governing.