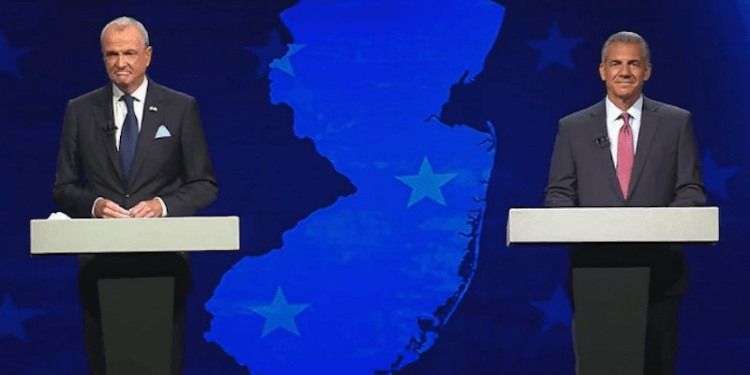 Gov. Phil Murphy and GOP nominee Jack Ciattarelli squared off in a spirited debate Sept. 28 in the first of two debates for the race that will decide who is the state’s leader for the next four years.

The two candidates faced questions from a panel of four journalists during the hour-long televised debate from at the Performing Arts Center in Newark that focused on Murphy actions around the coronavirus pandemic and Tropical Storm Ida; women’s issues, including sexual harassment and abortion; immigration; police reform; taxes; the actions of Donald Trump that lead to an insurrection attempt on Jan. 6; climate change; critical race theory and sexual education; marijuana legalization; and gun control.

Both candidates stuck to issues they have raised during the campaign: Murphy attempting to tie Ciattarelli to the former President  and the extreme positions of those who attempted overturn the 2020 Presidential election results. Conversely, Ciattarelli portrayed the governor as being a tax and spend Democrat who has made New Jersey a less safe state.

Ciattarelli emphasized his key talking point from his campaign so far, criticizing Murphy on taxes being too high, using the incumbent’s statements that if property taxes are a voter’s issue, New Jersey is probably not that person’s state. The GOP nominee attempt to shine the spotlight on what he sees as the governor’s mistakes since being elected in 2017, including scandals at Edna Mahan Women’s Correctional Institute and decisions made in returning COVID patients to New Jersey’s nursing homes.

The sharpest exchange came after Ciattarelli was asked about his involvement at a rally in New Jersey Jan. 6 that featured signs such as “Stop the Steal” and attendees wearing attire that promoted hate.

While stating that he has always said President Joe Biden is President and Trump’s rhetoric led to the U.S. capital riot, Ciattarelli claimed he “shouldn’t be held responsible for the signs at the rally and we didn’t see offensive apparel.” Additionally, he compared it to Murphy being at rally’s that feature slogans such as “Defund the Police” and “No Justice No Peace.”

“When did ‘No Justice No Peace’ become controversially?” asked Murphy “This rises to the level of disqualifying…your picture and name were on the invitation.”

Ciattarelli shot back that Murphy should be disqualified for decisions he made that led to the death of nursing homes residents in the early days of the pandemic and Tropical Storm Ida.

The subject of COVID was brought up numerous times during the debate. Ciattarelli blamed Murphy for the large number of deaths at long term care facilities, noting the Governor was told his actions would cause untold deaths by nursing home operators.

Murphy forcefully attempted to fight off that charge, stating operators were instructed to make sure to isolate patients returning from hospitals, as they were being sent back to nursing homes because “they were their homes.”

Later, Ciattarelli was questioned if he still believes “children are not vulnerable to this virus” as he had stated earlier this year.

“I wish I could have said it more perfectly but my position has not changed” that children are less likely to have a severe case or be hospitalized because of COVID, stated Ciattarelli. He encouraged residents to get vaccinated as he is but reiterated that masking of students and decision to not get the vaccines as ones that should be made by individuals, not by government mandate.

“This is the biggest contrast between us,” said Murphy. “The tragedy is we have playbook that works and Jack is throwing out the playbook.”

Having parents decide what is appropriate for children lead to another fiery exchange between the two. Ciattarelli was questioned about his comments on the campaign trail about LGBTQ+ curriculum being taught in K-8 classers as well as criticism of critical race theory.

The Somerset County resident had decried the teaching of gender roles to kindergarten students and teaching sodomy to those attending middle school on the campaign trail this year.

“Why does sexual id have to be taught to kindergarteners and a sex act to middle school students?,” said Ciattarelli. “It’s a subject that should be discussed by parents, with their kids at the kitchen table.”

Murphy attacked Ciattarelli for using the word “sodomy” as a dog whistle, “an utther offense to the (LGBTQ+) community…how can you say you are open to them when you use that word? I thought we got rid of the us vs. them (mentality) when Trump left. ”

Ciattarelli also struggled to answer how to combat systemic racism and explained that he believes critical race theory teaches students that “white people are the oppressors.”

Murphy said he supports “teaching the whole truth and nothing but the truth” of what slavery and oppression has enacted in U.S. history.

The candidates did find common ground on immigration, with Ciattarelli supporting the decision by Murphy to enable illegal immigrants to obtain a driver’s license and supporting Dreamers. Both candidates agree the need to address climate change but differed on spending priorities.

But that was about the only matters they agreed on. The sharpest divides centered around policing, the legalization of marijuana, the treatment of women and taxes.

Ciattarelli continued to drive home his campaign’s spotlight of Murphy downplaying New Jersey’s high taxes, including stating “he has raised every tax and toll he can since coming into office.”

In response, Murphy pledged that he would not raise taxes over the next four years if re-elected and attempted to frame the issues as having to clean up the mess created by Republicans over eight years during the Christie Administration.

“We inherited an affordability crisis that he rubber stamped every step of the way,” said Murphy of Ciattarelli. “These guys created a mess and left it for guys like me to clean up.”

In his closing statement, Ciattarelli ridiculed Murphy for wanting to make New Jersey an East Coast version of California and asking if residents were better off than they were four years ago.

“My focus will be to create more jobs, to make it more competitive for business to come here,” said the former Assemblyman. “I will go to Trenton to downsize and modernize as the future of our state is at stake.”

Murphy argued that now was not the time to return to the failed Republican policies that left New Jersey in a financial mess.

“We have turned the page on a new era, a sunrise in New Jersey,” said Murphy. “So much progress has been made but our work is not done. We can not afford to slip backwards. I am asking for four more years to finish the job.”

The back and forth between the incumbent and former Assemblyman comes as Murphy has maintained a double digit lead going back to when each won their parties nomination in June. The latest statewide poll shows Murphy with a 13 point lead.

The Ciattarelli camp is hoping for a good performance to cut into that lead. While trailing in North and Central Jersey by significant margins and one point in South Jersey, this was the first showcase of Ciattarelli for many that were tuning in. A recent Monmouth Poll notes half the New Jersey electorate has no opinion of Ciattarelli. In terms of overall impressions, Ciattarelli registers a net positive opinion of 31% favorable and 19% unfavorable. Conversely, 48% of the state’s voters have a favorable view of Murphy while 37% have an unfavorable opinion.

The two candidates will debate a final time at 8 p.m. on Oct. 12 at Rowan University in Glassboro.