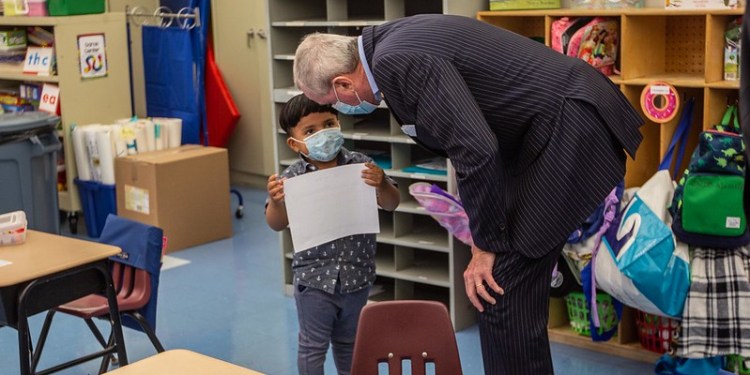 A Stockton University poll shows that Garden State residents continue to support mandates that look to contain the spread of the coronavirus and Gov. Phil Murphy’s handling of the pandemic since March 2020.

Additionally, the poll found Republican challenger Jack Ciattarelli continues to chip away at Murphy’s lead, with the Sept. 29 poll showing the incumbent’s lead now in single digits for the first time since June.

New Jerseyans voiced strong support for policies aimed at controlling the virus, including 58% backing a mask mandate in schools, 56% supporting a mandate that employers with more than 100 workers require them to be vaccinated or be tested weekly for the virus and 63% wanting a vaccine requirement for healthcare workers.

But half of those polled oppose requiring proof of vaccination to enter restaurants, public events, or entertainment venues, 50% to 46% in support.

The handling of the pandemic, the top issue by the largest percentage (25%) of those surveyed, continues to be a strong issue for Murphy. Respondents said Murphy would better manage the pandemic over Ciattarelli at 50%-34%.

The poll showed Murphy still has a nine point percentage lead over Ciattarelli, 50%-41% including voters who lean toward one candidate or the other. Nine percent are undecided or not liking either candidate in the statewide poll of likely voters taken before the two squared off on the debate stage Sept. 28.

Murphy has held a double digit lead since the first head to head poll after the June primaries. A Monmouth poll released a week ago showed a tightening race, 51% of registered voters polled said they would support the first term governor while 38% back the former Assemblyman. In August, the polling outfit found Murphy with a 52% to 36% lead.

Murphy received positive job ratings of 54%  in the Stockton poll from, with 41% disapproving of his performance. He is viewed favorably by 50% and unfavorably by 43%, with only 5% unfamiliar with the governor.

The Stockton poll includes some positives for Ciattarelli in other issues paramount in the race. With taxes being a major line of his attack against Murphy, 46% said Ciattarelli would be better at handling New Jersey tax policy compared to 38% for Murphy on that issue. The candidates are nearly even when it comes to better managing the state economy—43% for Ciattarelli and 42% for Murphy.

“Even though this result is a statistical tie, an incumbent wants more people feeling good about how things are going in the state,” said John Froonjian, director of the Hughes Center at Stockton.

The polling outfit quired about a gambling initiative on the ballot this November. A plurality of voters (45%) opposed a constitutional amendment on the ballot that would allow gambling on college games held in the state or games in which New Jersey college teams participate, while 40% support the proposal and 14% are unsure.

As for those that have passed, the state reported 20 confirmed deaths, bringing that total to 24,613. The state listed probable deaths at 2,787, bringing the overall total to 27,400. State officials noted 11 deaths occurred in the last 24 hours of reporting that have not yet been lab confirmed.

The state reported 1,060 patients were hospitalized; by region, there were 335 in the North, 353 in the Central and 372 in the South. Of those hospitalized, 233 are in intensive care units and 126 on ventilators. A total of 112 patients were discharged in the last 24 hour reporting period.

In regards to cases related to in-school transmissions, the state has tracked 44 school outbreaks and 214 cases linked to those outbreaks since the 2021/2022 school year starting Aug. 7, up 21 outbreaks and 112 cases from the week previous. According to state officials, the cases account for 182 students and 37 teachers in 38 communities across 16 counties.

Health officials noted 151 long-term care facilities are currently reporting at least one case of COVID-19, accounting for a total of 1,178 of the cases, broken down between 641 residents and 537 staff.

The state’s official death total will now be reported as those that are lab confirmed, sits at 8,543 on Sept. 29. The facilities are reporting to the state 7,961 residents deaths and 145 staff deaths.