OPINION: Lack of Details on $3.5 Trillion Budget Should Concern All Americans 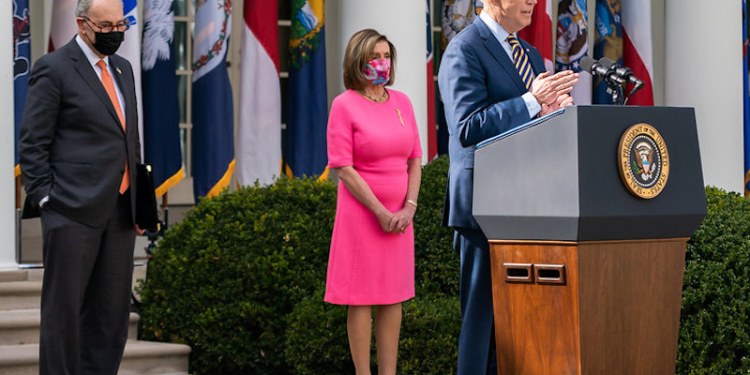 What is in the proposed $3.5 trillion reconciliation budget that progressives and Democratic party leaders are pushing?

We know what is wanted: expansion of healthcare, childcare, and Pre-k. Legislation that will confront climate change. Tax fairness, which we hope means removing the deduction of the state and local tax cap.

But we do not know what the funding levels are, if they are new programs or expansion of old ones. And more importantly, how much those new programs will cost not only now but going forward.

It’s unfair but Democrats are held to a different standard then their Republican counterparts when it comes to governing. They are asked to pay for their programs. Yet there is not an eye batted when it comes to GOP spending or cutting taxes without corresponding spending cuts that are the main drivers of federal debt.

The $1 trillion infrastructure bill has bipartisan support because the results are tangible—we may be stuck in traffic during construction of roads, bridges and tunnels, but we see those government expenditures, and the jobs going with them, in front of us.

Entitlements can be a dog whistle in politics. But that does not mean that the questions of new programs or expansion of old ones should not receive scrutiny of where our tax dollars will be spent. We believe a serious discussion should include eligibility requirements tied to prioritizing aid to the most in need, including earning levels of recipients.

We would like to see something that addresses the labor shortage currently affecting businesses big and small across the country. Senators and Representatives should work to strike the right balance of offering help and relief—with childcare at the top of the list—without removing incentives to work.

And when we raise the subject of tax fairness, we are not only talking about the removal of the cap on state and local taxes (SALT) deduction. Lawmakers must be focused on closing loopholes so that corporations and the most affluent are paying their fair share of taxes just like the overwhelming majority of middle-class Americans.

The fissions that have been born in the last week—moderates against progressives, Senators versus Representatives—is a natural extension of the big tent that Democrats rule by. This is not a new problem and there will be more fights ahead. But it’s the details and costs that are being argued; the big picture is that Dems are united in looking to make change that is long lasting.

We tend not to be in the prediction business but we will make this exception: a budget that funds priorities Democrats campaigned on to win the Presidency, Senate and House will become law in the near future. It should not and will not be $3.5 trillion—especially after $900 billion coronavirus pandemic aid in December 2020 and $1.9 trillion American Rescue Act was approved earlier this year—but it will address an assortment of other key issues that President Joe Biden championed in defeating Donald Trump after his one term.

That will be paired with the overwhelmingly popular bipartisan Infrastructure Investment and Jobs Act to rebuild our transportation systems and expand to include 21st century needs like broadband to underserved communities and upgrading water pipes that go back to the Eisenhower Administration.

Now is time for lawmakers in Washington to stop talking past each other in the media and negotiate in good faith on both sides, looking for common ground to get a deal done. There are serious trust issues that Speaker of the House Nancy Pelosi, Majority Leader Chuck Schumer and, most of all, President Biden must fix within their caucuses.

Progressive and Moderates in the Democratic party are, like it or not, similar to Butch Cassidy and the Sundance Kid when they were deciding whether to jump off the cliff or not. While hesitant at first, they soon came to realize that going together was the only way they could survive.

Left and Centrist Dems might not like it, but they need each in order to pass an agenda that continues to move the nation forward. If not, the policies of the Trump Republican party—on climate change, on healthcare, on women’s reproductive rights—will resume unabated.