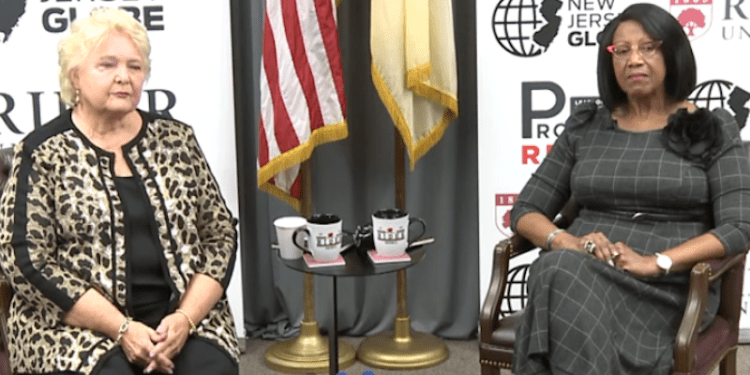 Democratic Lt. Gov. Sheila Oliver and Republican former State Sen. Diane Allen pitched their dueling visions for New Jersey on Oct. 5 during the first and only debate for lieutenant governor.

Allen defended her reputation as a moderate—which has been questioned since she was named Republican gubernatorial candidate Jack Ciattarelli’s running mate—due to comments she’s made about undocumented immigrants and her more conservative talking points on gun control.

But Allen maintained her views have not wavered throughout the years, citing her record in the Legislature in support of gay marriage and anti-bullying legislation, labeling herself as “socially moderate.

“I’m still that person who voted for gay marriage, long before President Obama even backed it,” Allen said.

Oliver defined herself as fiscally responsible and socially progressive, arguing that the two do not have to be mutually exclusive of one another.

“I do believe you can be (both),” she said. “Instead of bearing labels, whether we’re conservative or to the left or to the right, if we do what is necessary for people, that’s being progressive in this country. And we can be fiscally conservative at the same time.”

Topics that showcased the difference between the two veteran lawmakers during the hour long debate held at Rider University included abortion, the economy, COVID-19, gun control, race relations, and the decision making process by Gov. Phil Murphy, including those involving women.

Oliver said the key to fulfilling the no tax hike pledge during a second Murphy term that the Governor made a week earlier will be expanding the state’s economy. She said this is possible as the administration plans to keep “building an innovative economy” in New Jersey that will lead to an expansion of the state’s revenue base, citing growth areas that include the film industry and medical and higher educational institutions.

“Every time we turn around, see a new tax on business and see businesses leaving the state,” she said.

Allen is in lockstep with Ciattarelli’s position opposing a recent law in Texas that effectively bans abortions because it “cuts off abortion too soon…(it) pits people against each other in a very strange way.”

While she generally supports abortion rights, Allen is of the opinion that the proposed Reproductive Freedom Act pending in the Legislature goes too far and would lead to third-trimester terminations of pregnancies that she opposes. Those medical procedures are currently allowed when the health of the mother is in question.

“We don’t want the Texas law [banning abortions after six weeks], that’s for sure,” Allen proclaimed. “But this law in New Jersey, were it to pass, would mean that … you could have an abortion in the seventh, the eighth, or the ninth month, right up to the day a child is born. I don’t think that’s what New Jersey really wants.”

Oliver predicted the State Senate and Assembly would pass the Reproductive Freedom Act, a bill Murphy recently redoubled his support for to enshrine a woman’s right to choose in the state and has vowed to sign it before the end of the year.

“There is no turning back as it relates to Roe vs. Wade,” the lieutenant governor said. “There is no question in my mind that Senate leadership and Assembly leadership and their caucuses…will move toward voting affirmatively for the Reproductive Freedom Act that has been proposed.”

In regards to the subject of vaccines, Oliver argued in strong support for one that includes COVID-19 for those eligible.

“We have a public health system because we have to make certain that everyone’s health is protected,” Oliver responded. “Vaccination is something that protects not just the individual that receives it, but the public and the community at large.”

Asked if she support the seven vaccines children are required to get to attend public schools in New Jersey, Allen affirmed she did but echoed her running mate’s position that it should be a decision left between a parent and their doctor.

“We need to make sure we’re doing it the right way,” Allen said, who supports exemptions for religious or medical reasons. “It’s not one-size-fits-all.”

“My son nearly died from a vaccine shot, an MMR shot, when he was a child. We didn’t know whether he would survive it. He did, and we continued with his vaccines but it was over a much longer period of time and much less product each time he got the shot,” said Allen, who said the same approach continued with her four grandchildren. “A parent needs to talk with the doctors, and to make sure it’s right.”

The two candidates quarreled over Murphy’s actions during the pandemic. Like Ciattarelli in the debate a week earlier, Allen criticised the decision by the Murphy Administration that returned patients with COVID-19 back into long-term care facilities and blamed them for the death of more than 8,500 residents and staff members of New Jersey’s nursing homes from the virus.

“It was a terrible thing to do,” Allen said. “It’s still painful to think about.”

Supporters of the governor have refuted this argument, noting residents were being returned to their homes, that the order called for them to be isolated from the main nursing home populations and the fear hospitals were reaching capacity at the height of the crisis.

Additionally, Allen contentended there was poor planning in the early days of the pandemic and state officials should have been better prepared to operate the state’s schools and other services remotely.

“In other states, children were able to go to school every single day, no one got sick, there were no problems, and their education was at a much higher level than in New Jersey,” Allen said. “I worry about our children.”

Oliver pushed back against the narrative, arguing the actions on schools have been focused on stopping the spread of COVID among students’ families and faculty. She said the Murphy administration had “worked admirably” to make remote learning as accessible and educational as possible, even to students without the proper resources.

“Phil Murphy and I, and our administration, closed that digital divide,” she said. “Every student in New Jersey was provided with access to a tablet or a laptop. That closed that down.”

The biggest divide may have been on the issue of gun control. Allen repeated that officials “need to review” the state’s strict concealed carry law that forbids many people from successfully getting a license approved. She gave an example of a domestic violence victim who was killed by an ex-boyfriend while awaiting a gun permit.

The former news anchor noted that despite New Jersey having the strictest gun laws in the country, gun violence continues to rise and that lawful firearm owners “are not the people who are causing these crimes.”

“We do actually have a Second Amendment in the Constitution that says you have a right to bear arms,” said Allen as she defended her votes against some gun-control measures. “And if you say, ‘Well, you can no longer use any gun that has X, Y or Z,’ then pretty soon you’re taking all the guns away from people.”

Oliver said that “gun violence is out of control” in New Jersey and railed against expanding concealed carry laws.

“Why in the world would we have a law in New Jersey where I could walk into the Starbucks or McDonald’s and the guy next to me would have a weapon?” she asked. “(Concealed carry) is wrong for New Jersey.”

The issue of White privilege was raised as it was in the first debate, with Allen and Oliver finding some common ground. Oliver, the first Black lieutenant governor, said “there are opportunities and the provision of assets that are afforded to one class and race of people that are not afforded to another.”

Allen noted that “many people who are White, we are able to accomplish things and do things thinking we’re doing it on our own when in fact we’re doing it because we’re being given a little leeway because of our color. Most of us are probably not aware of that as it happens.”

Oliver added that privilege can manifest itself in the form of generational wealth, which many white New Jerseyans have and which most New Jerseyans of color do not.

Allen pressed an attack line that has been at the heart of the GOP ticket’s campaign: that Murphy is not strong enough in standing up for women. She repeated comments Ciattarelli has made in ads and during last week’s debate that Murphy’s 2017 campaign was “toxic” for woman and that the governor ignored allegations of rape and other problems for over a year at Edna Mahan Correctional Facility, the state’s only women’s prison.

“If there’s an issue and the woman has a problem, the governor is nowhere to be found,” said Allen, filed a gender and age discrimination complaints against CBS before entering politics. “I am concerned this governor is unable to handle confrontation.”

Oliver, who spent 14 years in the Assembly and the only Black woman to serve as speaker, countered by observing that Murphy has chosen more women than men to fill his Cabinet.

“Gov. Phil Murphy is the only governor, in my experience, that has women at the table making decisions, major decisions, on a daily basis,” said Oliver. “Half of our cabinet is comprised of women, women holding very important and prestigious positions, women who are able to take their departments in a number of different directions. That didn’t exist in other gubernatorial administrations. You had to, like, call daddy to ask.”

The lieutenant governor noted her own role, that she is often in the room when Senate President Steve Sweeney, Assembly Speaker Craig Coughlin and Murphy meet. Oliver joked that Sweeney calls her the “Steve whisperer” because she can always explain what he means.

“I am in the room, and I am able to influence things,” she said. “I can pick up a phone and I can call Senator Sweeney on an issue and get cooperation. I can do the same thing with Craig Coughlin, our speaker.“

In her closing statement, Oliver repeated one of Murphy’s themes of “moving New Jersey forward” and not going back to policies put in place by his predecessor, former Republican Gov. Chris Christie.

“In the Murphy-Oliver administration, we can walk and chew gum at the same time; we can focus on investments in education and healthcare, and making certain that our small businesses can thrive,” Oliver said. “We are going to move New Jersey forward, include everyone and not perpetuate divisiveness in the state of New Jersey.”

That is not a vision that Allen shared in her closing statement that centered on New Jersey needing to be fixed because it is broken.

“I don’t think that Phil Murphy and Sheila Oliver care enough about the people of New Jersey,” said Allen, who went on to list issues pertaining to the pandemic, small businesses, the unemployed and the New Jersey Motor Vehicle Commission.

Recent polls have put Murphy’s lead over Ciattarelli at between 9 and 16 points. Murphy and Ciattarelli will meet Oct. 12 for the campaign’s final debate, being held at 8 p.m. at Rowan University.