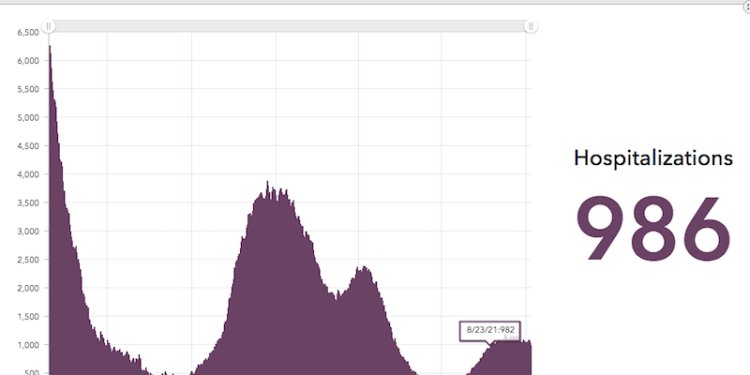 The day before hospitalizations in New Jersey dropped below 1,000 for the first time in 45 days, state officials expressed confidence that new COVID-19 cases were beginning to trend down and hospitals would be able to handle any expected uptick in the coming months.

On A Downward Curve

Later, Murphy would go further in stating “this feels like a sign that the curve is dropping as it goes through the various waves. So the first wave was the first; it went down. It kicked back up; the second wave wasn’t nearly as bad. It kicked down. Delta brought it back up but not as bad as the second wave.”

Persichilli explained that her department every two weeks evaluates the assumptions around predictive modeling and currently expects an increase in cases after Thanksgiving. The variables cited that impact forecasts include the efficacy of vaccines, the CDC recommendations on who can get vaccinated and when, and daily health metrics including hospitalizations as well as patients in ICU and those on ventilators.

“If we compare ourselves today to what happened last year, we do expect an uptick,” said the commissioner. “I can say with the decreasing hospitalizations and steadying of the cases, the predictive modeling we’ve just done is far different than it was even three weeks ago, and that’s why we update it every two weeks.”

New Jersey Department of Health Medical Advisor Dr. Edward Lifshitz said while it is too early to give any definitive trends in terms of what is happening in schools, what health officials have seen “overall it’s relatively reassuring.”

Persichilli stressed that the uptick forecast for between Thanksgiving and Christmas will be “within a range that can be handled very well by our hospitals.”

The state reported 986 patients were hospitalized, the first time it has been under a 1,000 when the state recorded 982 on Aug. 23; by region, there were 305 in the North, 296 in the Central and 385 in the South. Of those hospitalized, 234 are in intensive care units and 126 on ventilators. A total of 152 patients were discharged in the last 24 hour reporting period.

As for those that have passed, the state reported 15 confirmed deaths, bringing that total to 24,754. The state listed probable deaths at 2,797, bringing the overall total to 27,551. State officials noted 11 deaths occurred in the last 24 hours of reporting that have not yet been lab confirmed.

In regards to cases related to in-school transmissions, the state has tracked 69 school outbreaks and 379 cases linked to those outbreaks since the 2021/2022 school year starting Aug. 7, up 30 outbreaks and 267 cases from the week previous. According to state officials, the cases account for 319 students and 60 teachers in 62 communities across 18 counties.

Health officials noted 162 long-term care facilities are currently reporting at least one case of COVID-19, accounting for a total of 1,294 of the cases, broken down between 701 residents and 593 staff.

The state’s official death total will now be reported as those that are lab confirmed, sits at 8,560 on Oct. 7. The facilities are reporting to the state 7,974 residents deaths and 145 staff deaths.