Pascrell: North Jerseyans ‘Getting Stuck With the Short End of the Stick’ 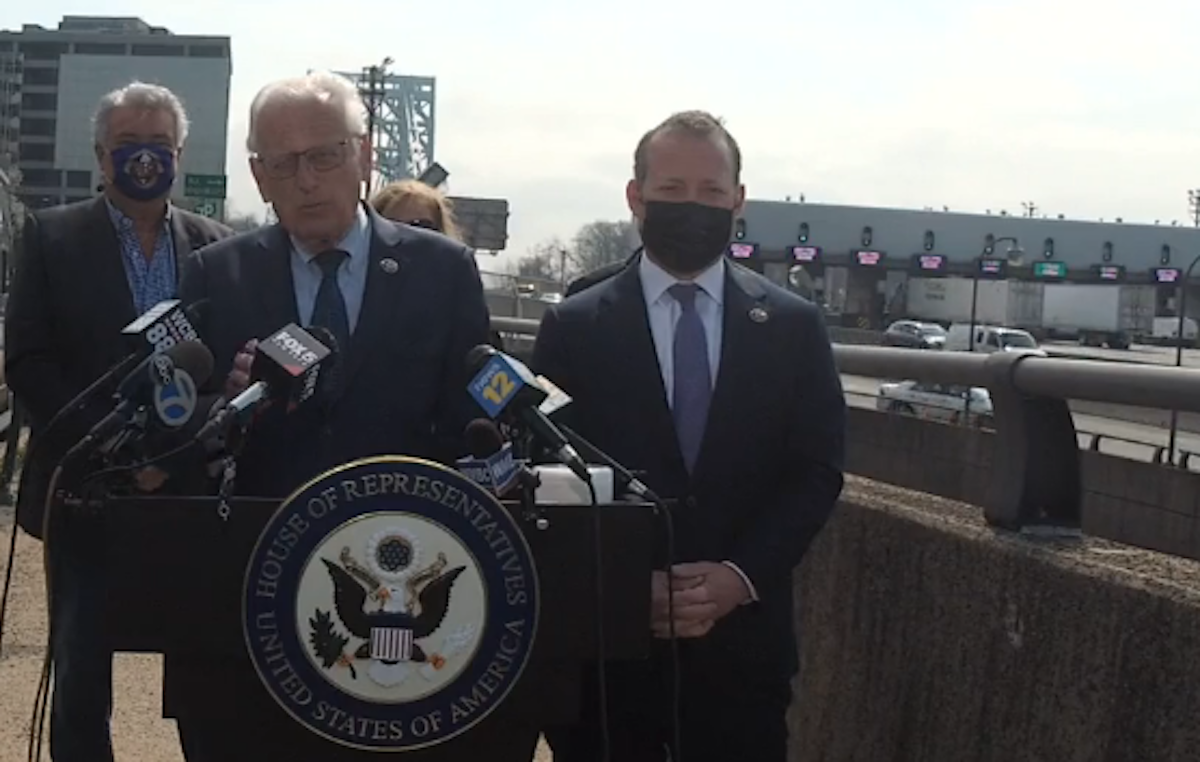 New York City’s congestion pricing plan is still more than a year away from being implemented, but New Jerseyans’ tempers are flaring now as the Metropolitan Transit Authority holds a series of hearings on the plan.

Two people who are especially hot about the issue are New Jersey Reps. Bill Pascrell (D-9) and Josh Gottheimer (D-5). Both New Jersey lawmakers urged that the congestion tax be scrapped.

“Once again, North Jerseyans are getting stuck with the short end of the stick,” Pascrell said at MTA’s Oct. 4 virtual hearing.

Jersey Commuters ‘Will Get Whacked’

MTA is holding a total of 10 public hearings focused on specific geographic areas affected by the planned tax, which is known more formally as the Central Business District Tolling Program. New York state legislators approved the congestion tax in 2019 under which commuters entering Manhattan between 60th street and the Battery would pay an additional fee beyond the toll they already pay. Three additional upcoming hearings will focus on the environmental assessment process for the congestion tax.

“Under this proposed congestion tax, when New Jersey commuters drive across the GW Bridge and into Midtown, they will get whacked—not only with the GWB $16-a-day toll, which is ridiculous—but now an additional tax when they drive south of 60th Street,” Gottheimer said. “That’s up to $31 dollars a day or more in total, just to drive to work in New York City.”

Pascrell expressed anger at New York “for trying to jam a tax hike onto the backs of New Jersey commuters.” He expressed anger at federal Transportation Secretary Pete Buttigieg who he said never responded to a letter expressing concerns over the planned tax.

“We outlined our many concerns and demanded only fairness. We have still not heard any reply. It’s an outrage!” he said.

“President Biden promised not to raise taxes on middle class families. I hope federal officials remember his commitment as they review this scheme,” Pascrell added in his testimony.

New Jersey Gov. Phil Murphy (D) opposes congestion pricing and has threatened to hold up business before the Port Authority, as a means of leverage. One option Murphy has mentioned is vetoing the minutes of the Port Authority—which would block any decision made by the Port Authority’s board from being enacted.

Murphy was asked about the issue at an Oct. 4 press briefing. “There’s an infrastructure required to actually implement congestion pricing and the infrastructure includes, at least in part, infrastructure that the Port Authority has to put in place, tolling in particular,” he said.

Backers of congestion pricing contend that traffic has gotten out of hand in Manhattan and that congestion pricing will get more people out of their cars and onto public transportation, thereby reducing gridlock and improving air quality.

Additionally, the Tri-State Transportation Campaign said in an Oct. 4 statement that a goal of congestion pricing is to raise $1.5 billion annually for the MTA. Funds would be used “to modernize subway signals, make the system almost fully accessible, improve bus service, and bring Metro-North trains to Penn Station,” the group said. The TSTC describes itself as an advocacy group “that fights for an equitable, safe, multi-modal transportation network.”

PATH, NJ Transit Would Get Nothing

In his testimony, Gottheimer focused on the harm to New Jerseyans who drive into Manhattan for work and the fact that New Jersey’s public transportation systems would receive none of the funds generated by the tax.

“Unlike the shared Port Authority resources from the tolls, which help both our states, every nickel of this new congestion tax will go solely to the MTA. Not a cent will be shared with the PATH or NJ Transit to help Jersey. That’s unacceptable,” Gottheimer said.

“Levying a new regressive tax on Jersey commuters, who already pay a fortune to get into the city, and millions in New York state taxes, is no way to make this region stronger. Instead, this is simply an attempt to mooch off of New Jersey,” the congressman added.

The Tri-State Transportation Campaign said it analyzed 21 legislative districts in central and northern New Jersey using U.S. Census data and concluded that an average of just 1.6% of workers would be subject to a congestion tax. On average, 77.5% of Manhattan Central Business District workers use public transportation to reach the Central Business District from New Jersey.

“Our data analysis shows that the majority of New Jersey commuters entering the CBD for work are taking public transit, and those constituents should not be ignored by their elected officials,” said Renae Reynolds, Executive Director of Tri-State Transportation Campaign. “NJ elected officials should support congestion pricing and put their energy behind improving New Jersey’s mass transit. Reduced congestion in the CBD benefits New Jersey’s transit riders, and when more people take mass transit, it improves our air quality and our collective quality of life.”

Pascrell worried that the environmental assessment being conducted for the planned congestion tax would be “a rushed rubber stamp.”

“We need a real environmental review on the impact for all stakeholders, especially New Jersey commuters,” Pascrell said. “We have no sense of how traffic at the Hudson River crossings will be impacted. Some will see more traffic, some less. That burden will be on our state.”