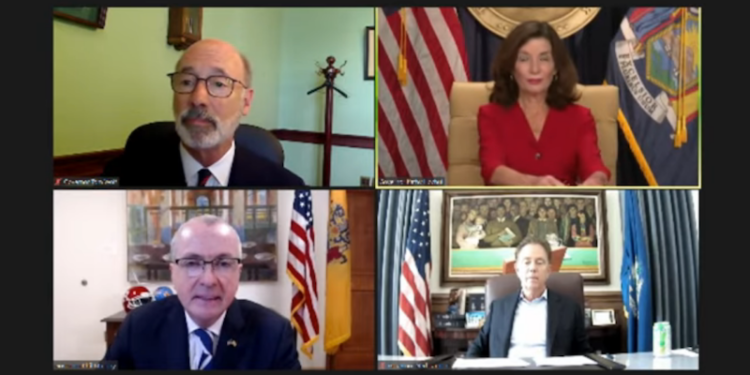 In an effort to stem the tide of gun violence that has engulfed New Jersey as well as the rest of the country, a group of Northeastern governors agreed to share data on guns used illegally on a wider level.

Gov. Phil Murphy was joined by New York Gov. Kathy Hochul, Connecticut Gov. Ned Lamont, and Pennsylvania Gov. Tom Wolf on Oct. 7 in signing a Memorandum of Understanding to share crime gun data in an effort to prevent gun violence and enhance public safety. The agreement allows law enforcement agencies from the four states to distribute the data across state lines in order to detect, deter, and investigate gun crime, as well as identify and apprehend straw purchasers, suspect dealers, firearms traffickers, and other criminals.

Murphy stated that the multi-state approach reaffirms the four Democratic governors collective commitment and shared goal of “ending gun violence in our communities and enhancing public safety throughout the region.”

“Firearms trafficking networks frequently engage in criminal activities on an interstate basis, and in order to prevent gun violence in our communities, we must work collaboratively as a region,” said Murphy at the virtual signing ceremony. “By sharing vital gun crime information with New York, Connecticut, and Pennsylvania, we are equipping our law enforcement agencies with the necessary resources and intel to analyze, track, and deter gun violence.”

Shootings and gun-related homicides are up in New Jersey, according to data from the New Jersey State Police. Between January and May, 87 people were shot and killed, up 36% from the same period in 2020. That mirrors a national trend as from Jan. 1 to Sept. 15, a total of 14,516 people died from gun violence in the country, according to the Gun Violence Archive. That’s a 9% increase from 2020.

Wolf connected the rise of gun violence with the coronavirus pandemic, believing the increase stems in part by the stress, fear, and anger people have felt over the last year and a half while support networks have been “stripped away.”

”Gun violence cuts right to the heart of our communities, tearing families apart,” Wolf said, who noted Pennsylvania saw a 48% increase in gun homicides last year “It sows fear. It sows distrust. And just like so many forms of systemic inequality, interpersonal gun violence disproportionately affects people in communities of color.”

Hochul stressed that putting an end to the gun violence epidemic requires an “all-hands-on-deck collaborative approach” which the memorandum provides.

“(This) is why we are taking an important step forward (in) working with New Jersey, Pennsylvania and Connecticut to share crime gun data between our respective states,” said Governor Hochul. “This regional partnership will give law enforcement the resources they need to combat gun violence, save lives and make our communities safer.”

New Jersey, which has some of the toughest gun laws in the nation, has tracked about 85% of guns used in crimes between January and July of this year came from out of state. Of those, 25% came from Florida, Georgia, and South Carolina alone, which led Murphy to state “our region too often is the final destination for guns in this Iron Pipeline.”

“Guns don’t understand the concept of state lines, but those who purchase them do,” Murphy said. “Working together, we can as a region put in place the safeguards we need to combat the trade in illicit guns.”

Wolf added, “If we want to reduce the scourge of gun violence, we must work with partners in our communities, as well as our neighboring states, to curb the flow of illegal guns and those used to commit criminal acts. This collaboration among our states will be an important resource to protect the public and I’m proud to work with New Jersey, New York, and Connecticut on the shared goal of making our communities safer.”