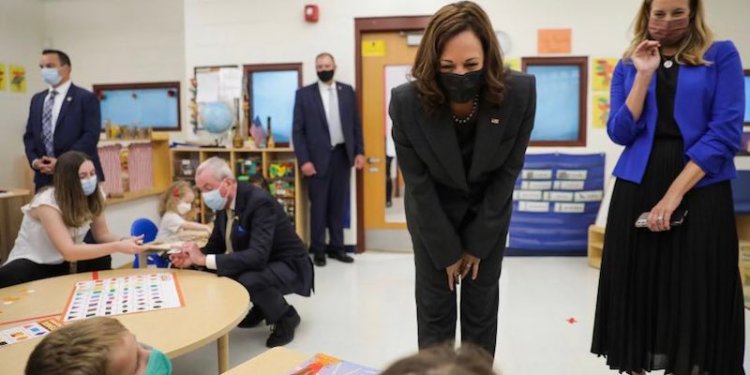 Harris, joined by Gov. Phil Murphy and Rep. Mikie Sherrill on Oct. 8, toured the Ben Samuels Children’s Center at Montclair State University before participating in a roundtable discussion with childcare providers and working parents from North Jersey to discuss the impact the coronavirus pandemic has had on childcare for families.

“Since the beginning of the pandemic, two million women have left the workforce,” Harris said. “The main reason that many of them did is the unavailability of childcare. And let’s be very clear: A working person cannot go to work if they have children if there’s no one to take care of their children. It is that basic.”

Harris pointed out the high cost of childcare for North Jersey residents—if they are able to find one—is one that the Biden Administration is attempting to lower as the U.S. attempts to recover from the coronavirus pandemic. In New Jersey, infant care for one child cost almost 15% of the median family income before the pandemic, while care for two children cost upwards of 25% of their income.

“One of the issues that the President and I have been working on with the support of Congress is to say, ‘No one should spend more than 5% to 7% of their income on childcare,’ especially when you look at the other obligations that families have, such as putting food on the table and paying rent,” said Vice President Harris. “Nearly half of New Jersey lives in childcare deserts. And we are seeing across the country these numbers.”

The roundtable participants addressed the challenges that have arisen as a result of the pandemic, the need for additional childcare resources, and the economic benefits addressing this crisis would have across New Jersey and the nation. During the pandemic, almost 1.8 million women dropped out of the workforce, many of them due to childcare and school closures.

Rep. Sherrill pointed out that as a working mom of four kids, this is an issue that hits home for her and was welcomed by the Vice President highlighting the critical need to invest in the nation’s childcare system, and the overwhelming benefit addressing this problem will have for the U.S. economy.

The Montclair resident has look to address the issue in the House by supporting two bills—the Child Care is Essential Act and the Child Care for Economic Recovery Act.

“We know the pandemic drove more than a million parents out of the workforce and strained a childcare system that was already unaffordable and unavailable to too many families,” said the Congresswoman. “Making the right investments to fully address the childcare crisis is projected to address the workforce shortage by filling 1.6 million jobs and boosting GDP by more than $360 billion.”

The lawmakers noted that prior to the pandemic, the Center for American Progress found that there were over four children under age 3 for every licensed care spot in 2018. The pandemic has caused a wave of childcare center shutdowns that have greatly worsened this shortage, making childcare even more inaccessible for working families.

Vice President Harris tied her visit with the continuing negotiations to pass a social infrastructure bill that she noted the pandemic brought to the forefront. While the $1 trillion Infrastructure Investment and Jobs Act is set to be passed by the House, a vote has been delayed until Democrats in the House and Senate can reach a deal between the progressive and moderate wings of the party on such items as childcare, tax fairness and climate change.

“We have a moment born out of an awful crisis—extreme loss of lives, loss of jobs, loss of normalcy—to do something that’s not just about taking a small step forward but is transformational,” Harris told NJ.com. “There’s a public awareness and a demand that we go big in fixing the big problem.”

Harris and other federal lawmakers believe that the priorities and the spending of the two bills are intertwined.

“You look at the needs that working families have in terms of roads and bridges,” Harris said, “and then you couple with what we need to do with the childcare issues.”

“There should be a sense of urgency. Time is of the essence,” the North Jersey lawmaker. “We have people struggling now. This is impacting people’s ability to get back to work, this impacts employers’ ability to reopen fully. These are investments we’re making so we can remain competitive with China and Europe.”

Besides her stop in Montclair, Harris met with Rep. Donald Payne, Jr. at the vaccination site at Essex County College where Harris thanked the healthcare workers and encouraged those that have not yet done so to get vaccinated.

“It was an honor to welcome Vice President Kamala Harris to our district to help promote vaccinations and tour the vaccination site in Essex County,” said Payne, Jr.  “Essex County has suffered terribly during this global pandemic. But I have been proud of how the county has been quick to get this vaccine site operational and provide vaccines for thousands of residents.”