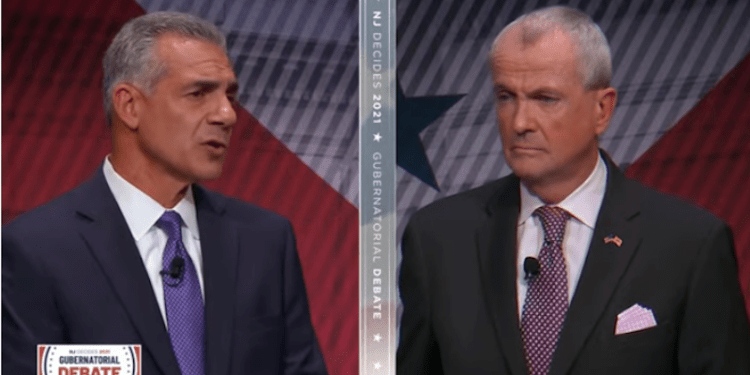 A debate that focused on the issues for most of the night ended with Gov. Phil Murphy defining his opponent, Republican nominee Jack Ciattarelli, as too extreme for New Jersey.

In his closing statement at the Oct. 12 debate, Murphy made the case that Ciattarelli was okay with being comfortable with the same forces of the Republican party that overran the U.S. Capitol Jan. 6.

Starting with his theme of having to continue to move forward as compared going backwards, Murphy then launched into his attack stating, “We can not afford an extreme leader. There is so much at stake—do we stand with our sacred democracy or stand with Confederate flags, White Supremacist and a pack of lies.”

“Do we continue to make the tough calls based on science and data to save as many lives as we can or do we put lives at risk because we play politics” as he pointed at his opponent over a mix of cheers and boos that grew louder as he continued.

Murphy finished by saying “Do we stand for women’s reproductive freedom or do we think as my opponent thinks that Donald Trump’s greatest legacy is his three Supreme Court justices…I know where I am, don’t sit this one out folks.”

The governor’s attack came after Ciattarelli argued he was the one to lead New Jersey over the next four years as “the state we love is broken. It needs to be fixed and that is what my candidacy is all about.”

“My plan is is very simple: lower property taxes with a new school funding formula, I want to create more jobs by making New Jersey the best place in the country to do business, I want to downsize, modernize and streamline our state government, I want to support the men and women in blue…I want to get back to basics in teaching critical life skills in our schools.”

He finished, “With regard to our state of affairs, I firmly believe we can do better. And when I am governor we will.”

The fireworks at the end were preceded by a debate that focused on the issues. Both candidates stuck to the themes they have raised during the campaign: Murphy attempting to tie Ciattarelli to the former President while Ciattarelli portrayed the governor as being a out of touch with poor leadership skills.

Ciattarelli emphasized his key talking point from his campaign so far, criticizing Murphy on taxes being too high, using the incumbent’s statements that if property taxes are a voter’s issue, New Jersey is probably not that person’s state. The GOP nominee to shined the spotlight on what he sees as the governor’s mistakes since being elected in 2017, including the numerous scandals at Edna Mahan Women’s Correctional Institute.

Topics covered in the debate included choices made during the coronavirus pandemic, when would a review of the Murphy Administration action during the pandemic be done, school mandates on vaccine and masks, unemployment, the budget, taxes, the school funding formula, helping immigrants during COVID-19, if Ciattarelli would campaign with Donald Trump, commuting senses over marijuana arrests, the makeup of the State Supreme Court, the Reproduction Freedom Act, White privilege, civilian review board for police, climate change flood, clean energy, a dedicate revenue source for NJ Transit and affordable housing.

Ciattarelli’s best moment came after Murphy looked to shift the blame for the poor record of NJ Transit on the Chris Christie administration.

The GOP challenger, who has campaigned on Murphy’s lack of leadership the past two years, said “You asked for the job…it infuriates New Jerseyans that it’s always the previous administration’s faults or Trump’s fault. I promise I will not blame the Murphy administration when I am governor. We will get the job done.”

When asked if he would campaign with Trump, Ciattarelli answered that he doesn’t look for endorsements or campaign trail partners. The former Assemblyman said Trump had some success as President in terms of the economy, in foreign policy and immigration. But that he disagreed with him on such important issues to New Jersey such as the Gateway Project and capping the deduction for state and local taxes (SALT).

“I will win my own election,” said Ciattarelli.

After fumbling the question about White privilege in the first debate, the Somerset County resident acknowledged the advantage a White person has over a Black or Brown one. He said the way to address it is economically by prioritizing Black communities so that they have access to healthcare, improving their educational choices with charter schools and addressing food deserts.

“We have got to bring economic development to Black communities,” said Ciattarelli.

The subject of COVID was brought up, Ciattarelli looked to make an issue of a recent photo where the governor was on stage at a fundraiser without a mask as well as many of those in attendance, chiding Murphy for inconsistent leadership.

Murphy fired back, noting that “we are on stage right now without masks in front of big crowd.”

Murphy attempted to portray Ciattarelli as ready to govern the pandemic by easing restrictions in the same manner Republican governors who were more relaxed with their mask and vaccine mandates.

“The tragedy is that there is a playbook that folks ignore that puts lives at risk in Texas in Florida,” said Murphy. “Vaccines and masking are playbooks that work, ignoring them puts people at risk.”

Abortion was an area where the candidates clashed much like in their first debate. Murphy said that on top of his agenda is to get the Reproductive Freedom Act passed when state lawmakers reconvene in November.

The governor said a woman’s right to choose is in “clear and present danger. Everything is based on the case law of Roe v. Wade” that Trump’s three Supreme Court justices just voted against in the Texas Heartbeat Case and he expects to in the upcoming Mississippi case.

Ciattarelli said he was for a women’s right to choose and would follow the science in making sure that an abortion did not happen after 20 weeks.

In regards to the Reproductive Freedom Act, he opined that “anytime a law is passed in a lame duck session, it’s because it’s a bad bill.” He further noted allowing an uderage women to have abortion without parental consent “is extreme. That is not New Jersey but that is Phil Murphy…I do not think (the Supreme Court) will overturn Roe v Wade.”

Murphy said he would be “very happy if the Trump packed Supreme Court” did not overturn Roe v Wade. But he was doubtful and that is why New Jersey needs to pass legislation as soon as possible.

The GOP nominee was focused throughout the night on revamping the school funding formula as well as making changes to affordable housing regulation that has produced sprawl in the suburbs. He chided Murphy as well for not approving a charter school in Newark during his tenure despite residents wanting one.

Additionally Ciattarelli brought up the loss of jobs and people moving out of the state, including the closing of the Nabisco factory in Fair Lawn earlier this year.

Murphy said he would make sure to increase funding for the Blue Acres program to buy homeowners out of flood zones and prompted his clean energy program as a boon to the economy, especially in South Jersey.

The governor said that he was working to get the economy back to where it was before the pandemic hit and cited his administration for giving out the third most aid in the U.S. to small businesses to help them through the last 19 months, only behind New York and California.

The two candidates in the first debate at the Performing Arts Center in Newark Sept. 28 focused on Murphy actions around the coronavirus pandemic and Tropical Storm Ida; women’s issues, including sexual harassment and abortion; immigration; police reform; taxes; the actions of Donald Trump that lead to an insurrection attempt on Jan. 6; climate change; critical race theory and sexual education; marijuana legalization; and gun control.

The clash between the incumbent and the former Assemblyman comes as Murphy has maintained a double digit lead for most of the campaign going back to when each won their parties nomination in June. The latest statewide poll shows Murphy with a nine point lead.