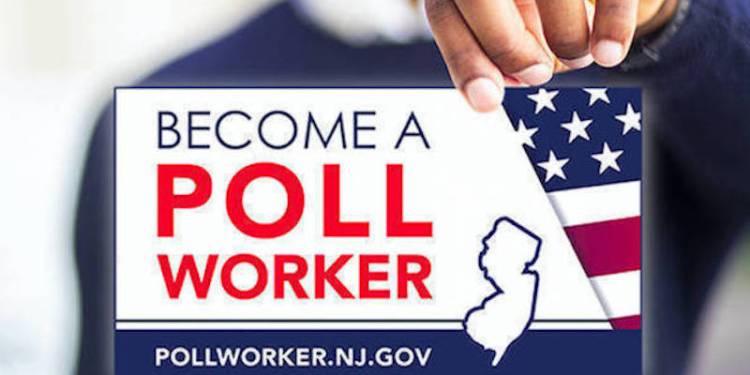 After workers who were hesitant to return to Election Day work during a pandemic created shortage of poll workers, an increase in pay has resulted in the state being full staffed starting with early voting Oct. 23.

Gov. Phil Murphy said in the week since making the announcement, a total of 13,500 new poll workers have signed up to work this year’s election.

“We had estimated that we were 10,000 workers short,” said Murphy during a virtual press briefing Oct. 13. “We have now filled that need and then some.”

Murphy signed Executive Order No. 266 on Oct. 6 to increase pay for New Jersey poll workers to $300 from $200 for in-person voting.

“Our poll workers are an essential component of our elections in ensuring our voters are able to exercise their right to vote,” said Murphy at time he signed the executive order. “Early voting coupled with an increase in pay for poll workers is critical to maintaining the accessibility, security, and safety of this upcoming election.”

Additionally, the order increased pay during the voting period by a commensurate hourly rate in an effort to incentivize poll workers to participate in the early voting period.

“We must do everything we can to ensure we have adequate staffing for this year’s election and beyond; poll workers play a critical role in our democracy,” said State Sen. James Beach (D-6).

“Polls are open from 6 a.m. to 8 p.m., but poll workers are oftentimes there much earlier and later than those times,” continued Beach. “This increase will be more reflective of the work they are tasked to do, including setting up and closing polls, signing in voters and helping them operate the machines.”

Under the order, poll workers would no longer be limited to serving only within the county in which they reside.

The move was seen as a further development in the Garden State’s move towards expanded voting access.  In March, the Governor signed into law legislation that would require early voting hours in each of the state’s 21 counties, mandating three to seven polling places for machine voting in the days before an election.

At the time, Murphy said the move would protecting residents’ right to vote and would boost the democratic process within the state.

“Our democracy wins when we open the doors of our polling places wide instead of slamming them shut,” he said.

Additionally, the number of early voting sites in each county would depend on the number of registered voters within the county, and designated polling places would be required to open for early voting on Monday through Saturday from at least 10 AM to 8 PM.

“New Jersey reminds the nation that our democracy is made stronger when we make it easier for the people’s voices to be heard,” said Murphy.

As for those that have passed, the state reported 29 confirmed deaths, bringing that total to 24,850. The state listed probable deaths at 2,803, bringing the overall total to 27,653. State officials noted 14 deaths occurred in the last 24 hours of reporting that have not yet been lab confirmed.

The state reported 895 patients were hospitalized; by region, there were 273 in the North, 266 in the Central and 356 in the South. Of those hospitalized, 219 are in intensive care units and 117 on ventilators. A total of 117 patients were discharged in the last 24 hour reporting period.

In regards to cases related to in-school transmissions, the state has tracked 96 school outbreaks and 521 cases in 84 school districts linked to those outbreaks since the 2021/2022 school year starting Aug. 7, up 27 outbreaks and 142 cases from the week previous. According to state officials, the cases account for 444 students and 77 teachers across 19 counties.

Health officials noted 167 long-term care facilities are currently reporting at least one case of COVID-19, accounting for a total of 1,327 of the cases, broken down between 718 residents and 609 staff.

The state’s official death total will now be reported as those that are lab confirmed, sits at 8,573 on Oct. 13. The facilities are reporting to the state 7,983 residents deaths and 146 staff deaths.