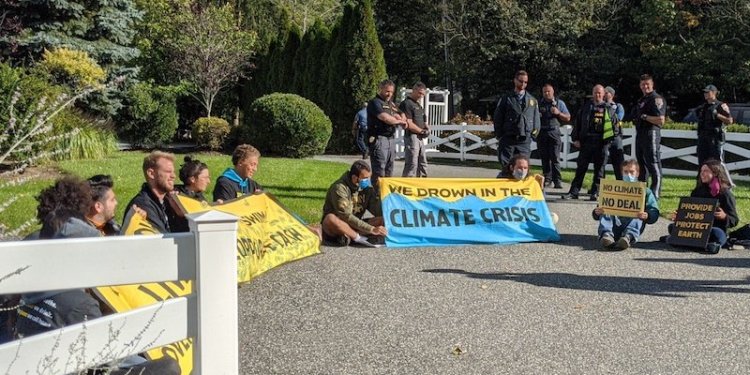 Twelve individuals who are not residents of the 5th Congressional District were arrested at Rep. Josh Gottheimer’s home for trespassing while protesting on Oct. 18.

The protest was organized by an affiliate of the Sunrise Movement, a far left group that advocates political action on climate change including the Green New Deal and is supported by Gottheimer’s primary challenger from the left in 2020. The 12 were arrested at the house while the Congressman was not there.

A press statement from a Gottheimer spokesperson thanked the timely action of the Wyckoff police department in arresting “several individuals for trespassing and refusing to leave Josh’s home. Occupying a Congressman’s property crosses a line of basic decency and, in this case, left his family concerned for their safety.”

A press release from the Wyckoff Police Department said at 1:00 PM, a group of approximately 40 people organized by a Sunrise Movement affiliate met at a park in the township. Police said they closely monitored the group as they walked to a nearby residential neighborhood and were advised to not block any roadways or enter onto any private property.

The police report stated an individual who identified herself as the law enforcement liaison for the group advised that certain demonstrators had assembled with the intent of being arrested. After attempts by law enforcement to de-escalate the situation and several warnings were issued, twelve of the demonstrators ignored police orders to vacate the private driveway that they had entered and were led away in handcuffs.

Of the twelve arrested, only two were from New Jersey— Beth E. Keenan of Robbinsville and Richard C. Avvenire of East Brunswick. Half of those arrested were from Pennsylvania, with three from New York and one from Michigan.

Sunrise organizers contended that speakers included current high school and college students in Gottheimer’s district. On the Twitter account of one of the organizers, Veekas Ashoka, the protestors said their homes were ravaged by Hurricane Ida but Gottheimer “refuses to fight…to prevent climate disasters in the future. NJ young people have tried to call (Gottheimer), they’ve tried to email him, but he doesn’t answer. They’re not here because they want to be, they’re here because it’s their only option left to reach their rep.”

The Bergen County Hub of the Sunrise Movement started a Go Fund Me for those arrested. In their statement asking for donations, it states “The Build Back Better Agenda would invest in our communities and give us a shot at a livable future. But a small handful of corrupt Democrats led by Rep. Josh Gottheimer in the House are selling off that future in exchange for corporate cash.”

Battle Over the Budget

The arrests come at a point where progressives have to place the blame for a lack of budget deal on the Moderate wing of the Democratic party. Gottheimer has been one of their targets after pushing for and getting a date for on a vote for the Infrastructure Investment and Jobs Act separate from the reconciliation budget deal with Speaker of the House Nancy Pelosi—a vote that was ultimately shelved because the left wing of the party said they would vote “no” until a budget deal is secured.

The congressman has faced portesors from different left-leaning organizations at his Glen Rock office, at different private events and when he has held press events across the district.

Among those that publicized the actions at Gottheimer house was Arati S. Kreibich, the former Glen Rock councilwoman who was backed by Squad member Rep. Ayanna Pressley (D-MA), in the primary last year.

Kreibich, who won the Sunrise Movement’s endorsement in 2020, posted on Instagram the day before promoting the demonstration that was to take place at the congressman’s home. Calling Gottheimer one of the “few corporate-backed Democrats …standing in the way” of a budget deal that address climate change, Kreibich highlighted that “Sunrisers from all over the Northeast will gather” the the congressman’s home in North Jersey and that “We won’t stop until he hears our demands.”

While protestors believe fighting climate change is not a priority for the Congressman, as recently as Oct. 15 Gottheimer stated that climate change provisions in the reconciliation budget are of equal importance to him as getting the infrastructure bill voted on. He noted both bills include important monies to combat climate change.

“The Build Back Better (bill)…includes robust climate provisions that build on what is already included in this bipartisan infrastructure bill,” said Gottheimer at a press event in Oradell to highlight boosting electric vehicle charging infrastructure in North Jersey as well as provisions to protect air and water last week. “As we continue to work on the reconciliation package and make sure that it’s great for Jersey, I’m fighting to ensure that climate provisions will not get left behind. They have to be part of whatever end product we come to.”