Democrats hope to have a deal completed this week 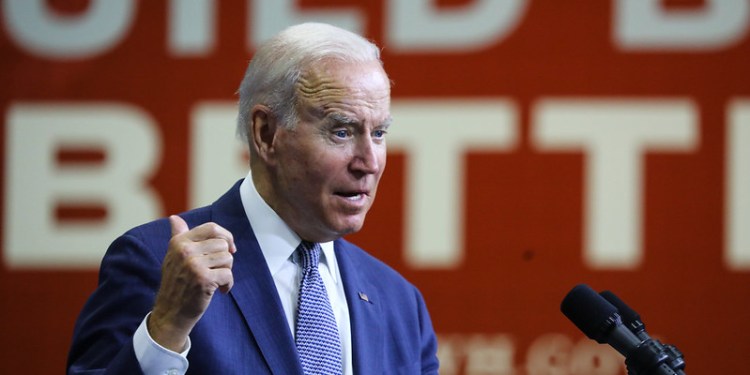 As Democrats attempt to put the finishing touches on a reconciliation budget before two key governor elections next week, President Joe Biden came to New Jersey to sell his party’s commitment to infrastructure.

President Biden joined Gov. Phil Murphy and a host of North Jersey lawmakers at the NJ Transit Meadowlands Maintenance Complex in Kearny Oct. 25  to highlight the importance of passing the Bipartisan Infrastructure Bill and the Build Back Better Act for North Jersey for projects such as the Gateway Project’s Portal North Bridge.

“We are going to make sure projects like this are just the beginning,” said Biden during his speech in Kearny. “We haven’t passed an infrastructure bill in a decade. We need to get this done.”

The event was billed as a groundbreaking ceremony for construction of the Portal North Bridge. On Oct. 12, NJ Transit’s board officially approved a $1.6 billion contract to replace the bridge, which often gets stuck and delays tens of thousands of commuters. Biden noted that when the swinging bridge is not aligned correctly, a worker needs to manually put it back in place using a sledge hammer.

“Since the Portal Bridge was built, it has become the busiest rail span in the entire Western Hemisphere. Today, we are moving forward on a new bridge so that it will be higher over the water, so it won’t need to open and close, and allow us to increase speed, safety, efficiency, and capacity. It’s going to make life a lot better for New Jersey’s commuters,” stated the President.

The new bridge to be built is a two-track, high-level, fixed-span bridge experts say will improve service and capacity along this section of the Northeast Corridor, rising 50-feet over the Hackensack River and to allow marine traffic to pass underneath without interrupting rail traffic.

“When the Portal Bridge was built, it was state-of-the-art, (but that) was 110 years ago,” said the President. “Today, it’s been called something different: a chokepoint, a bottleneck, an Achilles’ Heel to the Northeast Corridor.”

The modernization and replacement of the bridge is the type of project Democrats say will receive priority in the infrastructure bill awaiting a vote in the House.

“The infrastructure bill is about rebuilding the arteries of America, and the Portal Bridge Project is showing why investments like this are so important,” said Biden.

During his remarks, the President singled out Rep. Josh Gottheimer for his role in attempting to get both the infrastructure and budget bills done, calling him “the best go-to I’ve had trying to get this all done.”

Gottheimer stated Biden’s trek to New Jersey highlights the importance of getting both the infrastructure bill and a “smart” reconciliation bill across the finish line.

“With the Gateway Tunnel, SALT, accessible childcare, climate provisions and two million jobs a year on the line, it is great to join President Biden today” said the Congressman in prepared remarks. “I am optimistic that we will see all these critical Jersey priorities move forward this week, helping to get shovels in the ground and people to work. For New Jersey and for the whole country, we simply can’t afford to wait any longer”

Rep. Bill Pascrell in introducing the President said “The Portal Bridge project will ease millions of lives. New Jerseyans waited a long time for this day (as) prior administrations here in New Jersey and Washington derailed our progress.”

“This is more than eliminating missed connections or trains delayed by a stuck bridge,” Pascrell added. “It is about getting parents home to relieve childcare, have dinner with the kids, or help with homework. Quality of life here in New Jersey will improve because of decisive and effective leadership here at Portal, and through the physical and human investments we will make in the Build Back Better and Infrastructure plans.”

The President praised his fellow Democrat Murphy for being a leader on many of the national challenges his administration is looking to tackle with the investments earmarked in the two spending bills, including education and climate change.

“For most of the 20th Century we led the world by investing in ourselves, in our people,” said Biden. “The decision to invest in our children and families is why we led. But somewhere along the way we took our eyes off the ball.”

Murphy noted that the bridge built at the dawn of the 20th century had more than served its purpose.

“Now, it is time for us to give our region the modern, safe, and reliable infrastructure that a 21st century economy demands,” said Murphy. “That’s exactly what the entirety of the Gateway Program will do.”

The President also praised Rep. Mikie Sherrill for her work, calling the Morris County resident one of his favorite members of Congress.

“The Portal North Bridge is an instrumental part of the larger Gateway Project, which is the most crucial infrastructure project in the nation,” said Sherrill in a press statement afterwards. “I’ve fought tooth and nail to ensure this project moves forward alongside many of the federal and state officials here this afternoon. Today, we’re closer than ever to delivering this badly needed investment to the people of New Jersey and the entire nation.”

The visit by President Biden comes as lawmakers in Washington appear to be closing in on a budget deal that includes removing the state and local tax deduction cap.

President Biden said hopes to have a deal in place before leaving for Europe on Oct. 28. He met with Sen. Joe Manchin over the weekend and Speaker of the House Nancy Pelosi (D-CA) said Democrats “have 90% of the bill agreed to and written.” The President stated to reporters before departing for the Garden State that the talks “went well. A few more things to work out, but it went well….With the grace of God and the goodwill of the neighbors (we will have an agreement).”

The President’s first stop in New Jersey was at an elementary School in North Plainfield, to promote his call for establishing universal preschool for all American families. The White House said Biden’s plans would enable North Plainfield’s school district to expand free preschool to all 3-year-old children, not just the 4-year-olds currently taking part in the program.

“A significant number of these kids, because of you, are going to be going to college,” Biden told educators during the visit.

In New Jersey, about 140 school districts receive funding from the state budget and Murphy has looked to expand it to approximately 300 districts in New Jersey that still don’t have preschool programs.

The President interacted with the students, playing with legos and hearing what they hoped to be when they grew up.

He joked with the students by pointing to Murphy and stating “See this man here? He runs the state.”

Then without missing a beat, he turned the students attention to New Jersey’s First Lady Tammy Murphy and quipped, “And this is his wife, who runs him.”

While not a campaign event, the arrival in New Jersey was the third high profile Democrat to appear with Murphy in the last 10 days. The trip by President Biden comes after his wife and former boss made recently made campaign stops with Murphy. First Lady Dr. Jill Biden visited New Jersey Oct. 15 and former President Barack Obama rallied voters in Newark on the first day of early voting Oct. 23.

“I’m here today, New Jersey, because I believe you will make the right choice,” Obama said during his speech. “I believe you’re going to show the rest of the country and the world that we’re not going to indulge our worst instincts… We’re going to move forward.”