“The Administration has never had plans nor is it making plans for a blanket COVID-19 mandate.” 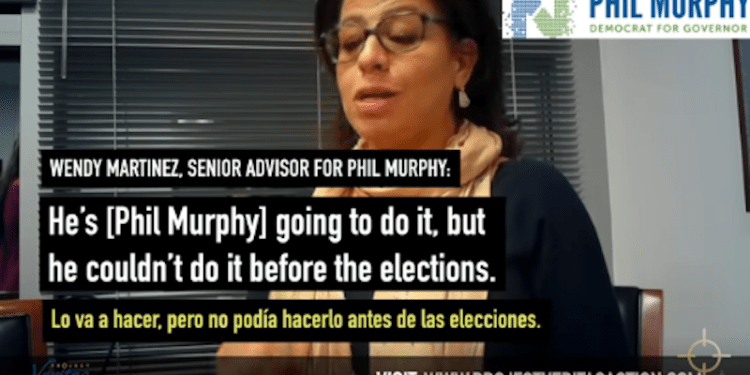 Gov. Phil Murphy is not planning a blanket COVID-19 vaccine mandate on Nov. 3.

That statement comes after a controversial conservative activist group released secretly recorded video showing Murphy campaign aides saying that the governor would impose broader vaccine mandates after the election is over.

In a prepared statement to The Lakewood Scoop, the Governor’s office stated “This video does not depict any member of the administration or anyone involved in public health policy….The Administration has never had plans nor is it making plans for a blanket COVID-19 mandate.”

At a press briefing on Oct. 27, the governor reiterated that any decision on a COVID-19 vaccine mandate would be based on science and data. “I would never say heck no to anything. We still have to leave options on the table, particularly if this thing takes a turn for the negative.”

“The package we have in place is working,” said Murphy in regards to the four mandates for fully vaccinated or regular testing he has made through executive order. “We just don’t—at the moment, we just don’t need (a blanket mandate). We have made every call based on science fact and data. That is a commitment I will make.”

Murphy added later, “We have not let politics ever creep into this, and we won’t. That is a commitment I will make whether it’s before Tuesday, after Tuesday, win, lose, or draw. We just will never let that happen, I promise you.”

Murphy’s first vaccine mandate went into effect Sept. 7 for all workers in New Jersey hospitals, long-term care centers, prisons, and a number of other state and private healthcare facilities and high-risk congregate settings. The second was by Oct. 18 for school staffers and state workers.

The fourth will go into effect Nov. 1 for childcare workers. The governor signed that executive order Sept. 20 that requires all childcare workers and facility employees in childcare settings. And the day before, over the objection of GOP lawmakers, the State Capitol Joint Management Commission voted 5-2 along party lines to mandate all persons who wish to enter the Legislative State House, on committee days, voting sessions, quorum calls, and for any other meetings or gatherings be vaccinated ot subject to testing.

The issue has come to the forefront in the waning days of the 2021 gubernatorial campaign between the incumbent Murphy and GOP challenger Jack Ciattarelli.

The controversial conservative activist group Project Veritas this week released a secretly recorded video showing Murphy campaign aides saying that the governor would impose broader vaccine mandates after the election is over.

Wendy Martinez, a consultant hired to work on Murphy’s campaign, says on the video there would definitely be a mandate “but (the Governor) couldn’t do it before the elections. Because of the independents and the undecided…right now is about him winning,” Martinez says in Spanish.

A second individual, Matthew Urquijo, manager of a coordinated campaign called Forward 2021 funded by the New Jersey Democratic State Committee, said Murphy is delaying the mandate “because, you know, for some people that’s going to piss them off. I think once, you know, we have a win, he’s like, ‘Alright, guns blazing, like, who cares, I’m in it. Let’s do the mandates, let’s do this, X, Y, and Z’.”

Campaign Back and Forth

The video was produced by Project Veritas and its founder, James O’Keefe, who have been banned from social-media platforms after being accused of sharing people’s private information in videos, operating fake accounts and for selectively edited videos to misrepresent the context of the conversations and the subjects’ responses.

Murphy campaign manager Mollie Binotto and Democratic State Committee executive director Saily Avelenda called on Ciattarelli to denounce an alleged separate intimidation and harassment incident by members of Project Veritas. On Oct. 25, two Latina staff members say they were lured into a parking garage by O’Keefe and five of his colleagues. An operative had called the staffers by phone claiming that one of their cars had been struck in the garage—then swarmed and chased them.

The New Jersey Republican State Committee’s reaction never mentions the video but pushes the narrative that “a second Murphy term will bring about the same type of vaccine passports seen in Bill de Blasio’s New York.”

Murphy reiterated at the press briefing that while thankful numbers in the Garden State were improving, he was open to COVID-19 vaccine passports but “equity issues” in communities of color have to be solved first.

State officials reported boosters and third shots of 351,409 for Pfizer and 106,817 for Moderna. A total of 1,518 New Jerseyans have received their Johnson & Johnson booster shot.

As for those that have passed, the state reported 33 confirmed deaths, bringing that total to 25,115. The state listed probable deaths at 2,814, bringing the overall total to 27,929. State officials noted nine deaths occurred in the last 24 hours of reporting that have not yet been lab confirmed.

The state reported 792 patients were hospitalized, the first time under 800 since Aug. 14; by region, there were 238 in the North, 234 in the Central and 320 in the South. Of those hospitalized, 196 are in intensive care units and 96 on ventilators. A total of 97 patients were discharged in the last 24 hour reporting period.

In regards to cases related to in-school transmissions as of Oct. 27, the state has tracked 137 school outbreaks and 715 cases linked to those outbreaks since the 2021/2022 school year starting Aug. 7, up 11 outbreaks and 57 cases from the week previous. According to state officials, the cases account for 613 students and 102 teachers across 19 counties.

Health officials noted 157 long-term care facilities are currently reporting at least one case of COVID-19, accounting for a total of 1,360 of the cases, broken down between 712 residents and 648 staff.

The state’s official death total will now be reported as those that are lab confirmed, sits at 8,622 on Oct. 27. The facilities are reporting to the state 8,004 residents deaths and 145 staff deaths.